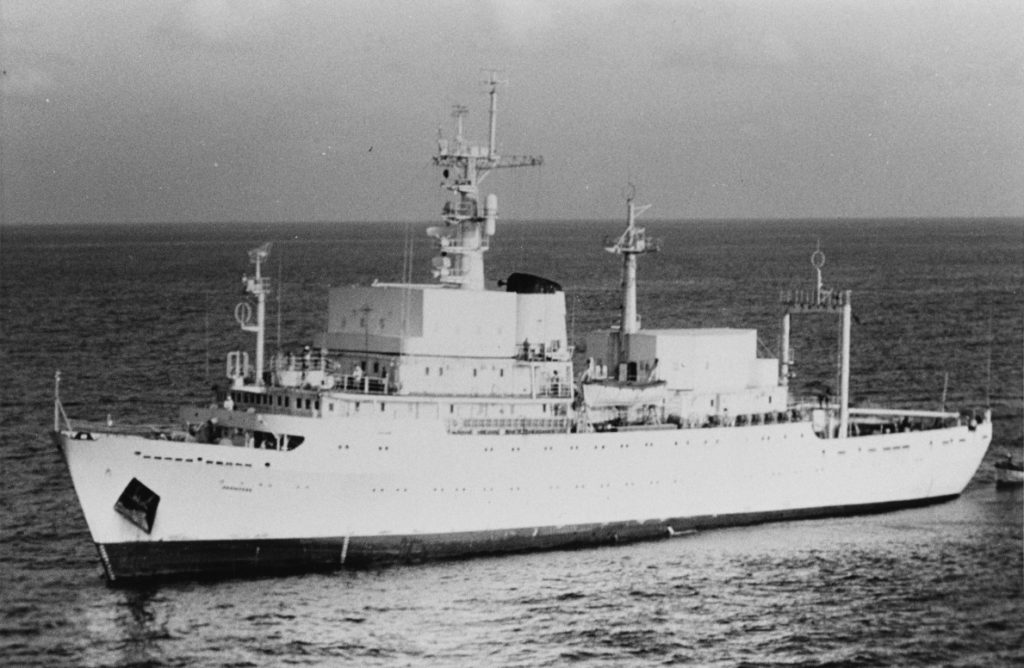 The spotting of a Russian surveillance ship 70 miles off of the Delaware coast is reminiscent of the Cold War. Of note back then, bathers on East Coast beaches could frequently spot the trawlers with the red stack bearing the familiar hammer and sickle. Back then, the U.S. only claimed three miles for territorial waters. Now it’s twelve miles.

Perhaps the first time the American people were made aware of this close Russian presence was a press conference in May 1960 where the U.S. Navy revealed the late April presence of a Soviet spy trawler off the U.S. East Coast. Noting the craft’s similarity in appearance to fishing trawlers lying off the Newfoundland Grand Banks, a naval intelligence officer displayed large slides of the vessel Vega, pointing out eleven portable antennas protruding from a van mounted on the bridge. The Navy’s Chief of Information (CHINFO), Rear Adm. Charles Kirkpatrick, complained that at one point while off Long Island, the 600-ton trawler attempted to interfere with the recovery of a dummy missile by a Navy tug participating in a Polaris missile-firing maneuver. Kirkpatrick emphasized that the trawler remained unmolested because of its location in international waters: “We are a legal people and abide by international law.”

Although the Navy’s press conference attempted to portray the Soviet spy trawler as a new provocation, by 1960 the presence of these rugged little ships on the world’s oceans had become a fact of life for Western navies. The Intelligence Directorate of the Alaskan Air Command first became suspicious of the function of a group of “trawler-type” vessels in the summer of 1955. The question posed was: “Have the Soviets set up a line of picket ships in the Bering Sea, for offshore surveillance and early warning?” Throughout the spring and summer of 1955, Navy P2V Neptunes lifted off to determine an answer. From May through August, the Navy patrol planes made twenty-seven sightings of vessels so equipped to lead intelligence officers “to speculate the possibility of a primary purpose other than fishing.” Operating in waters not usually frequented by the Soviet fishing fleet, only one of the spotted vessels appeared to have nets in the water. Some of the vessels had nets and fishing equipment stowed on the deck while others had no nets or net floats in sight.

Eventually, Western navies designated these “trawler-type” vessels as Auxiliary, General, Intelligence (AGIs). During the late 1950s, the Soviets built more of these ships, using trawler designs for blueprints. Trawler designs were adaptable because the insulated refrigeration compartments provided ideal space for electronic equipment. Trawlers also possessed the necessary stability for operating in heavy seas. During the 1960s, AGIs became a common sight off American submarine bases, at shipping choke points, off Cape Canaveral, near test facilities such as those at c, and among U.S. Navy carrier task forces. Because of the assertiveness of some of these spy ships in gathering intelligence, many American skippers probably believed that “be a nuisance” must have been part of the AGI mission statement.

In a 1972 study of six years’ worth of incidents involving Soviet ships and aircraft on the high seas, thirty-two of seventy-nine cases involved one or more of these spy ships. However, this number probably represented only a fraction of the actual instances in which one navy’s ship maneuvered so as to impede the movements of the other navy’s ship because higher command authorities did not receive incident reports. Those that were reported often became a subject of diplomatic notes passed between the two governments.

A former commander of a destroyer stationed in the Tonkin Gulf in 1965, Robert P. Hilton, Sr., observed that Soviet AGIs had a habit of cutting across refueling formations and cutting across carrier bows. He added, “I think they were a little reluctant to cut across the bow of a carrier going at full speed because I think they discovered that if the carrier had the right of way, it was not going to alter course.” Hilton further explained that task force commander assigned destroyers to keep the AGIs out of the way, using shouldering tactics if needed. He noted, “Of course, we were instructed to comply with the rules of the road even when it came to shouldering.” 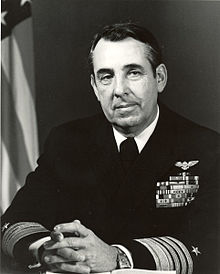 There is no record of collisions between aircraft carriers and AGIs. In a game of chicken between a truck and a motorcycle, the fellow on the motorcycle invariably gives way. Thus, many carrier skippers maintained course and speed when challenged by an oncoming Soviet trawler. Some carrier skippers even took deliberate steps to let the uninvited guests know that their mischief-making was not welcome. Captain James L. Holloway III, acted with assertiveness in 1965, when he took Enterprise on its first combat deployment to Vietnam. When the Soviet eavesdropper showed up in the Gulf of Tonkin, Holloway ordered the 90,000-ton carrier to flank speed and headed right for it, “And he got the hell out of our way.” Holloway would continue to use that tactic to keep AGIs at bay. Still, Soviet AGI harassment of Enterprise would eventually be discussed at a diplomatic level. Over in the Mediterranean, Commander U.S. Sixth Fleet Vice Admiral William I. Martin commented in 1967 on Soviet AGIs in the Mediterranean stating, “There have been times when Russian electronic intelligence ships have moved in the way seemingly to embarrass us; either we change course or [we would] ram them.”

Surface ships also took measures to avoid observation. Admiral J. P. “Blackie” Weinel recalled one deceptive measure employed while he commanded the aircraft carrier Ticonderoga when he wanted to conduct some nuclear weapons-related exercises. Somewhat concerned that the nearby Soviet spy trawler that steamed within his task force formation might obtain intelligence on U.S. tactics, Weinel desired to get the AGI out of the vicinity. Ordering one of his destroyer captains to divert the AGI, Weinel admired the scheme that was employed. Sailors on the destroyer took a frame of a bunk with the springs and tied a line to each corner. The sailors lowered the bedspring in the water and then pulled it up. One sailor stood by wearing a set of big earphones and wrote down notes on a clipboard. After a while, this routine caught the AGI’s attention, and the Soviet stayed with them for the next day while Weinel went off and completed his exercises. Reflecting, Weinel wondered what Moscow thought of this intelligence data.

Eventually, in May 1972, the United States and the Soviet Union signed an Agreement for the Prevention of Incidents at Sea. The accord is still in effect and has succeeded in moderating the behaviors of the two navies. When an alleged incident does occur, such the recent buzzings by Russian aircraft of the destroyer Porter operating in the Black Sea, communications mechanisms are in place through naval attaches for an immediate exchange of information, and an annual review meeting is held each year to discuss the incident further.