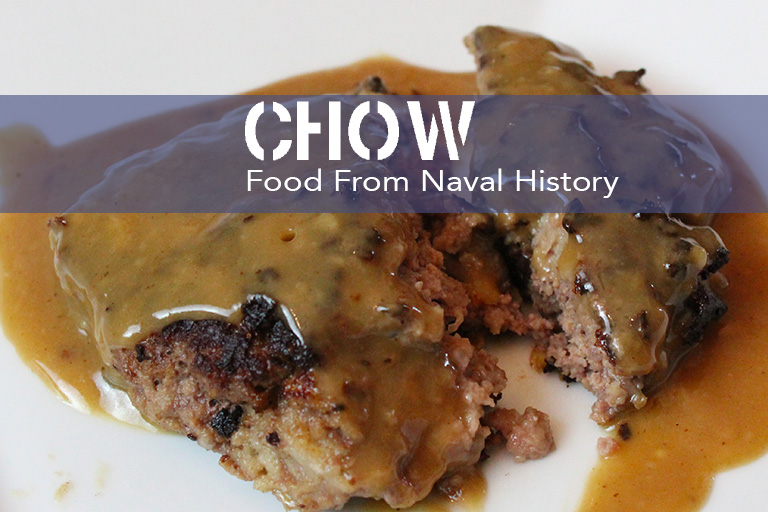 CHOW is a blog and video series exploring the history behind U.S. Navy culinary traditions.

GREASE is the word. At least when it comes to preparing a staple in the chow halls of the Navy and the middle school cafeteria: Salisbury Steak.

When I was looking for a new food staple for the new CHOW video, my coworker John piped in immediately. “You should do Salisbury Steak,” he said, “we ate that so much when I was on submarines.” I was intrigued. I ate the meat and gravy concoction throughout my childhood, mostly from the school cafeterias of my youth and loud, greasy spoon diners from my college years.

“I take it you enjoyed it then,” I said. I liked where this was going. It may not be as popular as S.O.S., but it’s certainly something that sailors could identify as familiar.

I was sold. Some call it a hamburger steak. Others call it “trail markers.” It’s all chow to me.

A Checkered Past: From Fad Diet to Navy Cook Books 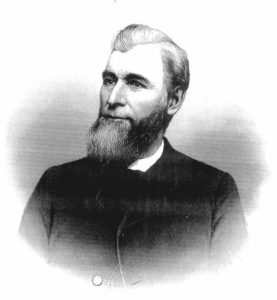 The Salisbury Steak has one of the more interesting histories. As the Smithsonian pointed out in an article on Civil War health food, the gravy-soaked potteries could be considered one of the earliest versions of a fad diet. According to the article, Dr. J.H. Salisbury was a firm believer that food was a central part of a healthy and balanced diet. He believed that certain foods could cure illness, with most of the sickness deriving from an individual’s intestines. A healthy gut was the road to wellness, he would say. He tested his theories during the American Civil War, using chopped meat as the main source of diet. In a world where Dr. Atkins would not be born for another seventy years, Salisbury was a trailblazer.

In fact, he was nearly fanatical about the health benefits of a meat-based diet. Fruits and vegetables were considered ailments to a healthy lifestyle and gut health, making your stomach “flabby and baggy.” His devotion to health and wellness was if it came straight out of the “John Harvey Kellogg Battle Creek Sanitarium” playbook. After years of research, he published his 1888 book, The Relation of Alimentation and Disease. The supposed low-carb, weight loss beef recipe is included in several sections of the book.

In his chapter “Drinks, Food, Baths, Exercise and Clothing Advisable in Consumption,” Dr. Salisbury explains the health benefits of the original “Salisbury Steak:”

“Eat the muscle pulp of lean beef made into cakes and broiled. This pulp should be as free as possible from connective or glue tissue, fat and cartilage [. .] The pulp should not be pressed too firmly together before broiling, or it will taste livery. Make the cakes from half an inch to an inch think.”

Somewhere down the line in the following decade, the Salisbury Steak began to gain popularity and started to appear in Navy Cookbooks. The 1904 Cookbook of the United States Navy lists the dish as a “Hamburger Steak.” The majority of staple ingredients, several added from the original simplicity of J.H. Salisbury, remained unchanged over the years: ground beef, bread crumbs, onions, salt, and pepper. Unlike the original recipe, the one included in the 1904 cookbook called for a gravy made from the beef fat, water, flour, and ketchup. Once incorporated and thickened, the gravy was spread atop the griddle patties. This is the more familiar modern interpretation of the classic dish.

The recipe remained relatively unchanged in Navy cookbooks over the years, besides the name. The common saying was that “hamburger steak” sounded too German for Americans during WWI, which prompted people to call it by its originator, hence “Salisbury Steak” became synonymous with a bun-less hamburger.

There are several interesting additions before the famous 1945 recipe. The 1932 version, which was the first time the Navy used the term “Salisbury Steak,” called for chopped celery to be added into the ground beef mix and fried in suet. J.H. Salisbury would certainly scoff at that.

I decided to use the recipe for “Gribble-Broiled Salisbury Steaks” from the 1945 Cookbook of the United States Navy. The recipe remained unchanged from the 1944 Cookbook. 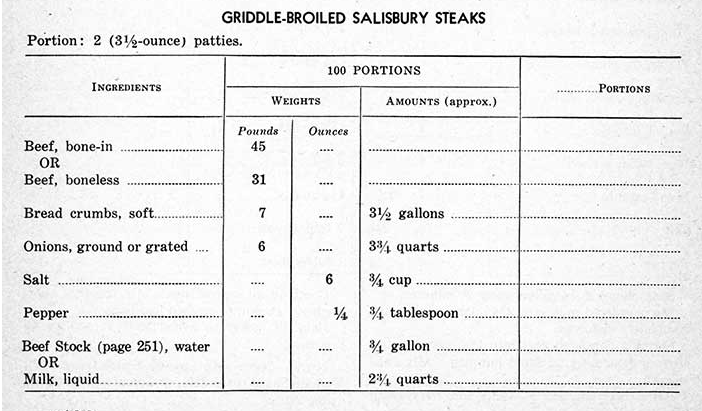 As always, I did not intend to make 100 servings of griddle beef for myself. I once again used dimensional analysis for a tenth of the order. This amount would be perfect if you are making Salisbury Steaks for a large number of people:

I decided to half that recipe. The half recipe of that (serves 5) is as follows: 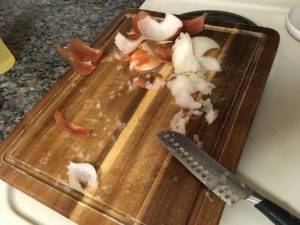 As far as recipes go, this one is relatively straightforward. It is almost like making a bunch of hamburgers for the grill. The only problem I encountered was grating the onion. You’d be surprised how much onion it takes to get a half cup. By the time I fully shaved off a medium onion, I looked like I had just watched the ending to Steel Magnolias. The smell of onions was overpowering. In fact, my kitchen still reeks of it two days later. After I had dried my tears, I began assembling the patties, making sure to “mix all ingredients lightly, but thoroughly,” as the instructions from 1945 stated. The patties were roughly 3.5 oz. each, with a thickness of around one inch.

Unfortunately, I do not own a flat-top griddle, especially for orders exceeding my small family. After looking online, a simple fry pan sufficed as a substitute. A word of warning, however. Make sure your pan is nonstick. That will avoid quite a bit of hassle once the cooking is over, as you will see in the demonstration video.

After the meat had been assembled, I began to griddle them off on the frying pan. According to the directions, even cooking would cook the steaks for approximately 12 minutes. Mine took around 8-10, depending on how many times you wanted to turn the meat. The meat patties were often hard to control, most likely due to the inclusion of beef stock into the mixture, which made them very wet. If you want a more defined steak without the problems in handling, I would suggest a few more bread crumbs.

The other issue was handling the grease. The grease splattered everywhere on a medium-high heat setting. It made me wonder how the Navy cooks dealt with the extreme heat and grease splatter on large flat top griddles. There was A LOT of grease once the steaks finished, so I had no issue with the two tablespoons needed for the gravy. The simple solution of fat, flour, and broth made for a gravy with a golden-brown color and pleasing thickness. Stir on medium-high heat until it begins to boil lightly, then turn down to a lower setting to simmer and thicken.

Of the three previous CHOW recipes, the steak was by far the most pleasing. It brought me back to my younger years, eating the griddled mystery meat with a scoop of mashed potatoes on the side. The taste of the meat was crisp on the outside, and tender in the middle. Although I love the taste of onion, my wife felt it was far too overpowering for her tastes. 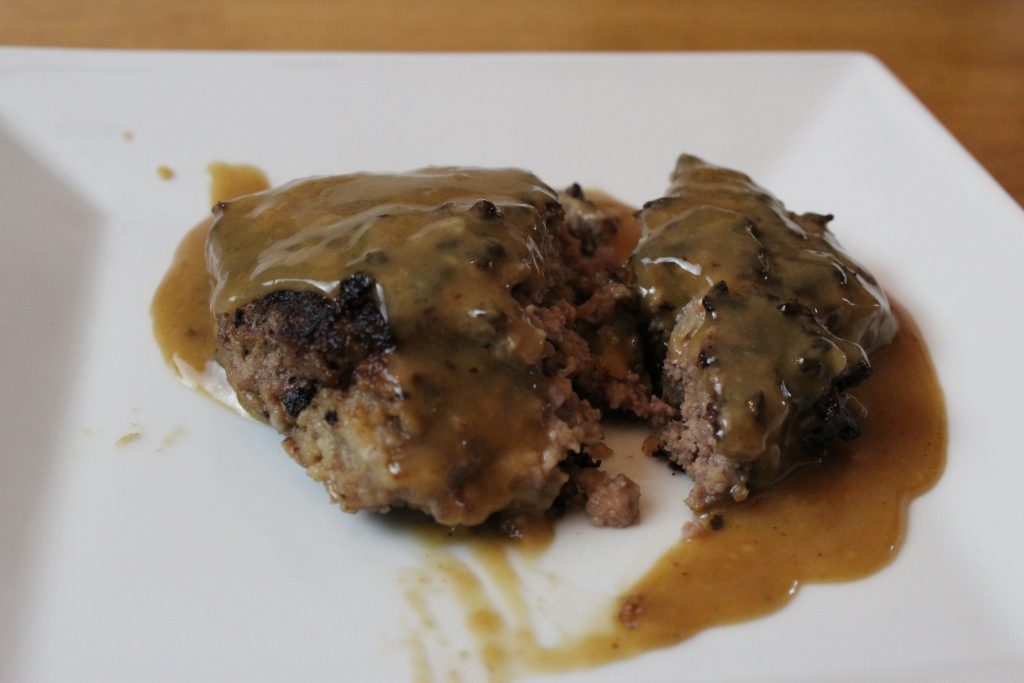 The gravy reminded me of the semi-coagulated KFC variety. A far cry from the Navy’s giblet gravy or the kind your mom used to make, but certainly good. All in all, the blend of griddled hamburger and thick gravy made for a “mom’s cooking” feel that many sailors assuredly felt throughout their years eating it in the service.

Nearly 130 years after the publication of his treatise, I think it’s safe to say that J.H. Salisbury was wrong: Salisbury Steak is NOT a health food. But it is some darn good Navy CHOW.

If you have your own personal stories about Salisbury Steak, please include your story in the comment section below or email Matthew T. Eng at meng@navyhistory.org. We would love to include it in the ongoing narrative of the social history of the United States Navy.