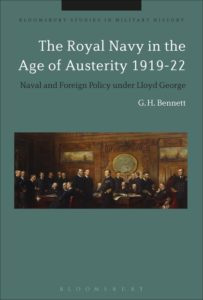 Having successfully met the greatest threat to British maritime dominance since the Napoleonic era, the Royal Navy emerging victorious from the World War still faced an uncertain future. The building programs of formal and informal allies, Japan and the United States, respectively, potentially heralded yet a new challenge to her dominance, but the most immediate danger appeared to be the empty coffers of the Treasury which could not stand the burden of meeting another naval arms race. Payment on the public debt arising from the war was one reason why future naval expenditure would be curtailed, yet it was not the sole determinant. The public’s tolerance of the existing levels of taxation was not unlimited nor for that matter Britain’s ability to borrow. Moreover, the war had brought forth a third military service, the Royal Air Force. Absent any efficiencies availing from a unified Ministry of Defence, the Navy and, more so the British Army, were in for a period of deep retrenchment.

To be sure, the continuing need to spend handsomely on the Navy was not self-evident given the existing strategic setting and the overwhelming position that the Royal Navy then occupied when compared to the other ranking naval powers. In numbers, tonnage, distribution, ashore infrastructure and operational capabilities, the British Navy remained an unequal force, but, more than that, it was a force which now knew of modern war. To the Treasury and most of the Cabinet, such relative superiority argued for financial restraint, especially since Britain had other spending needs requiring more immediate attention. Manifestly, if Britain could not accept a degree of risk in her naval affairs at this moment where else were savings to be made? In truth, throughout the Supply Estimates of government spending and the story ably recounted by the University of Plymouth’s G. H. Bennett in The Royal Navy in the Age of Austerity 1919-22 is of the rearguard action waged by the Admiralty to fashion a coherent naval policy in the immediate aftermath of the World War.

Still, while the Admiralty might propose its preferred policy, it was very much a junior partner in fashioning the policy ultimately adopted. This owed something to the dynamics of cabinet government, the evolving nature of empire, the burdens of finance and the tenor of the times. Bennett’s accounting has these elements very much at the fore, but it does not rise to the level of ‘total history’ which the author posits. That is more observation than criticism for what is presented is a measured and highly readable monograph anchored in sound archival research while taking note of contemporary scholarship. It remains, however, a work constrained by what it omits: a detailed review of the period’s Naval Estimates, a comparison of British ships to their foreign rivals, and a discussion whether the Navy of 1919-22 successfully fulfilled its strategic role and met the operational tasks that it faced.

That which remains is a survey of the period immediately before and following the negotiations in Washington, D.C. which concluded a naval agreement of far-reaching proportions for France, Italy, Japan, the United States and, most germane here, Great Britain. Of course, those negotiations had import beyond naval arms control reflected in the further pacts arising: a Four Power Treaty and a Nine Power Treaty which aimed to resolve a number of Far Eastern issues. The latter agreements, however, were essential for the naval one to proceed and permitted Britain a graceful way of ending her alliance with Japan. That alliance reached in 1902 marked the end of ‘splendid isolation’ for Britain and followed by the establishment of the Entente Cordiale with France had allowed a growing German threat to be faced. With that worry now at bay, the continuing benefits of Japan as an ally were rather less. More directly, that alliance made reaching accommodation with the United States across a host of issues infinitely more difficult. That truth if generally understood did not make the change now required less bitter for some in the Royal Navy owing to the close links and common purpose previously pursued.

Britain’s decline as a power in the post-1918 world has been the subject of much analysis to the point that the inevitability of it is perhaps all too readily assumed by historians including Bennett. That may be how it looks today, but it is not necessarily the view contemporaries shared who could look to the exhausting wars of the Revolutionary and Napoleonic era and view a Britain that had survived, rebalanced financial accounts and then made the nineteenth century its own. Thus, Admirals Wemyss and Beatty, the affected First Sea Lords, and along with their political ministers of the 1919-22 period, Geddes, Long and Lee, had to steer a course that surmounted present difficulties while retaining key capabilities and trust that the promises and agreements reached in 1922 meant what they said. Alas, they did not. The respite purchased at Washington, not unlike Britain’s ‘ten-year rule’, proved difficult to end as prosperity failed to return owing to the period’s economic climate. That takes the story beyond Bennett’s remit, but this reviewer cannot help believe that those later events color his analyses and conclusions as to the propriety of the decisions made earlier in Washington and Whitehall.

Thus, the austerity of 1919-22 was of a relative kind with the years 1931-32 proving to be the real nadir for the Royal Navy during the interwar period. Whatever future problems were being stored-up, Britain and its Navy could take satisfaction from what had been accomplished at Washington: Capital ships were limited to dimensions that Britain’s dockyards could presently support and would not require a wholesale work’s program to build new infrastructure to support a corresponding wholesale replacement of its battleships to match potential American and Japanese designs. Well, not quite. The Royal Navy was singularly deficient in infrastructure in the Far East to support even its existing heavy ships. Thus, the necessity of building a first-class base at Singapore to support the needs of the Main Fleet if ever it were required to operate east of Suez. This sub-plot too receives the attention of Bennett though the conclusion that the ‘Washington Naval Agreement was effectively creating a gap in Britain’s naval capabilities that would require additional government expenditure’ if correct, is also misleading. More would have to be spent absent an agreement at all unless Britain elected to yield its maritime position in 1922 rather than in 1942.

The Royal Navy in the Age of Austerity will appeal to many readers of this forum, though the $114 list price alone will preclude many from engaging its arguments. That is regrettable for Bennett neatly captures an important story of politics, defence and diplomacy married to the problems of sustaining an industrial base in an uncertain world. Of interest to maritime historians, it should be of equal interest to contemporaries weighing today’s maritime challenges and this reviewer warmly recommends its consideration.