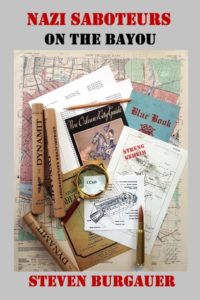 In 1941, the United States was in a “let’s stay out of the European and Asia Wars” mindset; Fortress America will protect us from conflicts continents away. This attitude changed on 7 December 1941.  The USA was — in the words of Franklin Delano Roosevelt in his Day of Infamy Pearl Harbor speech 08 Dec 1941 — “suddenly and deliberately attacked by naval and air forces of the Empire of Japan.”  This attack tossed the nation into a panic with rumors of an imminent attack by Japan on the West Coast adding to the fears of its citizens. To add into the mix of terror, Adolph Hitler launched “Operation Pastorius” in June 1942 when experienced Nazi’s smuggled saboteurs into the United States via German Submarines. They arrived ashore on Long Island and in Florida with the intention of wreaking havoc on the burgeoning war effort.  Thank goodness, the Nazi Saboteurs were caught, tried, and quickly disposed of by a military tribunal.

Steven Burgauer’s newest book is based on that frightening time of uncertainty and obsessional war nerves. The core of this fast moving “I cannot wait to finish the next chapter and find out what happens next” is the group of Nazis saboteurs planning to blow up the Andrew Higgins boat yard in New Orleans. Higgins was the genius who developed the assault boats with the drop-down bow ramps used for landing troops on enemy shores. A significant interruption of this valuable asset would have caused immeasurable harm to the amphibious landings that the U.S. and its allies were planning throughout the various invasion theaters. These familiar boats manufactured at the Higgins yards were the ones seen in accounts of soldiers and marines streaming from them on beaches throughout the world. Indeed, the D-Day landings in France would have been difficult without these Landing Craft Vehicle Personnel (LCVP).  Imagine an American hearing that a strategic manufacturing facility had been blown up by a handful of Nazis. Adding to the nightly sinking’s of our merchant ships just off the Atlantic Coast by German U-Boats; additional panic would have set in among the citizens of the U.S.

However, this book is not only about a fictional plot to destroy these valuable assets of the American war machine. Assisted by Private First Class, Robert DeGise, US Marine Corps, writing about his combat experiences in World War II during the Pacific Ocean, island hopping missions brought an eyewitness to the events at Guadalcanal to the book. Steven dovetails the dates of the Guadalcanal landings using the LCVPs at the same time the Saboteurs are plotting to destroy the boat yards. Robert DeGise was one of those Jarheads who went on shore to fight the Japanese from these very same assault vessels the Nazis planned to destroy in the story. This chronicle of wartime service is but one example of Burgauer’s uncanny ability to use well researched historical facts to create a riveting story using real and mythical characters to make history come alive.  His list of sources is impressive, which could keep a researcher busy for several weeks.

Burgauer has a well-earned reputation for writing exciting books with historical facts intertwined with fiction to make his writings interesting to absorb. See The Night of the Eleventh Sun, The Road to War, or The Last American for more exciting novels.

Chief Cunnally retired USN, is affiliated with the Orange County Regional History Center in Orlando, FL.  He is a graduate of American Public/Military University with a Bachelor’s Degree in American History and is currently pursuing his Masters in History/Archival management.