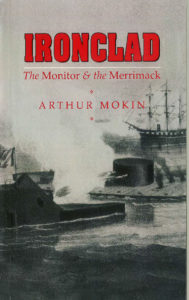 Searching “Monitor and Merrimac” on Amazon brought up twenty-five books of popular history or historical fiction, seventeen of which were in print or available on Kindle, including Arthur Mokin’s 1991 novel, Ironclad. Why so many? Obviously, there are several reasons. The March 9, 1862, battle was a turning point in naval history – the end of four centuries of the domination of the world’s oceans by the wooden sailing warship. Second, it was a duel, exciting and dramatic, fought ship-to-ship at point blank range – much like many sea-fights in the age of sail. While boarding and hand-to-hand fighting typically decided those, engineering and technology were deciding factors for ironclads. Finally, it occurred at a critical point in the Civil War. The previous summer’s defeat at Bull Run spelled an end to Union hopes that the rebellion would quickly collapse, and the failure to resume the offensive (in the east, anyway) cast serious doubt on the Union’s ability to defeat it. The foray of the Merrimac/Virginia into Hampton Roads might have constituted another such disastrous political and psychological blow to the Union and Lincoln’s government if not for the appearance of the Monitor the following day to fight her to a standstill, steal her thunder, and snatch victory from the jaws of shameful defeat. Psychologically and strategically, it was a necessary precondition for the resumption of the land offensive against Richmond in the form of McClellan’s “Peninsula Campaign.”

This story has tremendous appeal for the general reader, even those new to naval history or the Civil War. Many of the books on Amazon might serve as a decent introduction to both fields, but Mr. Mokin’s novel is one of the best choices. Mokin holds himself to a higher standard of historical fiction, to tell the story of real events as experienced by those who lived them. But how do we know we can trust Mokin’s perceptions?

A glance at his bibliography shows some very serious sources, including Gideon Welles’ diary, Seward’s biography by his son, the ten-volume biography of Lincoln by Secretaries Hay and Nicolay, and Church’s 1890 biography of John Ericsson. This impressive research informs his writing, description, and dialogue, and makes them ring true. This is what gives the book its value to the serious student of naval or Civil War history. Naval technology and tactics have no existence outside the world of political events and their human drama; on the other hand, science and technology play a determining role in these developments, starting in the mid-nineteenth century, one might say, starting with the Monitor and the Merrimac. This novel gives rich human and political context to these events.

Mokin tells this story through the minds and actions of his principal characters, particularly Gideon Welles, Lincoln’s Secretary of the Navy. Welles, an amateur political appointee, as a Connecticut newspaperman and Democratic Party supporter of Lincoln. He was shrewd, energetic, loyal, incorruptible, and determined to master his unfamiliar naval responsibilities as quickly as possible – a figure very much like Harry Truman. We meet John Worden, Monitor’s captain, a U.S. Navy hero temporarily blinded in action; John Ericsson, the brilliant Swedish engineer who conceived, designed, and built Monitor; Cornelius Bushnell, his engineer colleague who persuaded Ericsson to offer his plan to the Navy. There is also Stephen Mallory, Confederate Secretary of the Navy, and the driving force behind the makeshift but practical conversion of the steam frigate Merrimac to the ironclad Virginia and her two captains, Buchanan and Jones.

Lincoln himself is the weakest of Mokin’s portrayals, and this is perhaps the only thing dated about the book. He focuses too much on the image of Lincoln as the suffering saint. However, following David Donald’s superb Lincoln (1995), the consensus view has shifted to seeing Lincoln as firm and unwavering of purpose, with masterful political skills, both regarding building national consensus and handling his fractious peers.

The most important lessons relating to the relationship of science and technology to war is John Ericsson. The Monitor, the first turreted warship, was one of the most original warships ever built, wholly novel in her overall conception as well as many, many engineering details – yet she was constructed in four months in record time, with her on the scene and ready to fight just one day later than her opponent. Crucial to this feat was the fact that Ericsson had worked out her design well in advance; he had offered it to France some years before. Then when she was ordered, he had the personal ability and energy to design her in detail and supervise her construction in his own works, working around the clock. A very salutary contrast can be drawn with the early British turret warship HMS Captain which capsized at sea with much loss of life. Capt. Cowper Coles, who has a fair claim to be the inventor of the revolving gun turret, produced her overall design, but he was no engineer; this plus errors introduced by her unsupervised builders left her fatally flawed. Bright and logical ideas from amateurs are no good without the engineer’s mastery of mathematics, mechanics, and materials to make them real. Monitor had few mechanical problems and was ready to fight twelve days after commissioning.

The book has its minor errors and anachronisms. I don’t think nineteenth-century people said “viable,” “technology,” or “weapons systems.” Did anyone ever use the expression “frigate of war”? The author has Monitor‘s crew hoisting shot into the “breeches,” not the muzzles of her guns. Also, the effect of the Monitor’s gunfire was lessened by orders limiting her to the use of half charges. But the author makes no mention of the fact that the effect of Virginia‘s fire was similarly lessened by the fact that she carried only shells and no solid shot since she expected to be encountering only wooden ships. So perhaps this famous draw could have turned out very differently. He also fails to mention that the Union’s first ironclads were the seven “City class” gunboats completed on the Mississippi in January 1862 and in action at Fort Henry on Feb. 6. But these are small things compared to the good things this book offers, above all its portrayal of Welles, Worden, and John Ericsson. Thoughtful, informative, and an excellent read.

Robert P. Largess is the author of USS Albacore: Forerunner of the Future and articles on the USS Triton, SS United States, the origin of the towed sonar array, and the history of Lighter-Than-Air.