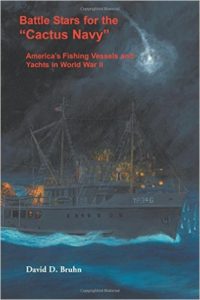 The title advertises David Bruhn’s Battle Stars as a history of the yachts and fishing boats commandeered by the U.S. Navy to plug the holes in American sea defenses at the start of World War II. In addition to offering what ought to be an interesting collection of sea stories, this subject suggests an uneasy similarity to the current state of naval affairs. It is worth noting that in 1940, just after the Germans entered Paris and about the time that Admiral Harold R. Stark, CNO, got Congress to approve a seventy-percent increase to the interwar Navy, there were about 400 ships in commission. By comparison, in June 2015, the size of the U.S. Navy’s active force in commission was 233 ships. Bruhn’s book, then, ought to provide a reminder that sometimes sheer numbers are just as—if not more—important to the accomplishment of national missions as the very latest technological wonders.

Unfortunately, Bruhn may have set himself too difficult a task in attempting to piece together a comprehensive story of this group of impromptu warriors. There are short passages throughout Battle Stars that provide glimpses of the lives of the little boats and their crews, but readers in search of colorful tales that scan the details of life in small ships in the midst of a modern war are likely to be disappointed. Unfortunately, they will find that the actual narrative of the activities of the ex-fishing boats and fishermen is relatively sparse.

Instead, much of the text of Battle Stars takes the form of a survey history of the war mainly composed of the passages that, had there been sufficient material on the patrol boats, would have formed the background to the main story. For instance, in dealing with the actions of the “Cactus Navy” in the battle of Midway, Bruhn devotes about as much space to long quotes about a single search aircraft (PBY) patrol as to all the patrol boat (YP) activities around the atoll. (99-107) Moreover, the PBY story is taken from a web page with the following warning label: “This Page is an outdated, user-generated website brought to you by an archive. It was mirrored from Geocities at the end of October, 2009. For any questions concerning this page try to contact the respective author.” As presented by the text, either there is not much YP activity to report, or the record is too thin to be useful. The reader is told little more than that YPs were stationed around Midway for various duties and that two were eventually lost—one to a defensive minefield and one to unknown causes.

Much of the book follows this approach to the YP story, and where there is an exception to the pattern, Bruhn does not always choose well. For example, he includes a short account of the 75-foot yacht, Norwester, which was co-owned after the war by actor John Wayne. However, even in this brief passage, the only thing related to the boat’s wartime service history is a sentence noting her assignment to southern California waters during the war. (61-62) Instead, the reader learns about various modifications made in the late 1950s long after the war that included increasing the interior headroom to accommodate Wayne’s height and his fondness for wearing a hat onboard. An interesting aside perhaps, but neither this passage nor most of the later text touching on the various battles and operations in the Western Pacific offers much information that relates directly to the activities of the conscripted fishing vessels and yachts.

Seventeen of Battle Stars’s twenty chapters focus on the war in the Pacific Theater. Despite Bruhn’s note in the Preface that the “second half of the book traces the death and destruction wrought by German submarines” in the Atlantic, Gulf of Mexico, and the Caribbean, in fact, only two of the longer chapters cover this major theater before the narrative returns to the Pacific theater. (xxiv-xxv) It is not clear why Bruhn chooses this structure. Perhaps most of the patrol boat action was in the Pacific, though the author does not provide evidence for that guess in the text. The remaining chapter is not assigned to a particular ocean war zone, giving a short overview of the “Patrol Yacht and ‘Yippie’ Fleets instead.”

Bruhn does not seem to have mined all of the available sources for information; otherwise, his bibliography is incomplete. For example, many of the sources cited in the chapter notes, like official war diaries and newspapers, are not listed. Judging by the chapter notes, the author made significant use of the crowd-edited source Wikipedia and other less well-known web pages but gave no indication of the material’s accuracy. Several references that might have been consulted advantageously for this purpose (like Norman Friedman’s U.S. small combatants, including PT-boats, subchasers, and the brown-water Navy: an illustrated design history) are not listed.

Battle Stars touches on aspects of the stories told in The Hooligan Navy by Wesley E. Hall (Writers Press Club, 2001) and in Theodore Treadwell’s Splinter Fleet (USNI Press, 2000) and similar works. However, neither of these books appears to have been consulted, and neither appears in the bibliography. Also uncertain is the extent to which sailors’ organizations or their families were consulted for Battle Stars. Two forewords are provided to the text by individuals with some connection to the events in the book, but in neither case were they veterans of the war. Gus Brenner, president of the Patrol Craft Sailors Association, confirmed that YP sailors would be eligible for membership in the PCSA, but there’s nothing in Battle Stars to show that members of the PCSA were consulted.

As a general survey of some aspects of World War II naval service, Battle Stars is occasionally a diverting read. However, as a book that bills itself as the history of a particular group of ships and of the veterans who manned them, it is disappointing that those sailors and their families will find so little they can identify with and call their own.

Commander Grant served 23 years as a Surface Warfare Officer.  He is a research associate for The Citadel Oral History Program, a former adjunct history professor, editor of Caissons Go Rolling Along: A Memoir of America in Post–World War I Germany by Maj. Gen. Johnson Hagood, and a frequent book reviewer.