The Awards Dinner is the premier event for those who love and serve the sea. Join military leaders of sea services, authors, explorers, philanthropists, and government officials for this special event that honors individuals and organizations who continue to serve our ever-expanding maritime heritage. 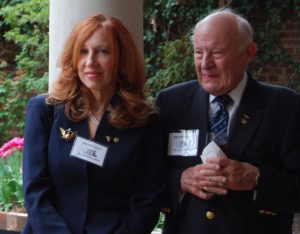 Dr. London served as a naval aviator and carrier pilot from 1959 to 1971, and in the U.S. Naval Reserve until 1983 before becoming the president and chief executive officer of CACI International the following year. Under his tutelage, CACI became a trendsetter in offering IT solutions and consulting services across markets throughout North America and Western Europe. Dr. London is a board member of the United States Naval Institute, Navy Memorial Foundation, and Naval Historical Foundation; he is also a member of NHF’s Admiral James L. Holloway III Society. Dr. London is being recognized for his ongoing leadership on matters of naval history and heritage and for exemplifying NHF’s creed to preserve, honor, and commemorate naval history.

Conservation International is a non-profit environmental organization that has played a significant impact on the health of the world’s oceans and shorelines for the past thirty years. National Geographic is being honored for its achievements in chronicling our relationship with the water and educating countless readers and viewers about global maritime heritage.

Proceeds from the Auction support the educational programming of NHF and NMHS. If you are interested in attending the dinner or sponsorship, contact Clair Sassin, NHF’s executive director, for more information at csassin@navyhistory.org.

We look forward to seeing you in April.