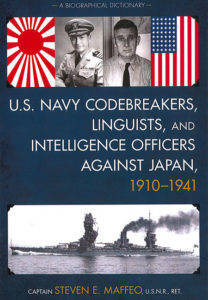 Any leader worth his salt will tell you that the acquisition, interpretation, and proper dissemination of intelligence is arguably the most important key to solving any problem; from identifying what is in front of you to winning at war. Of course, selecting the right information and convincing the command staff to act on it is paramount to being an excellent intelligence worker. The sailors and civilians listed in this work were “that” exceptional.  The work, formatted like a “book of who’s who,” profiles fifty-nine of the most significant of Naval intelligence personnel and their positions during World War II; specifically, in the Pacific Theater. It clearly illustrates how the author is a real student of the field of Naval Intelligence and its history. While reading the detail of each profile, it is evident Captain Maffeo did his homework, though; you would think he knew each personally. I suggest reading his profile at the end of the book; he has quite a resume.

I will start this review with a little background. The opening line in my “Fundamentals of Naval Intelligence” course manual states, “intelligence is the second oldest profession, with fewer scruples than the first.” Like that quote, from some unknown philosopher, implies the acquisition of knowledge of an or potential enemy or intelligence, specifically human intelligence (HUMINT) is arguably one of humanity’s oldest professions and more valuable than pretty much anything else. Governments will stoop to any level and invest expansive wealth to acquire and verify intelligence. Once verified, HUMINT even today, is the most valuable. Before electronic communications such as telegraph and radio, passing source HUMINT was and still is, dangerous. Communicating it is best left to “mouth to ear” or passing a note either, face to face or via dead-drop depending on the level of importance. HUMINT as a whole is also the most challenging and dangerous to acquire and disseminate, yet alone verify. As mentioned, vast amounts of wealth have been spent to establish and develop many internal “cloak and dagger” organizations to fulfill their intelligence needs. In the U.S. Navy as far back as 1882, there were a “few” Navy folks that knew that intelligence was necessary to operate as a successful Navy and established the U.S. Office of Naval Intelligence (ONI); which is the world’s “oldest continuously operating intelligence agency.” It was always small, way underfunded, got little to no respect and/or membership. According to Maffeo being an intelligence officer could hurt the chances of advancement in the naval ranks, which hurt recruiting new intelligence officers. ONI, somewhat covertly, was always on the lookout for people that would benefit them. They would underhandedly advertise by putting crypto/codebreaking games in periodic Naval Communications Bulletins with a request to send the results to the Navy Communications Research Desk. On occasion they would get a reply and track down the perspective “spook” and try to recruit them; even getting one now and then. Since the Navy has always been a “travel agency” of sorts, they also had a decent foreign-language program also used for recruiting. Although they had in-house courses, they rightfully preferred the total-immersion method of sending the aspiring linguist to live in a country. This, in turn, benefitted the student in the spoken and written language, context and interpretation of the language as it related to culture, sociology and economic mentality and many others too vast to list here; but, importantly HUMINT.

The low-tech of the era produced the only true asset, the people; thus the focus of this book. Most of the top pioneer cryptologists, linguists and other “intelligence type” personnel in not only U.S. Naval history but, in the whole of U.S. history, went through ONI during that period. Though, ONI worked on inventing and decrypting codes and interpreting intel from many countries around the world, they and this book centers on Japan, also known as “orange” and the people that analyzed that information. Such people as Mrs. Agnes May Meyer Driscoll a civilian and arguably the most groundbreaking cryptologist, not only of the day but, to date. Such sailors as Captain Lawrence “Sappho” Safford, Captain Tommy Dyer and Captain Joe Rochefort, of Station HYPO/Battle of Midway fame and many more pioneers graced the ONI with their genius. These people worked tirelessly and in many cases Spartan conditions to break down and interpret Japanese codes, determine their importance and convince the proverbial powers that be, as to the value of what they found.

All information is intelligence its value to a particular issue is determined once it is acquired and analyzed. For instance, once HUMINT gets into an Electronics Intelligence (ELINT) system it can become either communications intelligence (COMINT) and/or signals intelligence (SIGINT) depending on context and how and who receives and/or uses it. Within the timeframe of this book, technological developments allowed COMINT, SIGINT, and ELINT to come into their own. Although the U. S. Navy often benefits from the HUMINT, they found COMINT, SIGINT and ELINT more practical; as you won’t “usually” find a dead drop or some spook hanging out on a buoy in the middle of the ocean waiting to pass on intel. As the art of naval intelligence evolved the Navy found that emphasis on counter-intelligence best fit their needs. As the author points out or example, before the Japanese bombing of Pearl Harbor there was a running argument that turned out to be quite significant within ONI. It pertained to a lack of SIGINT within the intercepted Japanese message traffic. Everything was quiet. The argument was: some thought the relative silence was because all of the Japanese Naval assets were in port; the other side of the argument felt they were on the move and at radio silence. After December 7, 1941, everybody knew who was correct. I can go on forever on this subject since almost all of my Navy and civilian career is working with many levels of “spook” so, I’ll cut the background off here.

If you have any interest in U.S. naval history, read this book! Although classified as a biographical dictionary of ONI from 1910 to 1941, the author cleverly builds the history and development of the office and its sub-topics into the bios. Each individual portrait is a standalone. I would suggest you keep it close hand as a reference.

Michael F. Solecki, is an independent naval historian, holds a Master of Arts in Military History from Norwich University, is a veteran of the U.S. Navy and NOAA where he acquired, processed and disseminated environmental intelligence for Anti-Submarine and Anti-Aircraft Warfare and developed consequence management plans for Weapons of Mass Destruction. He is currently an Enforcement Officer and an Emergency Response Incident Commander for the U.S. Government, and he performs technical peer reviews for several publishers of U.S. and Japanese naval history.