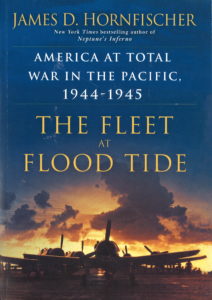 Hornfischer has done it again! Crafting a historical narrative that is a “page turner” featuring personalities and decisions as well as crisp commentary that is not always complimentary to his subjects, he brings the scenes of battle to life. Using the Marianas Campaign as the canvas, he paints portraits not just of flag officers but individual officers, Sailors, Marines and Soldiers on both sides with skill in this overarching tale of the end of the Pacific war. His focus is limited: starting on how the Marianas were targeted in the first place – to provide a base for the Army Air Forces to bombard the Japanese Home Islands – through the opening phases of the occupation of Japan.

The narrative is salted with personal recollections and impressions of individuals on both sides. The characters chosen reflect the wider attitudes and behaviors of the compatriots. The centerpiece is the fanaticism of the Japanese. The battle ashore was dirty, ferocious and difficult against an enemy that neither gave nor asked for quarter. Inoculated with fear and hatred of their enemy with their military leadership projecting their misconduct in the Rape of Nanking onto the Americans, many Japanese civilians preferred suicide over surrender. The shock of witnessing “…the horror of women, children, whole families leaping to their death from high cliffs into the sea” directly influenced American decisions leading to using the atomic bombs.

This history focused on people and tactics, both at sea and land: all fought for the strategic aim of bringing Japan’s Home Islands under aerial bombardment by long-range bombers built for that purpose. The naval maneuvers are straightforward and easy to follow. Those ashore on Saipan defy comprehension because the topography was so difficult. The unit integrity muddied even before the completion of the landing phase, with the Japanese resistance skillful and desperately fanatical. The fighting in the central highlands of Saipan was platoon based, hand to hand, with little room for maneuver or deception. This was a battle, not of generals and colonels, but according to Hornfischer, of “Second Lieutenants and sergeants pushing their men forward into caves.” Although not as bloody, Tinian and Guam were easier to describe.

The air bombardment of Japan-based in the Marianas is the end point of the story of Paul Tibbets – eventually pilot of Enola Gay, the Hiroshima bomber. Tibbet’s story starts with being fired in North Africa for facing down and embarrassing then Colonel Lauris Norstad over bombing a heavily protected port at low level. Saved from court martial by General Jimmy Doolittle, Tibbets was summarily dispatched to create and lead a squadron of B-29 bombers dedicated to the delivery of the atomic bombs. This part of Hornfischer’s story details aviation technology and development, bureaucratic maneuverings and expands into a discussion of the reasoning behind the use of the bomb against Japan on one side and the insistence of the Japanese military clique to fight to the last person on the other. His report of these discussions, set against the backdrop of the slaughter on Saipan arising from the Japanese suicidal mindset cemented the decision to use every means possible to avoid the planned invasion of the Japanese home islands.

Throughout the campaign, submarine reconnaissance played a more significant role than usually portrayed by those books documenting submarine operations during the war. By mid-1944, US submarines regularly reported Japanese fleet movements. These reports became the basis for Spruance’s battle plans in the First Battle of the Philippine Sea. At the same time, submarine sinkings in other histories have been generally portrayed without the context of on-going campaigns by other forces. Hornfischer cites several that had an immediate effect on Saipan’s defense. Trout ambushed a convoy bringing combat regiment from Manchuria – only 1720 of 4000 Japanese soldiers made it to shore. Pintado and Shark sank three large cargo ships with terrible losses of embarked troops. Hornfischer’s analysis, “All the air forces available to Admiral Nimitz couldn’t have done as much in three days against a division of soldiers entrenched ashore as Lockwood’s wolfpacks did in three hours against their transports afloat.”

Professional military men will enjoy the author’s views on the spiteful criticism by aviation admirals of Spruance’s decision to not pursue the Japanese carriers after the Marianas Turkey Shoot and the contretemps around the relief of the Army’s division commander on Saipan by Marine General Holland Smith for lack of aggressiveness and inability to control his forces. Older navalists will be warmed by the continual reference by name to individual ships, especially those of the old battleships of the pre-war battle line.

No matter how many histories of the Western Pacific campaigns one has read, this one should not be missed. Hornfischer has written with insight and understanding that makes the campaigns at sea and ashore real, the choices on ending the war stark and the decision to use the atomic bomb more merciful than continued sacrifice not only of American but Japanese civilian lives.

Rear Admiral Holland once served as Vice President of the Naval Historical Foundation and is Editor-in-Chief of The Navy.