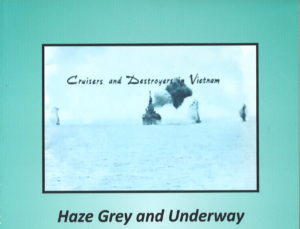 Captain Kaye provides an excellent account on his service in the U.S. Navy during the Vietnam War in the first volume of his memoir. He states that the reason he wrote this self-published book is that almost all of the books and articles about the U.S. Navy’s presence in the Vietnam War focus on naval aviation. However, the author contends that the naval air war was only made possible by the direct and indirect support of a variety of non-aviation combat and non-combat ships, the “small boys.” Kaye notes with sadness that the U.S. Navy cannot agree on which small boys saw service in the Vietnam War, but can provide detail accounts of the employment of its carriers and attached air units.

The author mixes within his autobiographical account of his Vietnam-era service official documents that amplify his story.  Included within both books are some excellent photos that enhance and bring to life the story. The heart of the book concerns the author’s service on board two ships, as Salvage Office on USS Lipan (ATF 85) and as Weapons Officer and temporary XO on USS Richard D. Anderson (DD 786).

Kaye entered the U.S. Navy via Officer Candidate School in Newport, Rhode Island. Due to a shortage of officers onboard Lipan he qualified as OOD during his first bridge watch. Before reporting on board Anderson, the author received training to be the ship’s Operation Officer, but with no background in gunnery, he was instead assigned to be the ship’s Weapon Officer. The book is full of accounts about how dysfunctional the Navy became during the 1960s as it sought to fight an unpopular war with obsolete ships, 5-inch ammunition shortages, and a lower deck workforce pool that reflected all the racial turmoil that American society was then undergoing. His tale of a sailor armed with a loaded rifle holding the Captain of Lipan hostage and the Navy’s response to this incident shows an institution that had lost its way. In contrast, his stories of Anderson on the gun line off of the coast of Vietnam tells the tale of American sailors giving their all to carry out the missions assigned to them. The author ends this book with an excellent list of YouTube videos showing U.S. Navy operations during the Vietnam War.

The author compiled twenty-nine articles on various aspects of the naval war fought off the coast of Vietnam in the second volume. These materials expand and elaborate on many of the events that the author covered in his autobiography. This volume contains an excellent discussion of the 5″/38 gun and its ammunition and ends with a chapter entitled “In Memoriam” in which is listed by ship and date all the sailors who died on board ship while off the coast of Vietnam, 397 officers and enlisted men.

This book is great. Hopefully, over the next few years, more surface sailors will follow in the footsteps of Captain Kaye and take the time to record in writing their experience in the U.S. Navy.