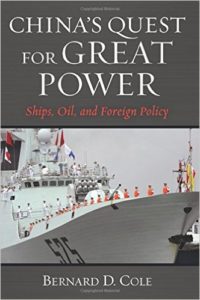 China’s Quest for Great Power, the latest from Bernard D. Cole, is a combination of a high degree of knowledge about Chinese military and political strategy with some implicit recommendations for how the United States can deal with China’s ambitions. As Dr. Cole is a well-regarded scholar in Chinese naval affairs this volume could only come from someone with a high degree of familiarity with the published statements and papers of the PRC, as well as a high degree of insight and understanding into Chinese history and China’s contemporary situation with regards to internal and external factors. As a somewhat heavy policy brief, the book manages to be deeply insightful without being heavy-handed in its advice and recommendations. Rather than pursuing the goal of dealing successfully with regards to China in a ham-handed fashion, the author decided to lay China’s cards on the table as skillfully as possible and include some reasonable guesses where evidence is lacking. This allows the reader to come to their own conclusions about what can and should be done about China’s behavior.

In terms of its contents, about ninety pages of this book are taken up with lengthy endnotes, an extensive bibliography, and a short index. Aside from this extensive supporting material, the slightly more than 200 pages of writing in this book is divided into an introduction, a conclusion, and seven chapters that deal with China’s maritime world, its maritime forces, maritime strategy, economy, desire for energy security, and foreign policy in the making and in action. The material is well-integrated and shows the connection between internal and external focus and the way that China’s internal political contract with citizens regarding the provision of guaranteed economic growth in exchange for a lack of democratic freedoms strongly influences China’s behavior. Cole is also particularly shrewd into the difficulties of containment when dealing with China as well as his insight into how China’s maladroit foreign policy has limited Chinese soft power and greatly hindered efforts by China to defuse tense situations with neighbors even as China has attempted to throw its weight around in pursuit of expansive borders and a disinclination to operate according to multipolar Westphalian diplomacy.

Ultimately, Cole’s insights are somewhat mixed when it comes to China and its efforts.  He recognizes the possibility but also the difficulty of encouraging China’s neighbors to unite together against China’s attempts to deal with them all in unequal bilateral treaties, comments on how China’s efforts against corruption have largely not succeeded and that China’s drive for constant economic growth has led to massive environmental problems.  Additionally, Cole notes that China is not seeking for a war at present and does not expect a massive foreign conflict in the next several decades, even as its own diplomatic efforts have proven less than fruitful thus far.  The author also notes that China’s attempt to be both a dominant continental and maritime power is an immensely rare feat that has been attempted without success by many nations and by one nation, namely the United States, only in the face of two World Wars. Cole appears to leave it to America’s own political and military leadership to decide how to handle a nation with clumsy diplomacy and colossal ambitions whose economic strength has so far not led to the cultural strength and respect that it wishes for around the world. Providing insight into what China is seeking to do and what constraints Chinese leaders are operating under ought to be of immense use to the policymakers who read this book and who will likely use it in order to buttress their own cases for action in East Asia and surrounding areas.

While the book’s extremely technical approach will likely keep this book from being appreciated by a wide reading audience, readers who want sound and knowledgeable insight about China’s behavior with regards to maritime strategy on both the military and merchant marine level, political and geopolitical constraints and ambitions, as well as China’s ongoing efforts at maintaining economic growth and seeking elusive energy security will find this book to be an excellent resource. Those looking for shrewd insight and measured conclusions based on excellent research will find this book to be well worth the effort it takes to read it and digest it, and may even seek to follow up on this book by reading some of the many sources cited by the author in his extensive bibliography.  For policymakers with briefs including Chinese civil and military affairs, this book is of immense help in providing the context necessary to make wise decisions in how to address the growth of China and its place in our contemporary world.

Albright resides in Portland, OR.