I originally wrote this in response to questions raised by a member of the Steamship Historical Society concerning the lack of use in marine gas turbines in the commercial shipping world. This fact is true, even though they have been the standard application all new surface combatant vessels since the 1970s.

My Navy career included two ship commands, multiple engineering tours, and eight years on various inspection boards, the last five of which were serving under RADM J.D. Bulkeley, who evacuated General MacArthur from the Philippines in 1942 on a PT Boat. Upon retirement from the U.S. Navy, I started a second career in the ship design industry where my specialty was in the development of concept designs for ship propulsion systems. I have done at least twenty of these, although not all have made it into the water. The new USCG Mackinaw, National Security Cutter, Missile Range Tracking Ship (T-AGM-R) built at Halter are all my concepts. I have additionally performed modernization studies on existing USCG Polar Icebreakers.

I have had plenty of exposure to marine gas turbines. I have been in regular contact with GE and Rolls Royce as well as some contact with Pratt & Whitney. I also did a marketing study for Rolls-Royce when they were introducing their MT-30 gas turbines into marine service. In the Navy, I served as either senior trial board member or senior engineer on about twenty-five gas turbine powered ships.

I have found a lot of misconceptions about gas turbines and just how they fit into the marine world. Many of these misconceptions come from the appearance of a gas turbine as it sits out in a pod on the wing of an airplane where it looks like a relatively straightforward installation. That is not the case in a marine installation. The gas turbine has a definite place in marine applications. But it is not the answer to everything. It depends a lot on what the customer’s requirements are. Most of this discussion is about the larger units that can be used to propel ocean-going ships.

The gas turbine is the happiest when it is flying at 20,000 feet or so in an airliner where there is an unlimited supply of clean, cold air. The work of compression which constitutes about 60% of the work of the cycle goes down dramatically, making the engine far more economical to operate. Additionally, there is also an unlimited supply of cooling air for hot engine parts. When you coop an engine up in a box, things are not so simple.

The engine needs lots and lots of air, approximately 250% of a steam or diesel installation of equivalent horsepower to start. It is necessary to design intake and exhaust systems with relatively straight runs so as to remain within the allowable pressure drops. The turbines are very intolerant of seawater entrainment. Therefore, an elaborate filtration system is required. The manufacturers have some very stringent limits on allowable seawater content of the intake air. Additionally, it is often necessary to provide a route for engine removal and installation through the intake duct. It is necessary to enclose the engine in a module with forced air cooling and fixed fire protection. The engine requires periodic washing with extra pure water to maintain its performance.

One problem that is inherent in the gas turbine cycle is that it is necessary to compress a lot more air needed for combustion. This necessity prevents overheating of components in the hot section of the engine where there is a high rate of combustion in a relatively small space. Only about 25% of the air goes into supporting the combustion process while the remaining 75% is required for cooling. For this reason, the gas turbine will never be as fuel efficient as a diesel engine. But the exhaust will be much cleaner. However, a lot of progress has been made in recent years by diesel manufacturers in curbing emissions. 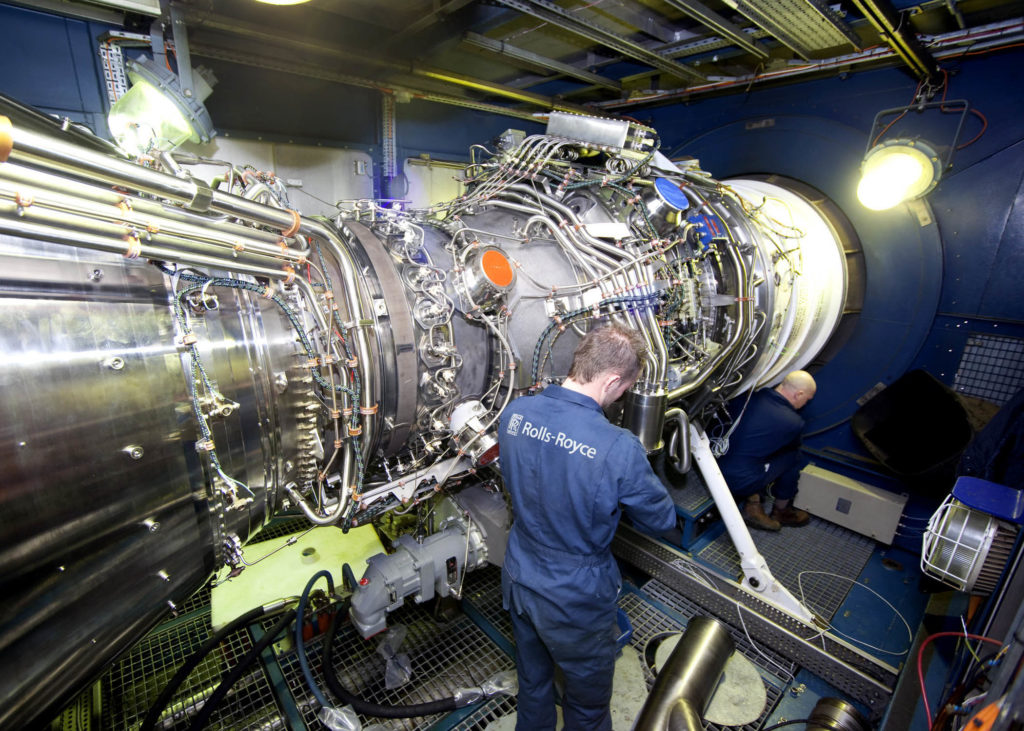 A big problem is the lack of a broad range of available models on the market. About the only credible models are the Rolls-Royce MT 30 (48,000 HP), GE LM 2500+ (35,000 HP), and LM 2500 (29,500 HP). All are US Naval ratings at an ambient air temperature of 100 Deg F with 4” H2O intake duct loss and 6” H2O exhaust duct loss. These are high powers. But unlike the case in an airliner application, bigger is not always better. Unless the powering requirement comes out to be some multiple of the above numbers, the gas turbine is not a good choice. De-rating is not usually an option because of the undesirable increase in specific fuel consumption at reduced powers, and most owners will not accept a single gas turbine installation. By comparison, diesel engines are available on the market that can cover virtually any power range and have relatively flat fuel consumption curves. The diesel engine vendor can easily cover a range of powers for a given series by varying the number of cylinders.

The reason for the lack of different gas turbine models on the market is the very high cost associated with conversion of an aircraft engine into a marine or industrial version. The manufacturers are very reluctant to undertake these conversions unless a certain market is identified due to high costs. The range of 10,000 to 20,000 HP is very poorly covered.

All cruise liner installations to date have utilized some type of co-generation system using a combined gas turbine and steam system with waste heat recovery or a combination of gas turbines and diesel engines.

This does not mean that there is any place for gas turbines in the marine market. They have the highest power to weight ratio of any prime mover, can be readily changed out, are easily adaptable to automation, and have low onboard maintenance and workforce requirements. For naval and coast guard applications, they also have the advantage of quick startup from a cold status. In a combined installation, such as on the National Security Cutter they are used as boost units whenever high speeds are required. Most cruising on this ship will be done on diesels. The first time that I went to sea on a gas turbine powered ship I never wanted to see a steam driven naval vessel again.

The best commercial marine application for large gas turbines has proven to be in the high-speed ferry market. Even there they have usually been used in combination with diesel engines.

The bottom line is “What are the requirements?” If power density and low space and weight are most important, go with a gas turbine. Go with diesel if fuel economy is the primary consideration and secondary concern is given to weight and space requirements.