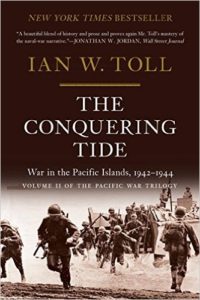 Ian Toll’s Conquering Tide is the middle piece of his Pacific War history, and it is a superb fit with the first volume, Pacific Crucible. Now available in paperback, Conquering Tide tells the story of the fight after the Battle of Midway in the air, on and under the water, and on specks of land. It was the struggle that rolled back the Japanese Empire and set the stage for the climactic events in the Inland Sea and the home islands.

As the book ends, victory was in sight after the Battle of the Philippine Sea, but it would come at a terrible price – for the Japanese and the Americans.

Toll’s work on the Pacific War has been compared favorably with Rick Atkinson’s Liberation Trilogy, his thorough examination of the American Army first in North Africa, then in Italy, and finally the push eastward from the Normandy beaches into Germany.

The trilogy is an excellent update of Samuel Eliot Morison’s epic 15-volume magisterial opus on the Navy in World War II. Toll encapsulates the title, Conquering Tide, in this one sentence late in the book:

The Americans had developed the capability to project overwhelming force into the distant frontiers of the western Pacific, and no tactical masterstroke or blunder could reverse the increasingly lopsided balance of power between the two combatants.

The image of Japanese aircraft having to be pulled by oxen to airfields miles away from production plants contrasted with the non-stop output of American aviation assembly lines rolling out to close by runways captures in small detail “the capability to project overwhelming force” that Toll has set up.

Similarly, with a sailor’s description of seeing thirteen American aircraft carriers in a single day in the Gilberts when at one point a short time before there was but a single flattop in the Pacific achieves the same effect of graphically demonstrating a projection of overwhelming force.

But the impending fight to bring this war in the Pacific to an end looms as a bitter, bloody, “no surrender” battle by the Japanese military and civilians on island after island. Toll chronicles the fall from power of Hideki Tojo and notes his replacement Kuniaki Koiso, a retired general and Tokyo’s proconsul ruling Korea, “dutifully mouthed the same bellicose avowals and victory forecasts” of the old regime. There always was to be “a great offensive in the near future to crush Britain and America” he promised and propagandists repeated. All the time, casualties mounted, the empire shrank, and privation on the home islands spread.

While not having Morison’s luxury of 15 volumes to expand on broad themes in critical detail, Toll does not give the Marines short shrift in his account, nor does he short change the contribution of the submarine force [once he addressed the longstanding and ignored problems with its torpedoes].

On the American side, Toll’s narrative deftly moves between the towering figures – King, Nimitz, Halsey, Holland Smith, and deck-plate sailors and Marines who “do not know how many of the Japanese civilians [italics in text] will actively fight us.” He weaves the Japanese narrative in a similarly efficient and coherent way.

Conquering Tide is not a Navy and Marine battle action history. It is a compelling account from the biggest of pictures of the “Europe first” strategy to the tiniest of pixels to help readers born years and decades after these events understand what happened, why it occurred, and ultimately what it all meant at the time to the Americans and Japanese.

This reviewer was particularly struck by Toll’s description of the Japanese fight to the bitter end on Saipan and the decision by thousands of civilians to take their lives rather than surrender.

“Despite the bitterness of defeat, we pledge ‘Seven lives to repay our country’” was part of Yoshitsugu Saito’s last instruction to his battered forces. “About 3,000 Japanese troops answered the call” to report to a staging point and charged down a narrow-gauge railway into the Americans in a banzai charge shortly before 5 a.m. Those who had rifles fixed bayonets, those without fixed knives or bayonets on long poles. At the rear but pressing forward was “a pathetic cavalcade of sick and wounded men, bleeding and bandaged, some hobbling along on crutches, many with no weapons at all.”

The stampede thinned out as soldiers and Marines “fought at close quarters … until infantry and tank were rushed in to join a punishing counterattack.” The fight ended after four hours. Not far away, Japanese women and children were leaping from cliffs into the sea to their deaths rather than risk capture by the Americans.

Summing up, Toll noted, “Capture of the Marianas and the accompanying ruin of Japanese carrier airpower were final and irreversible blows to the hopes of the Japanese imperial project.”