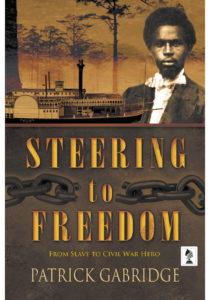 Robert Smalls was a black slave at the beginning of the long blockade and siege of Charleston during the Civil War. He was also a skilled waterman and harbor pilot, as well as a man of remarkable charisma and intelligence, and on May 13, 1862, he escaped with his ship, the small steamer Planter and seven other slave members of her crew, and delivered her to the Union blockading squadron outside the harbor. Afterward, he spoke personally to Stanton and Lincoln to urge the enlistment of black soldiers in the Union Army and continued to serve the Navy at Charleston, mostly as either pilot or captain of the Planter. He was present at 17 battles, including as pilot of the ironclad Keokuk, sunk due to her flawed design after Adm. Dupont’s bombardment of Ft. Sumter on April 17, 1863. After the war he embarked on an active business and political career, serving in the South Carolina House and Senate, and the US House of Representatives, until the disenfranchisement of blacks in South Carolina. Then and later he distinguished himself as a champion of many civil rights causes. He is a genuine hero with a fascinating story that deserves to be better known.

Steering to Freedom tells Smalls’ story from the escape of the Planter to the end of the Civil War, in the form of a clear and straightforward novel. Based on the experience of a participant in the siege of Charleston, it should be of great interest to students of the Civil War and nineteenth-century naval warfare. However, there are problems in these areas.

First, the Planter. The book’s cover shows a stereotypical low freeboard Mississippi River sidewheeler, down to the decorative gingerbread. This is certainly incorrect; Silverstone’s Warships of the Civil War Navies shows her listed (in the Union Navy) as a “Medium Side-Wheel Combatant – 4th Rate”. No photo of her is given, but photos of other ships in this group show them as variously masted and rigged – or not, with superstructures or not, but all with ship shape bows and at least moderate freeboard necessary for service on the Atlantic coast. At 313 tons and 147 feet, with two cannons, the Planter appears typical of this group. Silverstone does not provide her complement, but the crews he lists for her group are mostly around 40. Throughout the novel Smalls, and the six other former slaves who escaped are portrayed as her entire crew, a serious distortion in the author’s picture of life and work aboard a ship – hardly enough men to stoke her boilers, load her cargoes, and keep her maintained. Also, at one point the author describes “bullets pinging off her armor”; she had no such thing.

Much of the novel is convincing, but sometimes the author’s background research seems to run thin. Things are not helped by the suspicion that he introduces some gratuitous inventions. The novel has Planter under fire from Ft. Sumter during her escape, but Burton’s The Siege of Charleston 1861-1865 describes her as bluffing her way past with complete success. Or, the first scene of the book describes the accidental explosion of a “torpedo” (“mine” today) laid by a boat crewed by slaves. Afterward, “a detached brown hand twitched on the deck” and “Planter’s” captain pitches it overboard – more than a bit stagey. But were Charleston’s torpedoes laid by slaves, and did they explode accidentally while being laid? This writer wonders, and would like to know the answers.

There are other questions with the historical background. Smalls is depicted as giving money to purchase his wife and children from their owner. But could slaves own slaves? Did a slave have any right to see such a contract honored? Was this a common custom, something unique, or an invention by the author? The novel has the black characters speaking a rather stereotypical black English, but wouldn’t Carolina low-country blacks have spoken the Gullah dialect, which rather resembles the speech of the British Caribbean? I don’t know the answers to these questions, and I’d like to, but as fiction without notes or bibliography, it’s hard to distinguish convincing facts from dubious inventions. On the other hand, the description of the bombardment of Ft. Sumter and the loss of the Keokuk appear thoroughly accurate, detailed, and most interesting. However, the author might have benefitted from reading Alvah Hunter’s vivid personal account of this battle in his memoir A Year on a Monitor, from aboard the Nahant.

Briefly, it seems to this writer that this book is still unfinished; a lot of work has plainly gone into its research and writing, but more is needed, especially into the historical background. Indeed, one can’t help thinking the writer would have been wiser to have chosen to write a non-fiction biography, verifying all his facts, telling the full story of Robert Smalls’ life and achievements, and doing justice to the real man.

Largess is the author of USS Albacore; Forerunner of the Future, and articles on the USS Triton, SS United States, the origin of the towed sonar array, and the history of Lighter-Than-Air.