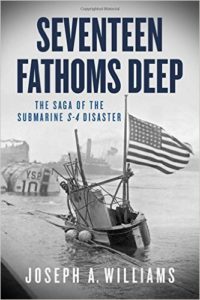 As followers of naval history, most of us have, at least, a small amount of knowledge regarding submarine disasters that have occurred since just after World War I, when submarines became major weapons thanks to the German use of U-Boats. However, many of us know of only one or two of the most famous submarine sinking and rescue efforts, such as the USS Squalus (SS 192) in May 1939. Author Joseph Williams was doing some other research at the SUNY Maritime College in New York, when he came across several boxes of memorabilia and records of the sinking of the USS S-4 on December 17, 1927, within sight of Provincetown, Massachusetts. Lt. Cdr. John Baylis, USCG, donated the boxes to the college.  John Baylis was the former commander of U.S. Navy destroyer Paulding, which the Navy had transferred to the Coast Guard as a “Rum Chaser” to catch fast boats trying to bring illegal liquor into the USA during prohibition.

On that cold December day, unknown to Baylis, S-4 was doing trials off Wood End. During those trials, she was coming to the surface when the bow of the Paulding sliced into her hull at the battery room. The rest of the story revolves around the six crew members of S-4 who survived the collision in the torpedo room, the abysmal weather that raged topside, and the frantic attempt to save the survivors. Unfortunately, the severity of the weather prevented the brave divers from being able to rescue any of the six survivors in the torpedo room. Despite many efforts to feed an air-line to the torpedo room, once their air ran out, they succumbed. Most of the well-known salvage divers and members of the early submarine community were present, including Capt.  Ernest J. King who would later lead the Navy as a Fleet Admiral during World War II (and the Naval Historical Foundation) and Charles “Swede” Momsen (who was actually of Danish descent), who became a household name when much of the Squalus crew was saved in 1939. Diver Fred Michels nearly drowned when he became entangled in the wreckage of S-4, and only the valiant efforts of diver Thomas Eadie in appalling conditions enabled Michels to survive. In the end, the rescue would revert to a salvage operation as none of the crew of forty aboard the S4 survived the sinking in 102 feet of water.

The heavy weather eventually subsided, and the tedious job of salvaging S-4 began. Once she was finally raised, using pontoons, and was slowly drawn to Boston where she was drydocked at the Charlestown Navy Yard, the home of USS Constitution. The bodies of the entire crew were located and treated with great dignity as they were returned to family members or sent to Washington for burial at Arlington National Cemetery. Once they removed the crew, the S-4 was repaired and re-christened SS-109 in late 1928. She made her way to Key West, Florida, where she was used as a test bed for submarine rescue technology. She returned in that role to New London, and eventually sailed through the Panama Canal and on to Pearl Harbor, where she was decommissioned in 1936 and eventually scrapped.

Mr. Williams has written a very tight and emotional account of the rescue and salvage attempts on the S-4. I found this book difficult to put down once I started to read it. He also wrote of the controversy surrounding the weather delays that made it impossible for any of the crewmen in the torpedo room to survive. For those of you who are unfamiliar with submarine safety/rescue/salvage, this book is an excellent way to learn about the “silent service” and some of its hazards in those early days. I highly recommend Seventeen Fathoms Deep to anyone interested in Navy history not necessarily connected to war or battles.

Elkin is a former Northern New Jersey Navy League Council president who has retired to Clearwater where he buys and sells antique cars.