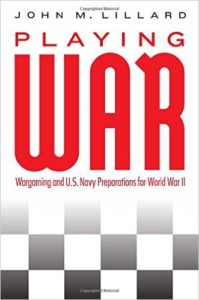 By John M. Lillard, Potomac Books, An Imprint of the University of Nebraska Press, (2016)

John M. Lillard, Ph.D., the author of Playing War: Wargaming and U.S. Navy Preparations for World War II has worked in the field of wargaming, modeling, and simulation since 1995. He served as a naval officer for 15 years and has also worked as an operations analyst. His previous work has appeared in the Naval Institute’s Proceedings, and Rotor and Wing. Given Lillard’s experience and technical background, he can certainly be considered an expert on the topic of wargaming. This book is an inquiry into the Naval War College’s wargaming method and how it was used to help the U.S. Navy educate its officers in decision making, evaluate strategic and tactical problems, learn, incorporate innovation, and eventually transform the navy into the organization that defeated the Imperial Japanese Navy in World War II. Lillard does not attempt to convince the reader that wargaming accomplished all of that on its own. He does, however, place his work alongside existing scholarship that discussed what was transpiring in the operational fleet and fleet exercises; the history of the War College itself; the development of war plans; and the General Board and Bureaus that designed and acquired the navy’s ships, aircraft, and equipment. By doing so with Playing War, Lillard fills a void in the historiography of the interwar period.

A solid introduction describes the book’s premise and what he hopes to contribute to the history of the interwar period. Next, Lillard lays a foundation with a chapter discussing the players: the students, faculty, game directors, and college leadership. This section shows the various influence officers had on war games and provides some insight on priorities. The subsequent chapter explains the game process, the specialized rooms for conducting the games and how the scenarios evolved. Some games were tactical problems involving battle over a short time span and others were aimed at large operations encompassing large geographic areas played out over weeks. Lillard devotes three chronological chapters to show the development of the games. An early period, 1919-1927 shows the nascent gaming process. A middle period, 1928-1934 explores the increasing complexity of the games and demonstrates tactical developments. The late period, 1935-1941, aptly shows the increasing complexity resulting in helping to define tactics, identify needed capabilities, and testing out variations in war plans. Lillard put together a solid conclusion chapter that ties his findings together and included several robust appendices that support his conclusions with tabulated data. Lillard included only a few pictures carefully selected to enhance the narrative and illustrate a point that he was making. Lillard does not waste words or fill pages with incidental information. He gets right to the point and supports it with sufficient evidence. The result is a book that is trim and efficient.

What Playing War made clear was the point that while the games afforded officers the opportunity to practice necessary skills in formulating estimates, writing orders, and developing plans, the ultimate purpose of the wargames was to teach the students decision making. Even though the games had that primary focus, Lillard convincingly shows that repeated iterations of the scenarios also allowed the U.S. Navy to experiment with ideas. For example, numerous tactical problems helped officers figure out how to effectively use aviation; the cult of the battleship was gone well before the Japanese bombed Pearl Harbor. They also showed that there was a need to defend against submarine attacks and that a specialized ship would best fill that role—hence the Navy developed the destroyer escort. They tried out various avenues of approach out as the Navy sought solutions for fighting a battle of attrition across the Pacific Ocean. They concluded that without gaining local air superiority, no route across the ocean would succeed. This fact reinforced the need for aircraft carriers and drove the development of all types of aircraft to fill reconnaissance, defense, and attack roles.

Playing War is a well-written, readable book that fills the niche Lillard intended admirably. Having said that, because the niche this book fills is specialized, the average popular history reader (even if an aficionado of all things World War II) will probably not be drawn to this particular work. On the other hand, I highly recommend that military professionals read this book. As a faculty member at the U.S. Army Command and Staff College, I found his insights invaluable and believe that having read his book I will be a better educator.

Dr. Pattee, a retired U.S. Navy submarine officer, is a member of the faculty at the U.S. Army Command and General Staff College.