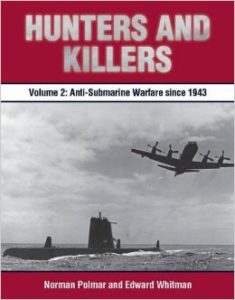 Hunters and Killers, Volume 2: Anti-Submarine Warfare from 1943 is the second volume of a sweeping survey of submarine and antisubmarine warfare written by two very well-informed authors. During his forty-year career as a Navy civilian employee, Dr. Edward C. Whitman served in numerous technical capacities, including as Deputy Assistant Secretary of the Navy (RD&A) for C4I and Space Programs and as Technical Director, Oceanographer of the Navy. Whitman followed his retirement from the Navy in 1998 by joining the Center for Security Strategies and Operations (CSSO), a national security studies and analysis organization in Arlington, VA, as a naval science advisor. For five years, he also served as senior editor—and frequent contributor—to Undersea Warfare, the official magazine of the U.S. submarine force.

His many articles for Undersea Warfare cover the spectrum of topics, technical and historical. The range of Whitman’s knowledge is shown in two summer 2002 articles, “Unmanned Underwater Vehicles: Beneath the Wave of the Future,” and “Submarines to Corregidor.” Rear Adm. Richard Terpstra, former commander, Submarine Group Ten, called the first of these “an excellent primer” on unmanned undersea vehicles (UUVs), while the second is a historical account of the efforts of the submarines of the U.S. Asiatic Fleet to sustain and later to evacuate as many of the defenders of the Philippines as possible. Altogether, his various publications provide a good basis for his contributions to Hunters and Killers.

Co-author Norman Polmar needs little introduction to students of strategic studies. An author of many articles on national defense topics and author or co-author of more than fifty books, his analytical skills have informed senior uniformed and civilian defense officials and elected officeholders for many years. He also consults widely with defense industry firms. His studies of naval subjects are particularly thorough and insightful, though his has also written extensively on aviation topics.

His Cold War Submarines: The Design and Construction of U.S. and Soviet Submarines (2004 with Kenneth J. Moore) and his two reference works, the Naval Institute Guide to the Ships and Aircraft of the U.S. Fleet and Guide to the Soviet Navy, amply demonstrate his familiarity with the subject of Hunters and Killers. Polmar is also a regular contributor and columnist for the U.S. Naval Institute’s Proceedings and Naval History magazines. Between them, these two authors draw on a wealth of experience with naval warfare for Hunters and Killers that is immediately evident to the reader.

The second volume of Hunters and Killers picks up in late spring 1943 with the virtual suspension by Grossadmiral Karl Dönitz of the German U-boat campaign in the North Atlantic. This period of German reassessment was echoed on the Allied side at the Trident Conference in Washington, D.C., where the Americans and British discussed their response to heavy shipping losses. From this beginning in medias res, the authors continue in mostly chronological order to the post-Cold War era, wrapping up with an assessment of the state of antisubmarine warfare (ASW) in the twenty-first century.

The book divides into thirteen chapters. The first four, dealing with World War II, are divided between telling the balance of the story of the campaign against the Nazi U-boat threat and the history of ASW in the Pacific theater. With the exception of the last chapter, the rest of the book deals primarily with ASW during the Cold War confrontation between the Soviet and NATO navies. Navies on both sides of the Iron Curtain looked at the captured technology of their recent German enemy and, to the extent that they could in the postwar drawdown, incorporated useful aspects along with other developments in submarine development.

Several of these latter chapters take a more thematic approach to selected aspects of the Cold War confrontation. For example chapters eight and nine explore the new threat about 1960 of the ballistic missile carrying submarine. Chapter eight examines strategic ASW from the Soviet perspective, and chapter nine looks at the same subject from the U.S. perspective. Chapter ten considers the potential use of nuclear weapons at sea to address the ASW threat. Both U.S. and Soviet naval planners prepared for the possibility of nuclear attack, though as the authors note, “only the Soviets appear to have developed comprehensive concepts of operations for deploying them.” (176)

Chapter eleven turns to the question, “Does ASW Still Work?” Obviously, the Cold War never descended into a shooting war between the Great Powers, so, to suggest an answer to the question, the authors employ two case studies for evidence on how a war might have played out. The first episode they examine is the Cuban missile crisis where U.S. ASW forces confronted Soviet submarines in the Caribbean. As they note, “The confrontation of these submarines with massive U.S. anti-submarine forces was later to reveal both the capabilities and the limitations of U.S. ASW forces and of Soviet submarines.” (177) This episode, Polmar and Whitman note, illustrated that “there was a very real possibility of an accidental engagement that could have led to a nuclear exchange” due to the exhaustion of sailors on both sides in what was seen as a Soviet naval defeat.

The second case study explores the experience of the Royal Navy during the Falklands War of 1982. The Argentine Navy presented the RN with a serious ASW problem, in particular, the two Argentinian submarines that were modern German-built Type 209 diesel-electric submarines. The British also worried about the ability of their own submarines to operate in the face of the Argentine ASW aircraft. While this latter threat did not develop, the single operational Type 209, San Luis, carried out multiple attacks that, while unsuccessful, forced the British to respond with intensive efforts to deal with the threat. This had the consequence of forcing the British to expend “ASW weapons at a much higher rate” than predicted, a circumstance that eventually might have left the RN at the distant end of a long supply line in dire straits. (190)

The authors devote the final chapters to the question of ASW in retreat and the new world of ASW in the twenty-first century. At the end of the Cold War, even with the prolonged disappearance of the Russian Navy at sea and the significant reductions of the NATO navies, ASW research and development has continued, though at a constrained pace. New submarines are built, new ASW platforms are designed, and organizations like DARPA continue to innovate with new surveillance systems, unmanned vehicles, and with new non-acoustic detection methods. The authors identify a paradigm shift in post-Cold War ASW. In the last years of the Cold War, the threat was the advanced Soviet deep-water threat to be countered by the NATO alliance over a wide area with many available sensors and platforms. In the modern era, the threat is primarily the third-world diesel and AIP submarines in noisy littoral settings often without only a limited number of assets to help. Significantly, as the Russian threat seems to be reviving, it is joined by another capable potential adversary in the Chinese Navy.

Polmar and Whitman conclude soberly by pointing out that, “Overall, in the early 21st Century submarine technologies and capabilities are developing at a significantly faster rate than are U.S.-NATO anti-submarine capabilities.” They quote Vice Adm. Albert Konetzni, “The uncontested undersea superiority experienced during recent conflicts is not likely to be repeated against determined and capable adversaries.” Unfortunately for those considering the ASW problem from the American or NATO perspective, the “large and expensive force structure” needed for a successful ASW effort is no longer there. (212)

Hunters and Killers, Volume 2, is an interesting history even if not accompanied by the first volume because, by the end of the book, the reader is made aware of the continuing relevance and difficulty of the ASW problem. This book should be read by serving naval officers as a reminder of the threat that once was and that might be again.

Grant teachers and conducts oral history at The Citadel.