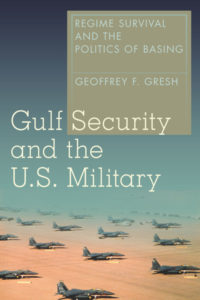 To aid the understanding of the security of the Gulf region, Geoffrey F. Gresh published Gulf Security and the U.S. Military: Regime Survival and the Politics of Basing. In this book, he explores the reasons that contribute to the giving or withdraw of permissions from countries in the Gulf region such as Saudi Arabia, Bahrain, and Oman for the United States to establish, maintain and operate military bases on their sovereign territory. Unlike classical realist scholars such as Kenneth Waltz, who believes security concerns are merely external factor; Gresh focuses not only on external but also internal security concerns that threaten regimes in the region. He argued that when regimes face external threats from foreign invasion greater than the internal threats posed by their political enemy, regimes will welcome American military bases. However, when the regime is facing challenges internally that threaten and undermine the legitimacy of the ruling government, regimes are unlikely to welcome American base presence on their territory.

Four cases are examined using a wealth of primary sources in detail in Gresh’s book: Saudi Arabia (after World War II), Bahrain, Oman, and Saudi Arabia (during the 1980s and 90s). These case studies demonstrate the pattern of behavior of regimes in the Gulf region. His analysis of internal and external dynamics of security threats enables him to explain the change of attitude towards the United States; which helps readers to understand why in some cases regime would expel US bases even when the external threat is still present.

As well as helping readers understand the behaviors of regimes towards the US; more importantly, his multi-dynamic understanding of security threats that faces the Gulf region regimes could provide US policymakers wider options of security aid to those countries that better attend their need for security, both internally and externally. As he discussed in the book, this can come not only in the form of establishment of bases but also regarding military aid.

As well as to the policymakers, this book also gives useful lessons to the American military personnel operating on military bases in those regions. There are examples of US adjustments of the extent of their presence. Gresh argued that when regimes faced more threats from its internal enemies, they requested the US military base to have a lower profile to reduce the pressure on the government due to the popular anti-American sentiments. For instances, in the case of Oman; when internal pressure was threatening the ruling family, the government demanded a low profile US military presence. On the other hand, in the case of Saudi Arabia shortly before the Gulf War, the regime required US higher US military guarantee of security. By understanding the dynamics of internal and external security needs of the regime, commanders in charge may better adjust the extent of their presence accordingly.

However, there are some limitations to the case studies used in the book, most notably a lack of examination of the security situation both internally and externally before the involvement of the United States. For example, in the case of Oman, the author did not explain the security dynamic of either internal pressure or external pressure. Gresh only explains that the withdrawal of the British troops under Prime Minister Heath created a security void in the region, which he argued that it needed to be filled by the United States. However, by failing to explain the role of the British played in influencing their security dynamic both internally and externally; the author fails to demonstrate the extent of the ‘void’ created. This fact could be a future research interest for scholars to compare and contrast the experience of establishing military bases in the region.

Overall, the analysis provided in the book is extremely valuable to US policy makers and officers in charge of American bases in those regions, as they will find important insights and inspirations from Gresh’s book. The lessons from this book can also be of great interest to policy advisors concerned with how the United States today can help countries in the Gulf regions to enhance their national security facing the severe threats from the rise of Islamic State (ISIS) and to reduce the risk of increasing internal security threats for those countries.

Junyuan Rao is a student at St. Andrews College in Scotland and served as an intern with the NHF during the Summer of 2016.