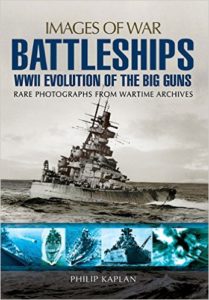 Devotees of big-gun battleships apparently cannot get their fill.  In Battleships: WWII Evolution of the Big Guns, prolific author Philip Kaplan has completed his third volume in the “Images of War” series about these warships.  In 2004, Kaplan wrote yet another book about battleships for the Naval Institute Press.  Altogether, Kaplan has written over thirty volumes about military topics ranging from the war at sea, in the air, and submarine warfare.

In this short volume (144 pages), Kaplan had to be selective about which nations and which battleships he wrote about since there is not space here for a comprehensive detailing of all the world’s dreadnoughts.  Kaplan focuses on the American, Japanese, German and Royal Navies.  At that, there is insufficient space to deal with all of these nations’ battleships, even those for only World War II, so Kaplan sets his sights on specific capital ships.

For the United States Navy, the focus is on the Iowa-class, though their evolution through the North Carolina and South Dakota-classes is traced.  Kaplan describes the Iowas’ primary assignments, operational histories, and roles in World War II, Korea, Vietnam, and the First Persian Gulf War in 1991. He suggests the New Jersey could have provided much more support for American and South Vietnamese forces if she had remained on station there for more than a single year.

The emphasis for the Imperial Japanese Navy is on the Yamato-class, though there is an informative section about the earlier Kongo class’ major conversions from battlecruisers to battleships. Kaplan asserts the Iowa-class was designed and deployed, in part, to engage these fast Japanese warships.

The two battleships showcased for the Royal Navy are the good and faithful Warspite, which served in both world wars, and the last British battleship, the Vanguard.  The latter incorporated updates to correct the deficiencies discovered in the King George V-class.

Kaplan avoids a discussion of the famous German battleship Bismarck.  Instead, he spotlights her sister ship, Tirpitz, and how she came to epitomize the fleet-in-being theory. The deployments of the Scharnhorst and Gneisenau, which the Allies categorized as battlecruisers, but the Kriegsmarine rated as battleships, are also scrutinized.

One of the positive aspects of this book is Kaplan’s interspersing personal narratives by officers and sailors who served aboard when these battleships were in service.  One can read observations of the future Admiral of the Fleet Sir Henry Leach when he was a young Sub-Lieutenant on board the Duke of York at the Battle of the North Cape in December 1943.  Enlisted man Ted Pederson shares two stories about the Missouri’s skipper and executive officer during his time on the ship from 1948-1950.  Enlisted men seldom got that close and personal with their skippers, and stories such as these enliven the book.

Despite the limited space, the author does an excellent job providing insight into the design and building of particular battleship classes. In 1937, the Chief of Naval Operations refused to authorize two additional North Carolina-class battleships because they were under armored against 16-inch shells, as they were originally designed to carry 14-inch barrels. This, in turn, led to improvements in the “highly successful” (p. 65) South Dakota-class. The four South Dakota battleships’ design paved the way for the fast battleships of the Iowa-class. There is a good description of the benefits of oil-powered vs. coal-burning battleships (p. 88) and an analysis of the Japanese naval leaders’ decision to build the Yamato-class (p. 104).

Though he devotes a good deal of space to battleships’ service in World War II, Kaplan roams from the Royal Navy Warspite’s deployment at Jutland during World War I, to her parting her towline in 1947 on her way to the breakers. He describes the last British battleship, Vanguard, the decisions that went into her design, and her scrapping in 1960.  Like the battleships he writes about, Kaplan packs a good deal of punch into a short volume.

The pictures of battleships that grace this book are one of its chief strengths. The “picture gallery” (pp. 126-144) is especially noteworthy. It is, after all, part of the “Images of War” series and the subtitle correctly claims there are rare photographs from wartime archives.

For such a prolific author of military subjects, and battleships, in particular, there are a surprising number of errors. Kaplan wrote a bomb hit “down the funnel of Arizona caused her forward ammunition magazines to explode” (p. 45). It is a myth that will not die. He asserts the Arizona capsized, which will come as a surprise to the numerous visitors to the memorial. Though some may consider it a technicality, the author lists the Utah (formerly BB 31) as one of the eight American battleships at Pearl Harbor on 7 December 1941. Utah’s classification changed to AG-16 in 1931 and recommissioned as a fleet target ship in 1932.  She was not serving as a battleship on the day of infamy. Kaplan wrote the first Missouri, a steam-powered, wooden side-wheeled frigate, was completed in 1942 and the second, a Confederate iron-clad sloop, was launched in 1963 (p. 34).  These and a few other editorial errors are minor, though unnecessary, distractions.

The author does not provide a bibliography, index, or footnotes, so the reader cannot check the author’s sources.  There is, however, an extensive picture credits page.

The novice reader would do well to start with a more far-ranging and comprehensive general primer about battleships. This volume is better directed at more established battleship buffs and devotees. Read, in combination with Kaplan’s two other “Images of War” books about capital ships, this volume provides new information, insights, and images that even some well- read “experts” might find enlightening.