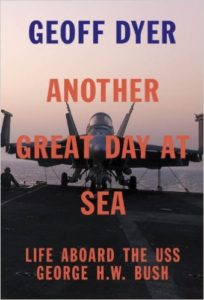 Whether or not a reader appreciates this book will greatly depend on their mindset. If someone comes to this book looking for someone who is serious about the United States Navy, has lots of respect for the military or the religious and political world views that are commonplace in the military, that person is likely to be deeply disappointed. On the other hand, if the reader comes in looking for someone who is a “fish out of the water,” out of their depth, but can nonetheless write gorgeous prose in a humorous fashion, then this book is a gem. It reads like a road comedy that happens to take place on a ship. As a privileged British journalist guest on an American aircraft carrier, Dyer does not capture life on a ship for the people who would be there for months at a time. He does, however, write a suitably amusing book for individuals who like comical books on the military. Clearly, the military leadership that approved of his two-week stay had a sense of humor and knew what they were getting; not all of the readers of this book are likely to be as fortunate.

The chronologically divided chapters of this book take a look at Dyer as he attempts, unsuccessfully, to understand life as a sailor in an aircraft carrier. In many ways, the author’s experience is a privileged one. He has carte blanche to talk to various people as long as he is not interfering with their duties. He manages to fly in a helicopter, visit the flight deck, talk to various chaplains and psychologists on the ship, dine with the captain, attempt to exercise in the gym, complain about the absence of alcohol, find a pleasant place to view the sea that few people go to, and argue endlessly about the food. One may determine an author’s preoccupations by how often they mention certain matters. Dyer is continually talking about food—complaining about not gaining weight, kvetching about the prepared nature of food, talking about his stringy bowel movements, and glorying in eating the delicious leftovers from the captain’s table. The author makes his love of good food plain, and his continual harping on the subject and implicitly fierce criticism of the shipboard cuisine is a bit tiresome to readers who are not quite as snobby as the author about food. Except for the food of the unfortunate but skilled chef at the captain’s mess, the author has little good to say about naval grub and does not appear to particularly enjoy the workaholic tendencies of life on a ship and the lack of good entertainment and alcohol options available.

If the reader can overlook the author’s immensely critical attitude, he does provide some important insights about naval life. Not all of these insights are likely to be pleasant to the reader. These include the frequency of naval recruiters who fail to live up to their end of promises made to recruits including such matters as college debt repayment, or the way that life on a ship is most comfortable for short people with a high tolerance for noise and grease. These insights, intriguing as they may be, are not likely to appeal to those whose interests in the military are more operational in nature.

There is likely to be lots of interest among readers in life on an aircraft carrier, an interest that probably inspired this book’s writing in the first place. This book is for a particular audience, sophisticated urban audiences unfamiliar with the military, unlikely to volunteer for service in the armed forces, and in search of levity about the military. For such audiences, the sparkling wit and peccadillos of the author are likely to be seen as endearing and humorous, and indeed as signs of insight and wisdom. Still, less writing about the fruitless search for gourmet food and drink and more writing about the service of enlisted men and women would have made this a far more worthwhile account. It should nonetheless provide a couple of hours of entertaining and lighthearted reading for those so inclined.

Albright is a native of Portland, OR.