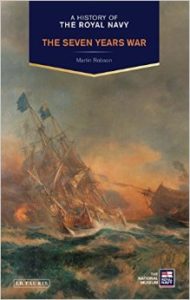 Martin Robson, a lecturer in Strategic Studies at the University of Exeter, has written a fine book that summarizes the Royal Navy’s role in the Seven Years War with balanced treatment of the British government’s strategic framework for the conduct of the war and the tactical aspects of naval engagements.  In less than 200 pages of narrative, Robson thoroughly explains the complex scenarios where Royal Navy ships and squadrons figured prominently, which contributed to a decisive victory that took control of Canada, secured the American colonies from potential threats from French and Native American alliances on the expanding frontier, and took French territories in the East and West Indies, Africa and India.

This brief but admirably substantive study is part of an intended 15-volume history of the Royal Navy consisting of three broad chronologies, and several thematic titles focused on important aspects of the RN’s extraordinary history.

The Seven Years War (known in the U.S. as the French and Indian War) was global in scope, arguably the first worldwide war. Hostilities began in 1754, but the central conflict between European coalitions headed by Great Britain and France spanned 1756 to 1763. Fought in Europe, Asia, North and South America, the Caribbean, Africa, and the Philippines, the war involved every major European power at the time except the Ottoman Empire. The American colonies and Canada, however, formed the war’s primary theater because control of Britain’s and France’s territories there was vital to both nations’ economies and political power.

The war’s global character created a clear requirement for the principal belligerents to utilize strong naval forces. Britain’s maritime heritage focused on commerce and trade, ensured that she had the inside track in extending already formidable naval capabilities.

In fact, the Seven Years War built the foundation for Britain’s rise to naval dominance a half-century later during the Napoleonic Wars. The Seven Years War would help to transform the Royal Navy into the principle instrument that established Pax Britannica, the mostly peaceful century of British hegemony in world affairs that brought the Empire to its apex and lasted from Waterloo until World War I.

Thanks to the Navy, Britain’s triumph was extensive, marred only by debts that financed the war, debts that quickly led to political instability in America as colonists rebelled against repeated, onerous levies that produced the familiar cry, “No taxation without representation.”

The volume’s sensible structure treats the Navy’s war activities chronologically and geographically, focusing on naval operations, missions and occasional engagements in the war’s widespread theaters.  The Navy’s extensive responsibilities were a reflection of Britain’s complicated war strategies, conducted mostly by the government of William Pitt, the popular Whig leader of the House of Commons who advocated attacking France and its colonial interests around the world.

Things went badly at first. That sentiment was especially the case with the defeat of the Braddock expedition in the Ohio River Valley and the loss of the Mediterranean island Minorca, seat of a British garrison. That led to the execution of Admiral John Byng (wryly noted in Voltaire’s novel Candide as an act pour encourager les autres), whose squadron conducted an inconclusive engagement against a French fleet and failed to prevent the island’s capture.

The Navy would restore its reputation quickly, and on nearly every front, developing superior tactics in naval engagements but also innovative amphibious warfare doctrines that produced effective operational cooperation and coordination with the British Army. Britain had subsidized Austria and the Electorate of Hanover (the home of British monarch George II) in their war against Prussia and contributed British land forces in their defense to prevent a French invasion. The Royal Navy supported these efforts with amphibious operations that prevented larger French armies from concentrating and defeating Hanover, giving the French a significant trading chit, a clear advantage in peace negotiations.

Tying up French land forces in Europe was important because it prevented France from using them to defend colonies, notably Canada, which the British attacked with a vengeance, once again relying on the Royal Navy to transport troops and support amphibious expeditions.  Without the Navy, the British would have captured neither Louisbourg in Cape Breton, Quebec nor Montreal in 1758, 1759 and 1760, respectively.

Similar campaigns cost France control over islands in the Caribbean, African coastal trade routes, and territories in India and the East Indies. After Spain entered the war as a French ally in its latter stages, the Royal Navy would defeat her as well in the Philippines and Cuba.

None of this was easy, since the Royal Navy’s portfolio also included protecting Britain’s extensive maritime commerce from French privateers and naval raiders, and, importantly, preventing a threatened French invasion, a task that required the Navy to bottle up French and later Spanish fleets in western ports and the Mediterranean. These major tasks wore down ships and men and cost a fortune, although their successful executions cost the French a good deal more.

The Seven Years War involved no large and decisive naval battles of the sort celebrated in the age of Nelson. Its naval leaders – Anson, Hawke, Boscawen, Keppel, Pocock, Rodney, and others – are mostly ignored today. Robson’s treatment makes clear that the conflict was a crucible, a testing ground that set standards for professionalism, excellence, and achievement that would make the Royal Navy in subsequent decades the absolute paradigm for all future naval forces.

Dr. Satterfield teaches military history and writes about weapon systems.  He has published two books on the U.S. Navy in World War II.