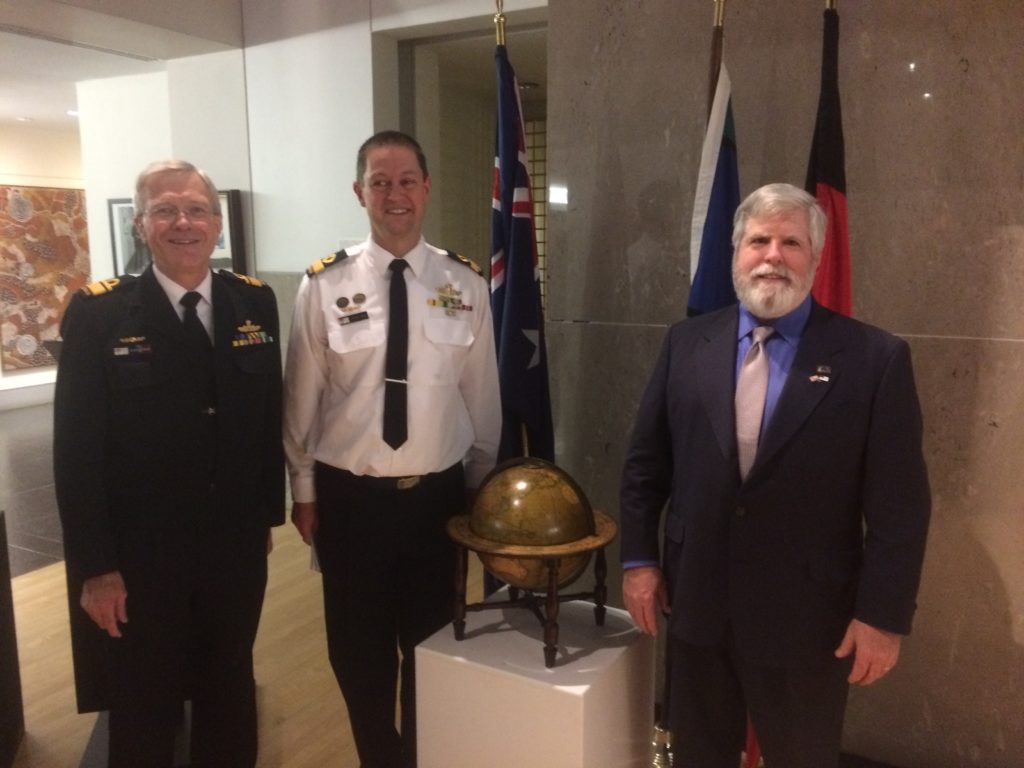 By Matthew T. Eng
One of the longstanding missions of NHF is to collect artifacts relevant to naval history. Often these objects are then donated to worthy institutions and organizations, chiefly the U.S. Navy, best suited to care for and display them. In the case of a rare 19th-century globe, acquired by NHF 20 years ago, the ultimate destination was not the U.S. Navy, but rather the Royal Australian Naval Heritage Collection. Recently several NHF leaders including Vice President Marty Bollinger and Executive Director Clair Sassin had the opportunity to transfer the globe to the Australian Naval Attaché at the Australian embassy in downtown Washington, DC. The occasion for the event on 17 November was the annual gathering of Australian naval officers serving in the United States, along with friends and colleagues from the U.S. Navy and other navies stationed in the DC-area.

London globe maker John Cary created a series of copper plates in 1800 that were used to create a bevy of high-quality and detailed globes of the earth. The globes he created were highly collectible and sought after in the early 1800s. The Cary globe donated to the Australian Navy was built in 1816, exactly two hundred years ago. “As anniversaries are very much on our mind these days since our Foundation turned 90 this year,” said NHF Vice President Marty Bollinger, “we wanted to take this opportunity to think about an ideal place to locate the Cary globe.” 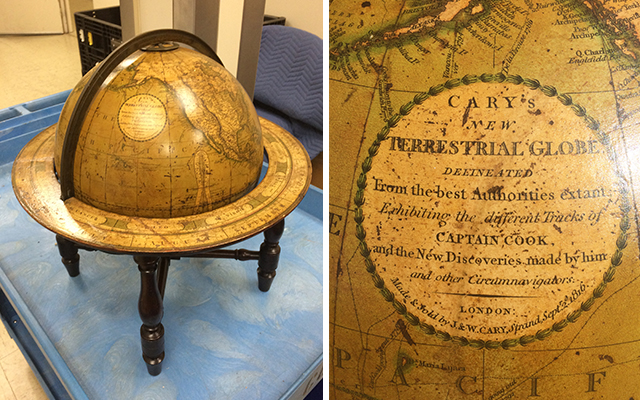 As Bollinger stated during his brief presentation speech at the event, NHF felt it prudent to donate the globe to the Australian Embassy for several reasons, the first being its specific features. “For the first time,” said Bollinger, “a globe contains a description of the continent of Australia, encountered by Captain Cook aboard HMS Endeavour in 1770 during the first of his three extraordinary voyages of discovery.” Cary included the routes of Cook’s voyages to Australia (called “New Holland” on the globe) in this particular globe. As a bonus, several NHF officials have a personal connection to Australia, including Bollinger. Marty lived in Australia from 1996 to 2002 within sight of Sydney’s Garden Island naval base. Former NHF Executive Director Captain Todd Creekman, USN (Ret.), spent several early years of his career in the western Pacific, once leading a parade of U.S. sailors through Newcastle, NSW, to commemorate the World War II Battle of the Coral Sea.

Bollinger closed his speech with a poignant observation about our continued friendship with the people and navy of Australia, and detailed why this kinship is more important than ever:

We felt this globe, on the 200th anniversary of its creation, would represent the longstanding and continuing friendship and cooperation between our peoples, our nations and our navies. It reminds us all that while we live on opposite sides of the globe, we share the same values and honor each other’s sacrifices in our common causes. It also reminds us that we are both, at our core, maritime nations and highlights the ongoing importance of the Royal Australian Navy and the United States Navy in the destinies of our countries.

Special thanks to Captain Todd Creekman, USN (Ret), and Clair Sassin for taking photos during the event.