Books have always been popular gifts to present to deserving individuals during the holiday season, birthdays, and events such as retirements and changes of command. However, when those books are inscribed to that individual – well that’s way cool and very meaningful!

The Naval Historical Foundation is providing the opportunity for employees at the Washington Navy Yard and visitors to meet and converse with some of naval history’s top authors and editors at its two-day used book sale scheduled for Tuesday, November 15 and Wednesday, November 16 inside the Navy Museum.

On November 15, the troika of authors featured will include Dr. Edward Marolda from 10 to noon, Rear Adm. William J. Holland USN (Ret.) from noon to 2, and James D. Hornfischer from 2 to 4.

On the next day Dr. David F. Winkler and Vice Adm. Dirk Debbink USN (Ret.) will be on hand over the noon hour to do co-signing.

Dr. Marolda, the former “Senior Historian of the Navy” will be signing his book The Washington Navy Yard: An Illustrated History. First published in 1999, this soft-covered book was updated in 2013 by the Naval Historical Foundation and honors those who lost their lives in the tragic shooting at Naval Sea Systems Command. For employees working inside the Yard’s brick walls having an interest in their historic surroundings, this is a must-have book!

Following Dr. Marolda, Rear Adm. “Jerry” Holland will be on hand to sign The Navy. The hard-bound white-covered book featuring a metal Navy emblem on the cover likely is already owned by many on the Navy Yard as there are some 400,000 copies in print since the book was first offered for sale in 2000. The editions that Rear Admiral Holland will sign are of recent vintage and take the history of the Navy up to near present. A well-known author and book reviewer, Holland served as editor-in-chief for the book that includes a chapter on the post-World War II U.S. Navy written by the aforementioned Dr. Marolda! 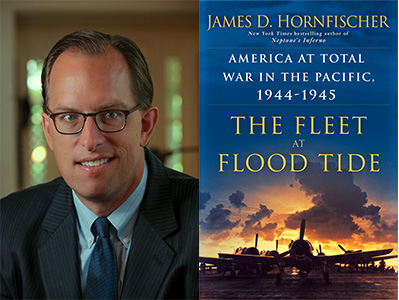 James D. Hornfischer, author of The Fleet at Flood Tide: America At Total War in the Pacific, 1944-1945

To close out the afternoon that first day, James D. Hornfischer from Austin, Texas, will visit the museum to sign his latest book The Fleet at Flood Tide: America At Total War in the Pacific, 1944-1945. The New York Times bestselling author of Neptune’s Inferno which detailed the Navy’s role in the Guadalcanal campaign, Hornfischer draws on new primary sources and personal accounts of both Americans and Japanese to provide a thrilling narrative of the climatic end-stage of the Pacific War, focusing on the U.S. Invasion of the Mariana’s Islands in June 1944 and the momentous events that it triggered. With the book just arriving on the shelves of bookstores around the country, it is anticipated that this will be a top-selling book over the Holiday Season.

On the second-day of the book sale the Naval Historical Foundation’s Dr. Winkler and former Chief of Navy Reserve Vice Admiral Debbink will team over the noon hour to offer inscriptions in Ready Then, Ready Now, Ready Always: More than a Century of Service by Citizen Sailors. A gorgeous coffee-table-style book created to celebrate the centennial of the Navy Reserve’s in 2015. In his review for Naval History magazine in August 2015, Rear Adm. Tom Brooks wrote:  “The collection of pictures and illustrations is one of the best in this reviewer’s experience. Anyone who is or was part of the Navy Reserve will want to own a copy of this book. But beyond that, anyone with an interest in naval history would be delighted to have this book in his or her library.” Dr. Winkler served as the primary author for the book while Vice Adm. Debbink served as the project manager.

For those who cannot make it to the book sale but would like to order one or more of the featured books and have them inscribed and then shipped, simply call the Navy Museum store with credit card in hand at (202) 889-2212 and the store staff will accommodate your order.

The book sale continues to be a popular event at the Navy Yard featuring books having naval-maritime themes. The Naval Historical Foundation continues to thank its members who have been downsizing their collections for donating the books for the sale and welcomes donations from others. The NHF, which is celebrating its 90th anniversary of 2016, also welcomes new members and membership incentives will be also offered at the two-day sale which will be hosted by its Navy Museum Store retail operation! For more about the Naval Historical Foundation visit www.navyhistory.org.