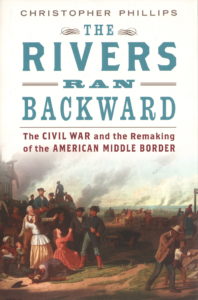 University of Cincinnati history professor Christopher Phillips wrote a different assessment of the complex cultural and political factors in the Border States before, during, and after the Civil War of 1861-1865.

Phillips challenges historical interpretations that paint the Border States of the old West, whether slave states or non-slave free states, as uniformly pro-Union and homogeneously supportive of President Lincoln’s wartime policies against the Confederate States of America. The author contends the wartime Border States of Kentucky, Ohio, Indiana, Illinois, Kansas, Missouri, and one could add Iowa, were not uniformly pro-Union, anti-South, and anti-slavery. Slaves and indentured blacks were held in bondage north of the Ohio River.

The complex causal factors of the war, Phillips contends, include slavery, and other political, socio-economic, moral, and geographic (regional and sectional) differences. Those disputes extended throughout the Old West and Trans-Mississippi West, and into the riverine and tributary areas of the Ohio, Mississippi, Cumberland, Tennessee and Missouri Rivers where pro and anti-slavery antagonists and slave owners supported the Union and Confederacy.

Phillips defines geographic factors as primary “cultural,” but physical geography (climate, topography, landforms) and economic geography also influenced regional perspectives. The author challenges the reader with interesting definitions of regional and historical geography, delineating conceptions of the historical and geographic “West,” and the characteristics of the “Border” states in the middle of the nation that replicated the “North” and South” due to human migration patterns.

“Peace Democrats,” and pro-South and anti-war “Copperheads,” clashed with Republicans over the Union war effort. Dissenters aided the Confederate cause, and favored ending the war, and letting the Confederate States of America secede, with the Federal recognition of CSA sovereignty. Many Northerners sympathized with the Southern secession and states rights assertions that caused the war. Divided churches, vulnerable Pacifist Quakers, Shakers and “Free Negroes” added to the volatile mix.

This book reviewer was introduced to the unique historical hypothesis of Wisconsin historian Frederick Jackson Turner, whose influential Frontier Thesis and Western Expansion ideas were published between 1893-1930 that explained his concept of American exceptionalism. The theory was based on the settlement patterns Turner perceived from the East to the West migration of Euro-Americans through the different and challenging cultural and physical regions (sections) of the United States.

However, other historians and geographers, this reviewer included, contend that Turner’s sectional thesis was a sophisticated historical and geographical analysis of regional differences and issues.

Phillips explains how the Border States drew into slavery, abolition, and secession debates from the 1850s to the outbreak of the war. He also discussed how national and state elections exacerbated conflicts. Clashes between pro-Confederate and pro-Union civilians and soldiers; disputes between supporters and opponents of Lincoln’s Emancipation Proclamation; and how the war influenced that vast geographic realm then and now.

As a former college instructor of history, anthropology, and geography, I much appreciated the author’s eclectic applications of regional geography to historical understanding. Phillips consulted extensive primary and secondary sources, including newspapers, biographies, documents, and historical society collections.

The author’s interpretations are scholarly, readable, and compelling. This is illustrated in the following passage: “Most historians hold that the Ohio River was a clearly defined and static demographic and political boundary between the North and South and, by its distinctive cultures, an extension of the Mason-Dixon Line developed decades after the famed surveyors completed their work in 1764. Once settled, the new states west of the Appalachians formed a fixed boundary between freedom and slavery, extending the border that inevitably produced the war.” Professor Phillips contends, “None of these beliefs is accurate,” and devotes the balance of his book to explain why.