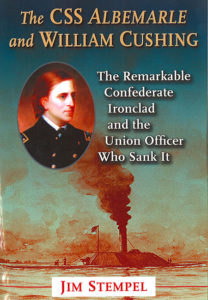 Writing years after the Civil War, Gideon Welles remarked of William B. Cushing: “…the great chief of the American Navy, Farragut…said to me that while no navy had braver or better officers than ours, young Cushing was the hero of the War.” Jim Stempel’s book makes it clear that the statement was very nearly the simple truth; there was no one like Cushing. Once the whole nation knew his name; today his difficult, almost suicidal, and technically sophisticated exploit of sinking a Confederate ironclad with a steam launch using a spar torpedo is still known, perhaps, to students of naval and Civil War history. This attack was just the most famous of many daring and dramatic actions,  particularly gunboat and small boat raids and reconnaissance on the waters of the sounds behind North Carolina’s Cape Hatteras, and up the many shallow rivers that flow into them. Cushing was only 18 years old when his wartime career in the U.S. Navy began. He quickly proved himself a master of small unit tactics and leadership. He was enterprising, ingenious, and utterly fearless.

While being a master’s mate on the Minnesota, he discovered for the first time the “wild pleasure and excitement” of battle – the true Viking spirit during the bombardment of the Confederate fortifications guarding Hatteras Inlet. On many occasions, while leading his sailors afoot and ashore, he encountered large enemy forces – once Confederate cavalry.  He instantly ordered his men to attack, only to have his opponents turn tail and run. Well – “L’audace, l’audace, toujours l’audace”; the real enemy of men in battle is confusion, not cowardice. Cushing had gifts which kept such actions from being rash or foolhardy. He had the sure presence of mind and eternal tactical judgment. Another secret weapon Cashing possessed was a thorough understanding of shoal-water seamanship. For example, during the attack on Ft. Fisher on the Cape Fear River, as a captain of a Union vessel, he sounded and buoyed a channel past the fort in his gig, under heavy fire. He also had remarkable endurance and stamina. On one raid he went 68 hours without sleep, in a boat or fighting ashore. Another quality he possessed was his relationship with his men. He was sympathetic and warm, but always definite and decisive; as a result, his men responded, as men usually do, to real leadership. For instance, on two occasions he asked his crew for a few volunteers, only to have them all step forward as one man. Finally, he had the technical expertise to develop the plan for attacking the Albemarle and mastering the intricacies of the spar torpedo created by John L. Lay (later to invent the wire guided self-propelled Lay torpedo).

Listing Cushing’s exploits thus may make him seem superhuman, but Stempel makes him real and human by letting him speak in his own clear and straightforward words. He does the same for many others involved, Cushing’s men, superiors, Confederate opponents, and civilian bystanders, which gives his book a compelling, vivid immediacy. Cushing certainly did not lack talented (and articulate) enemies, particularly the young naval constructor Gilbert Elliott. Elliot built Albemarle in a corn field over two years of battling bureaucratic bumbling and obstruction, and Commander James Cook, who took her into action against the squadron of Union gunboats that controlled the North Carolina sounds.

Stempel also gives proper credit to Confederate Navy Secretary Stephen Mallory for the strategy of building ironclad “rams”. They were simple in design, in most respects easy to construct, and did not require the sophisticated engineering of Ericson’s monitors. They proved formidable opponents – sometimes. A single ram could checkmate an entire squadron of heavily armed wooden warships, until the antidote, a Union ironclad, appeared. Even then, confined to the harbor, the ram could provide a powerful deterrent to an attack on its base. The problem was completing them in time to forestall a Union waterborne assault. In his classic Iron Afloat, William Still says that perhaps fifty rams were laid down or contracted for, with only 22 completed. Furthermore, only a few of these appeared on the scene early enough to seriously threaten Union forces. In other words, the chief construction bottlenecks were the supply of iron for armor and decent engines before they completed a monitor.

Although they contracted Albemarle for the fall of 1862, it took nearly a year to accumulate the iron she needed, in the form of railroad rails, and another year to roll them into armor plate in Richmond and transport this back to the ship. In early 1864, anticipating Grant’s move on Richmond, Lee urged an effort to retake North Carolina’s ports and sounds, opening a potential supply route to Richmond and his army. But the support of the Albemarle was essential. On April 17, General Robert Hoke attacked the Roanoke River port of Plymouth at the same time as the Albemarle started down the river, with workmen still bolting on her armor. On the 19th, Albemarle attacked the two Union gunboats guarding Plymouth; the Union commander had linked his ships together with cables, hoping to catch and immobilize the ram between them where they could batter her at point-blank range. But Cooke avoided the trap, rammed and sank one gunboat, and severely beat up the other, which fled. Then Albemarle turned its guns on the Union troops defending Plymouth, bombarding them from the rear while the Confederate Army attacked from the front until they broke. As Still says “Thus ended one of the most successful combined operations conducted by Confederate forces during the War. Without question, the decisive factor was the presence of the Albemarle.”

The Confederates hoped Albemarle could similarly support their attack on New Berne, but this would require her to leave the Roanoke and enter and cross the sounds, where the Union squadron of seven wooden but heavily armed gunboats waited for her. On May 5 Albemarle met them at the mouth of the Roanoke where they fought a spirited and aggressive battle to stop her. They rammed her, pounded her with their heavy guns for hours, tried to use a spar torpedo and foul her screws with a net. One of the rare pitched naval battles of the Civil War which did not end in a complete Union victory, it is one of the high points of the book. Albemarle beat up her opponents badly, but slowly the battering found out her weak spots. One of her two guns was smashed, draft to her boilers fell as her smokestack was riddled, her steering gear was damaged. Had she been rendered defenseless, immobile, or both, she very possibly could have been captured; Cooke could not take the risk, and she limped back to Plymouth, abandoning the New Berne attack.

But she remained the key to holding Plymouth; hence the necessity for Cushing’s near-suicidal mission to take her out, another high point of the story – but I’ll leave that to the reader.  This book is a dramatic and thought-provoking read. The book is thoroughly researched and devoid of any errors other than a few irritating misspellings (like “ordinance” for “ordnance”).  This book calls to mind many interesting parallels from naval history – the penetration of the anchorage of the Tirpitz by midget submarines comes to mind – but this would only have been a distraction from the book’s proper subject. And that is Cushing and the phenomenon of leadership. Indeed, the author’s brief description of Cushing’s brother’s death at Gettysburg is a much more appropriate digression. (He was one of the artillerists who stopped Pickett’s Charge.)  Leadership; in war, or any other kind of trouble, nothing can replace it. Indeed a strong measure of it can make up for many other deficiencies. But what is it? Where does it come from? When seasoned older men, Gideon Welles, Gustavus Fox, even Lincoln himself, first met Cushing, they plainly saw him as a gifted and talented young man – good officer material. Others, like Admiral Porter, saw a reckless daredevil of a boy. But they all had no idea of what he was accomplished.

Robert P. Largess is the author of “USS Albacore; Forerunner of the Future” and articles on the USS Triton, SS United States, the origin of the towed sonar array, and the history of Lighter-Than-Air.