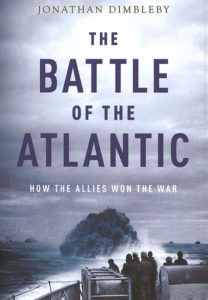 The long campaign between the Western Allies and Germany’s U-boat force during the Second World War is the subject of Jonathan Dimbleby’s new book, The Battle of the Atlantic: How the Allies Won the War. The central argument presented is that this battle was the war’s decisive campaign within the European Theater. The book contains a well-crafted and engaging narrative that drives home the point that the Allies could not have won the great land battles which stretched across Europe, the Mediterranean, and North Africa without the defeat of the U-boats. Dimbleby, a superb writer, has skillfully woven together the actions and motives of senior political and military leaders with the experiences of individual sailors, merchant seamen, airmen, and civilians on both sides of this titanic struggle. His accomplishment is a most valuable addition to the extensive historiography of the Battle of the Atlantic.

In this meticulous and balanced account of the Atlantic Campaign, the author addressed all of its principal events and complex factors. The stunning scope of the “tonnage war” is portrayed regarding geography and strategy, along with perspectives of the individuals who fought and were affected by its many variations. The author’s extensive use of first-person accounts has created a far richer tableau than one typically finds in books on the war in the Atlantic, making for a compelling narrative.  In addition to insights on Winston Churchill’s deep-seated fear of the U-boat threat and Franklin Roosevelt’s strong desire to aid Great Britain while sustaining a policy of neutrality, the world of a Lancashire homemaker struggling with rationing, food scarcity, and tragic news from the battlefronts are all introduced to the read,er. The effects of pre-war decisions such as Admiral Erich Raeder’s emphasis on creating a traditional battle fleet for the Kriegsmarine rather than an expanded U-boat force, or Great Britain’s unpreparedness for the second Battle of the Atlantic, are explained through the successes and failures imposed on both sides of the conflict during its early phases. Later, he addresses the complex framework from which the competing sides of the campaign operate. The frustrations of Admiral Karl Dӧnitz, commander of the U-boat force, over competition for resources, unmet demands for support from the Luftwaffe, and the diversion of his submarines from the critical convoy routes are fully explored. While on the Allied side, an in-depth assessment addresses their struggle to achieve a satisfactory balance among the requirements for escort ships, patrol aircraft, weapons, sensors, crew proficiency, and the desperate need for merchant shipping. The blending of these strategic factors with the grim individual experiences of civilians and the battle’s participants on, under, and above the Atlantic is one of this book’s many strengths.

Although the author’s focus extends far beyond tactical details, the reader will still find an in-depth exploration of the key convoy battles that mark the ebb and flow of the Atlantic campaign, along with their near and long-term effects on the Allies’ eventual victory over the U-boats. Another distinct quality is the author’s rich portrayal of the interconnectedness of events unfolding in the Atlantic with the Red Army’s desperate defense of the Motherland in 1941 and 1942, the Western Allies’ Mediterranean campaigns in 1942 and 1943, and the growing British and U.S. Combined Strategic Bombing campaign. His point that victory in the Atlantic is the essential foundation for all of the Allies’ efforts against Germany is supported by a series of incisive analyses that begin with the survival of Great Britain in 1940 and extend to the opening of the Second Front at Normandy in 1944. Also, the author provides a comprehensive array of assessments of the key organizational conflicts that bedeviled both the Allied and Axis Powers. Of particular significance is the chapter titled ‘The Battle of the Air’ which provides a fresh and comprehensive examination of the Western Allies’ failure to maximize their employment of patrol aircraft in 1941 and 1942.

Reading The Battle of the Atlantic: How the Allies Won the War is a rewarding experience on multiple levels. Within a brilliant narrative, the complete story of World War II’s longest campaign is told from the perspectives of the senior leaders down to the individuals who fought the countless grueling battles that determined its outcome. The book also succinctly addresses the complex network of factors that ultimately led to the decisive defeat of the U-boats and established the importance of that victory to the ultimate success of the Allied Powers. With this important new book, Jonathan Dimbleby has restored the Battle of the Atlantic to its proper place in the history of the war in Europe.