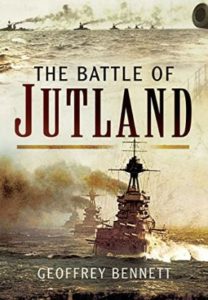 Few historians, on land or sea, can match the depth and breadth of the work of Captain Geoffrey Bennett. As a Royal Navy officer who served Great Britain in war and peacetime, his life would be an interesting read. By the end of his life, he was internationally renowned for his writings on both world wars, Lord Nelson, Trafalgar, and a series of novels enjoyed by adult and child alike.

Being in the midst of the World War I Centennial, Bennett’s The Battle of Jutland has been reissued by Pen & Sword Books Ltd.  The largest naval battle of “The Great War” has been written about extensively, but rarely by an author with a Distinguished Service Cross of his own.

The battle itself is well known to armchair and actual historians: how the Kaiser’s Vice-Admiral, Reinhard Scheer, commanding the German High Seas Fleet, hoped to lure –and defeat – Great Britain’s Admiral Sir John Jellicoe’s Great Fleet. A victory by Scheer would not only enable the German Navy to expand its influence from the North Sea to the Atlantic, but embarrass the greatest naval power than on earth and, perhaps, scuttle the century-old belief that Britannia still “ruled the waves.” In a two-day fight off Denmark’s Jutland Peninsula, 250 battleships, battlecruisers, destroyers, and other navy vessels fought a bloody engagement that left a host of questions for historians and naval commanders to debate ever since.

Captain Bennett’s narrative is a compelling combination of statistics, background development, chronological layout, and character study. His third chapter, “Der Tag,” opens with Admiral Beatty’s remark to  his king, George V, “We were haunted by the fear that possibly ‘the day’ may never come.” Then, over the next 32 pages, Bennett coolly describes “the day’s” fearful clash of battle cruisers, pausing in his narration to inform the reader of the inaccuracy of long-range naval guns at that time. It is a masterly twist; pages later, when the mighty German battlecruiser Lützow’s gunners find their mark, the resulting carnage becomes all the more shocking.

Captain Bennett takes us onward into battle, adding vignettes reminiscent of a Tuchman or McCullough, from a German official comparing Scheer’s tactics to Nelson’s at Trafalgar to a British light cruiser’s report that even the ship’s mascot, a black kitten, “did its duty nobly.” His descriptions of battle, such as “ghost-like columns of water thrown up by heavy enemy shells,” work in the reader’s imagination like a movie camera. As he tracks the two fleets in their nighttime maneuvering, Bennett succeeds in taking his reader right along, wearing both German and British uniforms. His detail is unerring, his storytelling compelling.

The last chapter, Who Won? weighs the claim of both sides before coming to its not-too-surprising conclusion. Appendices list the ships and commanders of both fleets, as well as The Harper Record’s essay on the battle. Maps serve as a handy resource to turn to as the conflict unfolds, but it is the photographs Captain Bennett chose that add to his tale, particularly those from the battle, and a magnificent one of Jellicoe, moving resolutely forward aboard ship, seemingly to walk right out of the picture.

In an essay on writing history, Barbara Tuchman recalled advice from a professor: “Will the reader turn the page?” Fifty-two years ago, Captain Bennett wrote quite a page-turner with The Battle of Jutland. It still is.

Tim McGrath, author of Give Me a Fast Ship, has earned the John Barry Book Award prize from the New York Navy League Council.