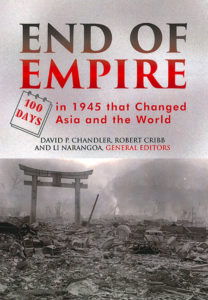 The hundred days that this book is concerned with are the days between 5 August and 12 November 1945. The book begins on 5 August 1945, as this is the day the U.S. dropped the A-bomb on Hiroshima. This bombing put into motion a chain of events that changed the political and economic face of the countries bordering the Asian Pacific Rim.

This book is a publication of the Nordic Institute of Asian Studies (NIAS) based at the University of Copenhagen, Denmark. The governments of Denmark, Iceland, Norway, Finland, and Sweden fund NIAS.

The book starts with an introductory chapter that provides an overview of World War II along the Asian Pacific Rim. The next section gives a quick summary of the 1945 political and military situation within the following twelve countries: Japan, Korea, Manchuria, Mongolia, China, Taiwan, Indochina, Thailand, Burma, Malaya, Indonesia, and the Philippines. These first two chapters set the stage for the heart of the book, a day-by-day accounting of events taking place within this region. While most Westerners consider 2nd of September, 1945, as the day World War II ended in the Pacific; the reality is that fighting did not stop on that date within the above twelve countries. Japan had, during its occupation of these countries, set up puppet governments filled by indigenous people who, having tasted power, were not about to quietly turn administration of their country back to a pre-war colonial government after Japan’s surrender. Fighting thus broke out between the indigenous peoples and their former colonial masters, groups of various political ideologies seeking control of their country, and between groups with ethnic and religious diversity. In many cases, the fighting experienced in these twelve countries following the surrender of Japan is more intense than the fight that took place when the Japanese conquered them.

For each of the days between 5th of August and 12th November, 1945, the editors have entered one or more facts about political and military events taking place within one of the twelve countries. Most dates also have a one or two-column entry that explores in greater detail a person or event listed under that date. The text is supported by photographs and illustrations that are unfamiliar to most Americans. The book closes with an overview chapter reporting on the happenings in these twelve Asian Pacific Rim countries during the period 1946-1950.

Charles Bogart is a frequent contributor to NHBR.