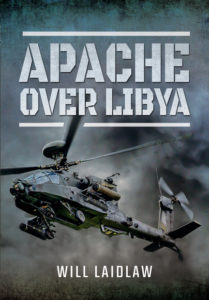 By Will Laidlaw, Pen and Sword, South Yorkshire (2016)

Lt. Col. Will Laidlaw, who served as commander of the UK’s 656 attack helicopter squadron during NATO’s 2011 intervention in Libya, personally flew night strike missions in from the helicopter carrier HMS Ocean. From June to August, his unit’s Apache helicopters fired 99 Hellfire missiles, 4,800 rounds of 30mm cannon, and 16 rockets at a variety of regime targets. His book, Apache Over Libya, offers a window into the UK’s maritime helicopter operations in Libya and a gripping combat narrative.

Ocean was already in the region conducting a planned training exercise for seaborne Apaches when Laidlaw received orders on May 23 to support NATO’s Operation Unified Protector. Previously in training, he encountered some challenges in adapting a land-based helicopter for maritime operations. Unlike helicopters designed specifically for maritime work, the Apache’s narrow undercarriage and high center of gravity were not ideal. Apaches also lacked a folding tail and automatically-folding rotors, making it difficult and very time-consuming to move them around Ocean. Most frighteningly, the Apache quickly sinks if forced to ditch in water, and escape is difficult for pilots heavily laden with survival gear. Nevertheless, pilots and sailors rose to the various challenges and devised solutions as necessary; for instance, they successfully reduced the blade-removal time from over an hour to 25 minutes.

Billed as an intensification of the campaign against the Gaddafi regime, the Apache deployment aimed to put psychological pressure on regime leaders and troops – in military parlance, creating a “cognitive effect” (37). On June 4, Laidlaw and a wingman flew the first of 22 missions against a radar antenna and a vehicle checkpoint, purposefully targeting equipment rather than soldiers. Survivors of this attack and subsequent ones soon spread the word about the Apaches. Gaddafi’s forces eventually learned to flee from the Apaches and save themselves rather than try to fight. The Apaches did on occasion kill regime troops in self-defense, but Laidlaw provides no body count. Apache Over Libya offers a profoundly unromantic view of war: one of the long stretches of exhausting work and preparation, fraught with moments of intense, high-risk combat.

The coalition lost no pilots or aircraft to enemy action through months of combat, but helicopter sorties were still highly hazardous. Much of Libya’s air defense network was ground down by coalition airpower, but potential threats remained. While NATO jets mostly destroyed strategic SAMs like the SA-5 had in March, Gaddafi loyalists repurposed their radars to target Laidlaw’s Apaches. The speed and altitude of jets provided them with a modicum of safety, but helicopters flying at 100 feet were in the range of anti-aircraft artillery such as the ZSU 23-4, shoulder-launched anti-aircraft missiles, and even high-caliber machine guns mounted on technicals. The most feared weapons were SA-24 missiles; three of which the Apaches narrowly defeated with countermeasures. Laidlaw’s mental calculations following the first SA-24 attack convey the dangers that he faced, and tough decisions he made are one of the most compelling parts of the book.

While Laidlaw entitled his book Apache Over Libya, a more accurate title might have been, Apaches Over Libya. Laidlaw never flew the Libyan skies alone; he always had a wingman by his side, watching for a variety of hazards. Besides the Apache pilots’ courage, a defining theme of the book is the effectiveness of the cohesive, skilled team that Laidlaw assembled. “The only thing that looked after an Apache was another Apache,” he writes (167). Camaraderie extended across nationalities too. One memorable display of teamwork was during a raid on Khamis Gaddafi’s Al Maya Barracks; the Apaches collaborated with an American Predator UAV to destroy four hidden T-72 tanks.

The book also has a subtle undercurrent of frustration: with superiors who canceled missions, criticized the relatively small numbers of sorties flown. He also questioned the value of maritime Apache operations; with politicians who cut funding or focused on the intervention’s costs, and with media outlets which misread the situation. An additional source of anger was the coalition’s obsession with tactical jets, which received more fanfare but were far less vulnerable than the Apaches. Laidlaw is also irritated by what NATO’s excessive focus on risk reduction, target verification, and collateral damage limitation (which sometimes canceled missions). After surviving the worst that Gaddafi could hurl at the helicopters, Laidlaw writes that his team’s confidence outstripped NATO’s continued caution. Aggravation grew as they canceled more missions in August. With the rebels gaining ground, the new, fluid frontlines were difficult for coalition intelligence to follow, and so dynamic sorties were difficult to approve.

While Laidlaw does not contend that the Apaches played a decisive, war-winning role in the combat; he notes that they flew only 1.5% of all NATO sorties.  He emphasizes the attacks’ psychological impact on Libyan forces. All in all, Apache Over Libya is an engaging account of the Libyan intervention that provides a firsthand perspective of aerial warfare, as well as a view of the challenges overcome along the way. Laidlaw’s book, a significant contribution towards the literature on Apache operations and NATO’s Libyan campaign, is the most compelling memoir of the war published to date.