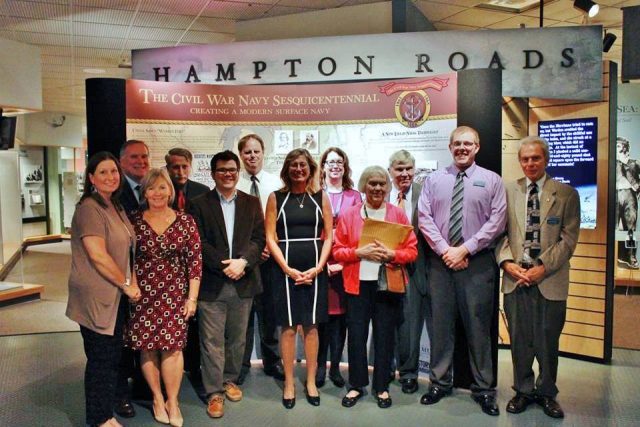 If you ever talk to a New York Yankees fan about their team, one of two things will happen. Undoubtedly, they will at first never shut up about how much better the Yankees are than YOUR favorite team (Go Nats). Said fan will then proceed to offer a long diatribe about the majesty of Yankee Stadium. They might talk about the smell of the stadium or all the iconic players that played there, most notably Babe Ruth. After all, Yankee Stadium is “The House That Ruth Built,” right?

Legends like Ruth live on long after they are gone, his memory and mythos built into the foundation of the team. Yankee Stadium was tangible evidence of his greatness. Anybody attending a game could not leave without recognizing it. The sport of baseball owes its success to Ruth, who carried the popularity of the sport on his shoulders throughout the “Golden Era” of Baseball history. Naval historians and museum professionals around the country owe the same debt of eternal gratitude to Mrs. Becky Poulliot, long-time director of the Hampton Roads Naval Museum. Becky is set to retire at the end of this month after nearly three decades of service to the Navy in Hampton Roads.

It is a bittersweet moment for me. I had the pleasure of working with Becky for seven years. I came to the museum in 2006. I was a wide-eyed 22-year old awaiting his fall semester in the MA program at ODU. I didn’t know what I wanted to study specifically beyond it having something to do with the U.S. Navy. That said, I didn’t expect to get the internship. I remember being so enthusiastic about the job, I crammed and tried to read every single page of every naval history book I had the night before. Nervous vomitous played a part in that morning’s routine. I recall stumbling through the interview; my enthusiasm overshadowed by my overwhelming nervousness. Thankfully, Becky took a chance and hired me for the summer. I’ll never forget it. 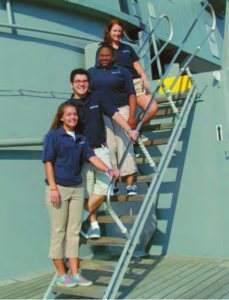 I cut my teeth in the field that summer. I gave tours aboard Battleship Wisconsin, conducted educational programs, and learned the general ropes of working as a museum educator. Throughout those few months, I would regularly meet with her in her office to talk about how it was going. She would also give me pointers and guidance to every question I had about working in a museum because I was completely unsure if it was a career I wanted to pursue. By the time I left HRNM to begin my fall semester at ODU, I was sold. I wanted to work in a museum. Specifically, I wanted to work there. I wanted to work for her.

So I came back the next summer. And the summer after that. I learned everything I know today about naval museums from working there. Every day was a new experience. Eventually, I worked my way up to a contractor position in the education department, ultimately leading to my three-year tenure as the museum’s Deputy Director of Education. None of that would have been possible without Becky.

As luck would have it, I got to work in the office directly across from her. I remember always peering in and seeing her on the phone with her headset. If anyone ever makes a statue of her, it would be in that posture for sure. She was always on the phone lobbying for the museum and its employees. I cannot stress how much she championed for her staff.

Becky was never the greatest naval historian in the world. She would be the first to tell you that. But she knew her museum and the artifacts housed inside of it down cold. She knew how to make such a small and specialized museum a source of pride for the Hampton Roads community. Under her tenure, the museum was successfully relocated to Nauticus in 1994 and saw the opening of USS Wisconsin as a U.S. Navy museum exhibit in 2000. Most notably, HRNM received accreditation from the American Association of Museums (now the American Alliance of Museums) in 2008 after a long and arduous process spearheaded by Becky.

Have you ever run a museum and a battleship successfully with less staff than you can count on two hands? I don’t think so. But Becky did. That battleship has sixteen inches of steel, but I’d venture to guess a shell would more easily break through that ship than her. The best part is she did it all with a smile and positive attitude. 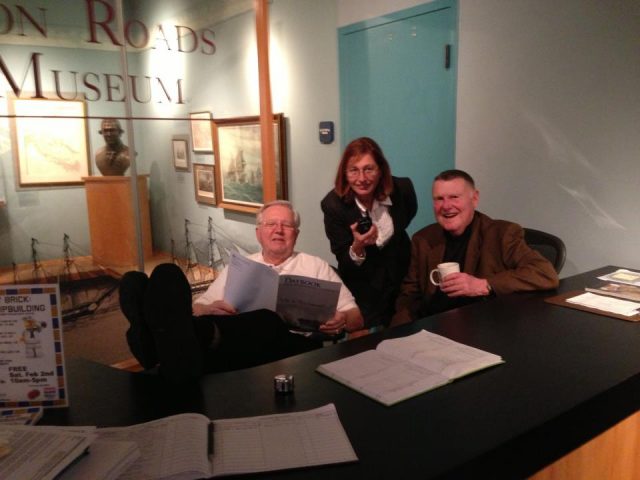 I left the museum in late 2013 to begin work at the Naval Historical Foundation, a job I would not have dreamed to get without Becky’s guidance and mentoring. There isn’t enough time to talk about all of the amazing things I got to do while there. HRNM continues to collaborate with NHF on new partnerships, most notably the LEGO Shipbuilding Program. Although I do not work there anymore, I consider myself lucky to have been a part of it under her tenure.

I still catch myself saying “we” when referring to HRNM; an affectation I am still particularly proud to do. It’s not a mistake, it’s just a fact.

Just before I left HRNM in October 2013, I wrote a long post on Facebook dedicated to my coworkers there. With regards to Becky and her legacy, I had this to say:

“Without your ilk, the lights would go off on our naval history, and generations would lose a little something every year.”

The Hampton Roads Naval Museum is “the museum that Becky built.” Becky was not around when the Hampton Roads Naval Museum began (she arrived in 1989 when HRNM was ten years old), but there is not a person who has ever worked with her that will tell you any different. Her blood, sweat, and tears are built into its walls. Like Ruth, the museum housed inside Nauticus is tangible evidence of her greatness, and the leadership she brought forth to her staff consistently since 1989. Indeed, naval history owes a debt of gratitude to Becky for her service. There are no monuments or statues to her memory there (yet) like Ruth. For anyone interested in working for a naval museum or studying naval history, I would suggest Becky’s leadership example as your syllabus. Although she never served in the Navy, I would go to battle with her any day.

I want to teach my six-month-old daughter about my love of naval history one day. I also want her to know about the people that helped shape my career in the field and made a positive and lasting impact on my life. The first person I will mention is Becky, and the first place I will want to show her is Becky’s house: The Hampton Roads Naval Museum. I am so proud to be part of that family.

Fair Winds to one of the strongest women I’ll ever know. Thank you so much for giving me a chance to pursue my dreams. Now get some rest…you’ve earned it!