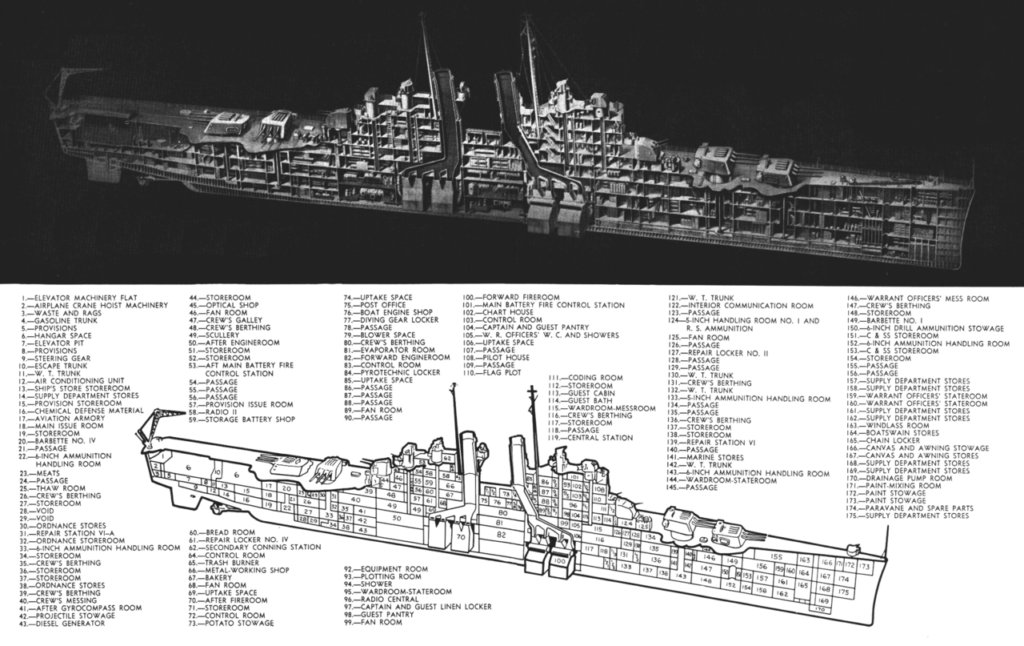 Technical drawing of a Cleveland-class cruiser. (ALL HANDS, 1958)

A major factor in the determination of the feasibility of conversion from the original Cleveland-class cruisers to the Independence-class aircraft carriers was the fact that the propulsion plants could meet the needs of both ship types, without major modifications. The cruisers had a design speed of 32.5 knots while the carriers which were 22 feet longer had design speeds of 31.5 knots. In both cases, these requirements could be met by their propulsion plants with relatively minor modifications. 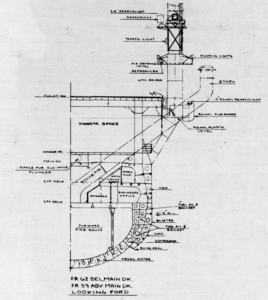 Both ship classes were fitted with 100,000 SHP (75 MW) quadruple screw steam plants that followed the general design practices for naval combatant ships of that era. This had very big advantages when it came to training and logistic support. In general, naval propulsion plants of that era made virtually no use of automation, instead dependent on relatively large well-trained engineering crews. Fortunately, a Booklet of General Plans for the USS Monterey (CVL 26) is available from the Historic Naval Ships association website that gives a good picture of the basic machinery arrangement of the carriers.

The major plant components include four General Electric cross compounded geared steam turbines, each rated at 25,000 SHP. Each set included a high-pressure (HP) turbine, a dual flow low-pressure (LP) turbine including astern elements, and a small cruising turbine for use during low-speed transits. The turbine packages appear to be virtually identical to the twin 30,000 HP sets found aboard the destroyers of that era.

Superheated steam was supplied at approximately 600 psi and 850 degrees F from four Babcock & Wilcox (M type) controlled superheater boilers. Boilers of this type could be found aboard virtually every major combatant ship during that period.

The basic machinery arrangement was in four main spaces with alternating firerooms and engine rooms from forward to aft. These spaces included:

The electrical plant on the cruisers originally consisted of four 600 kW ship service turbo generators, two located in each fire room, along with their switchboards. There was a 250 kW emergency diesel generator located in the forward engine room and a second 250 kW set located aft of the machinery spaces. As part of the carrier conversion, the ship service generators were upgraded from 600 kW to 750 kW.

The most significant change that would have been required to complete the carrier conversion was the relocation of the boiler uptakes from the center line to the starboard side. There were four individual smoke stacks located on the starboard side of the flight decks. There were air intakes for the forced draft blowers located on either side of the uptakes but their actual configuration is unclear.

The CVLs were each originally fitted with single hydraulic catapults. Therefore there would be no major changes to the steam plants required as would have been the case when steam catapults came along in the 1950s and 1960s. Later on, the ships were fitted with a second catapult.

The bottom line is that with the exception of the changes to the boiler uptakes and combustion air intakes, no major changes to the original Cleveland-class steam plants would have been required.

George W. Stewart is a retired US Navy Captain. He is a 1956 graduate of the Massachusetts Maritime Academy. During his 30 year naval career, he held two ship commands and served a total of 8 years on naval material inspection boards, during which he conducted trials and inspections aboard over 200 naval vessels. Since his retirement from active naval service in 1986 he has been employed in the ship design industry where he has specialized in the development of concept designs of propulsion and powering systems, some of which have entered active service.