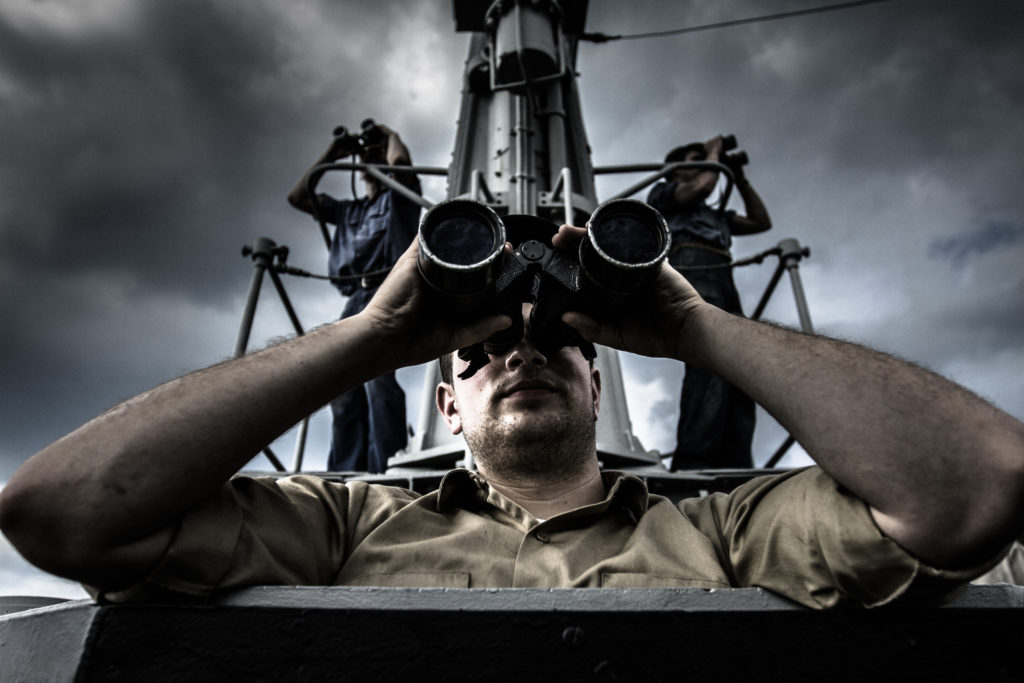 Episode five of the Smithsonian Channel’s World War II submarine saga, Hell Below, is the series’ second installment showcasing American efforts during the war in the Pacific. Titled the “Destroyer Killer,” this latest chapter deals specifically with Commander Sam Dealey and the fifth war patrol, May-July 1944, of the Gato-class submarine USS Harder. As was the case with episode three, “America Fights Back,” detailing the exploits of Lieutenant Commander Dudley “Mush” Morton during the third war patrol of the USS Wahoo, the producers offer a case study intended to draw attention to one officer’s tactical brilliance, while also illuminating some of the general conditions and concerns attendant upon the American conduct of submarine warfare.

As entertainment, the production team for this episode tells their story well. The show is suspenseful and conveys a sense of the harrowing nature of life in the submarine service. While the CGI scenes used to portray the submarine in the attack and under attack will be familiar to anyone who has watched the previous programs, the story is not harmed by these redundant images. The greater problem is that the story is perhaps too big for the 46 minutes allotted to its telling. Considering that the title for this installment is the “Destroyer Killer,” there is not much coverage of Dealey’s efforts in that endeavor. Indeed, there are descriptions of two destroyer sinkings in this program, but only one of those took place in the third patrol. Dealey and the Harder sank three destroyers on that famous patrol, but no mention is made of two of the three victims.

Despite the paucity of information on the destruction of Japanese destroyers, the show is full of action depicting a very eventful patrol. The real centerpiece of the program is Harder’s rescue of a team of Allied scouts from Borneo. In addition to that, Harder also played an invaluable role in gathering intelligence that was essential to Admiral Raymond Spruance in the run-up to the battle of the Philippine Sea. With so many things happening in a relatively short span of time, it is no wonder that this episode did not have a single focal point. In that regard, this case study, with its three storylines, does a commendable job in casting light on the versatility of the U.S. Navy’s submarine forces in the Pacific.

If one is interested in gaining a better understanding of the tactical level of war for those fighting beneath the waves in World War II, then this episode has value. The strategic stage is set early in the program and, unlike the episodes dealing with the battle of the Atlantic, the show does not discuss much regarding what would be deemed the operational level of war (most likely a function of the different character of the theaters and the navies involved). In episode five the show quickly progresses from a very brief overview of the war in the Pacific to the story of one sub conducting one patrol.

As with the other episodes in this series, there are many useful graphics to help understand how submarines such as the Harder functioned, and how they were combated. The graphics enhance insightful commentary from a host of authorities intent on addressing the action from both sides of the conflict. However, unlike the editions touching on the battle of the Atlantic, this episode is not as strong in detailing the enemy’s responses to the actions of the show’s protagonist. Professor Brian Hayashi does discuss Japanese efforts in the fight against the submarines, but his comments are general and tend not to address anything specific to the Harder’s patrol.

Regardless of the points of criticism raised in this review, this program’s merits significantly exceed its faults. Compared to other CGI-enhanced documentaries describing the Pacific War (Battle 360 and various episodes of Dog Fights come to mind), “Destroyer Killer” and Hell Below do an admirable job of story telling. The mix of CGI, re-enactors, and expert commentary blend remarkably well to provide a palpable sense of Dealey’s challenge. The show may not offer a complete account of the Harder’s fifth war patrol, but it does an excellent job of highlighting the exploits of a great commander, and a remarkable form of naval technology.