The Naval Historical Foundation is saddened to hear of the loss of a friend of naval history last Saturday with news of the passing of Jack Taylor in St. Louis, MO. He was 94.

Jack Taylor as an aviation cadet in the Navy in 1943. Photograph by the U.S. Navy. Courtesy of Jack Taylor. (via mhmvoices.org)

One of the legendary and tragic stories to arise from the Battle of Midway was the plight of Torpedo EIGHT. With no fighter escorts, this torpedo plane squadron was mauled by Zero fighters and faced a hail of anti-aircraft fire. No aircraft and only one pilot survived the attack. Three years and three months later, another torpedo plane squadron attempted a similar attack against one of the largest battleships ever built, the Musashi. However, this time the Japanese were not able to bring the brunt of the anti-aircraft defenses against the attackers due to the covering actions of Hellcat fighters swooping down on the superbattleship with guns blazing. Ensign Jack Taylor was one of those fighter pilots who performed not one, but two strafing runs against one of Japan’s most formidable warships. With Taylor and his squadron mates suppressing the Musashi’s anti-aircraft batteries, the torpedo planes and accompanying dive bombers dropped their weapons and hit their mark, sending the superbattleship to the bottom of the Sibuyan Sea.

Taylor’s fighter squadron served as a component of Carrier Air Group FIFTEEN.  When he arrived on the USS Essex as a replacement pilot in late June 1944, the squadron had already distinguished itself in the famed “Marianas Turkey Shoot” splashing sixty-seven of the attacking enemy aircraft. During the remaining months of the deployment, the squadron claimed the destruction of 500 to 600 more aircraft. Twenty-six pilots scored five or more kills, to earn the coveted title of “Ace.” Having credit for two kills, Taylor was not among the twenty-six. However, while only mentioned briefly in Edwin P. Hoyt’s McCampbell’s Heroes: The Story of the U.S. Navy’s Most Celebrated Carrier Fighters of the Pacific War, Taylor’s role is significant as he flew as a wingman to many of the aces, including Group Commander David McCampbell, to insure these pilots could press forward with their attacks without fear of ambush. Consequently, Taylor’s receipt of his two Distinguished Flying Crosses and other citations were well deserved.

On July 9, 2001, I had the opportunity to fly out to St. Louis to interview Mr. Taylor. Having flown in such an elite squadron at a critical time of the war, Taylor’s recollections were most welcomed. In addition, he provides excellent insights about the flight training process that thousands of other aviators experienced. For the transcript of this interview click HERE. 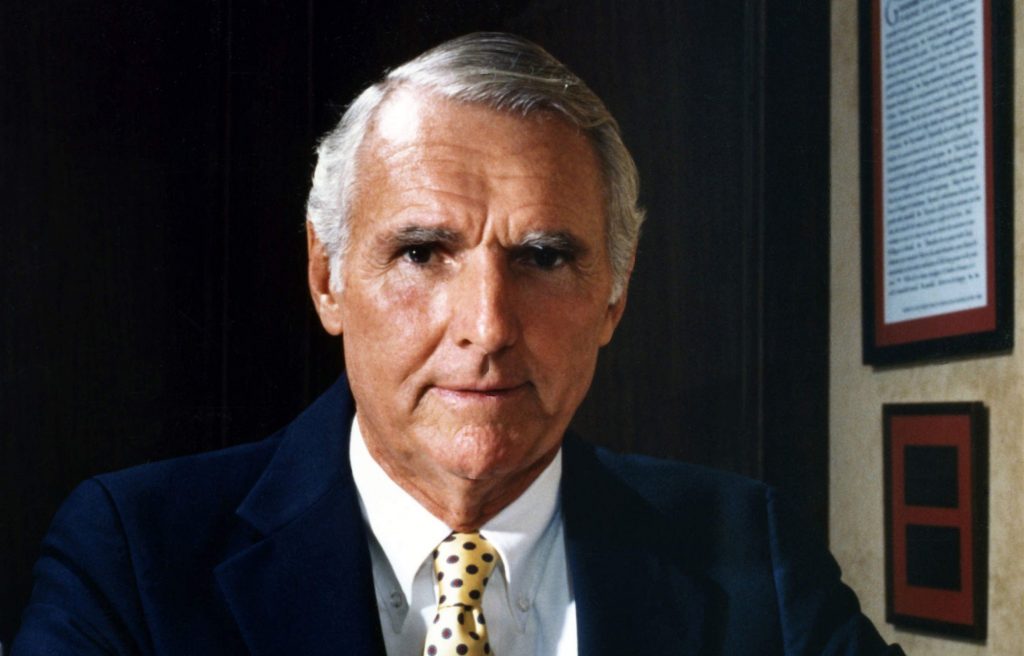 The interview was made possible due to Jack’s son Andy Taylor. Thanks to the Taylor’s continued support for the naval history enterprise, the Naval Historical Foundation presented him this year’s NHF Distinguished Service Award at the National Maritime Awards Dinner held last April 21st, at the National Press Club in Washington DC.

While the presentation recognized the company’s generous support to organizations such as the U.S. Naval Institute, the National Museum of Naval Aviation, and the Naval Historical Foundation, the presentation also served as homage to the father Jack.

In his remarks before the presentation, Admiral Sandy Winnefeld, recently retired as the Vice Chairman of the Joint Chiefs of Staff and commanding officer of USS Enterprise (CVN 65) during her 20th deployment, at the opening of Operation Enduring Freedom following the September 11, 2001 terrorist attacks on the US, talked briefly about “the remarkable connection that the Taylor family has with the United States Navy” – a reference to Jack Taylor who flew F6F Hellcat fighters from USS Essex (CV 9) and USS Enterprise (CV 6) during World War II. He eventually named his new car rental company after the Enterprise.

As a tribute to the Taylor family patriarch Jack Taylor’s World War II service, NHF Chairman Admiral William J. Fallon presented Andy and his family with several framed photographs of Enterprise (CV 6). Andy Taylor spoke briefly about the honor of the award. “I am proud to continue my father’s Navy legacy,” he said in his acceptance speech. His final remarks about his father echo the unique way naval history comes together, and continues to enthrall us today:

We at the Naval Historical Foundation concur as we mourn the passing of another veteran from “the Greatest Generation.”