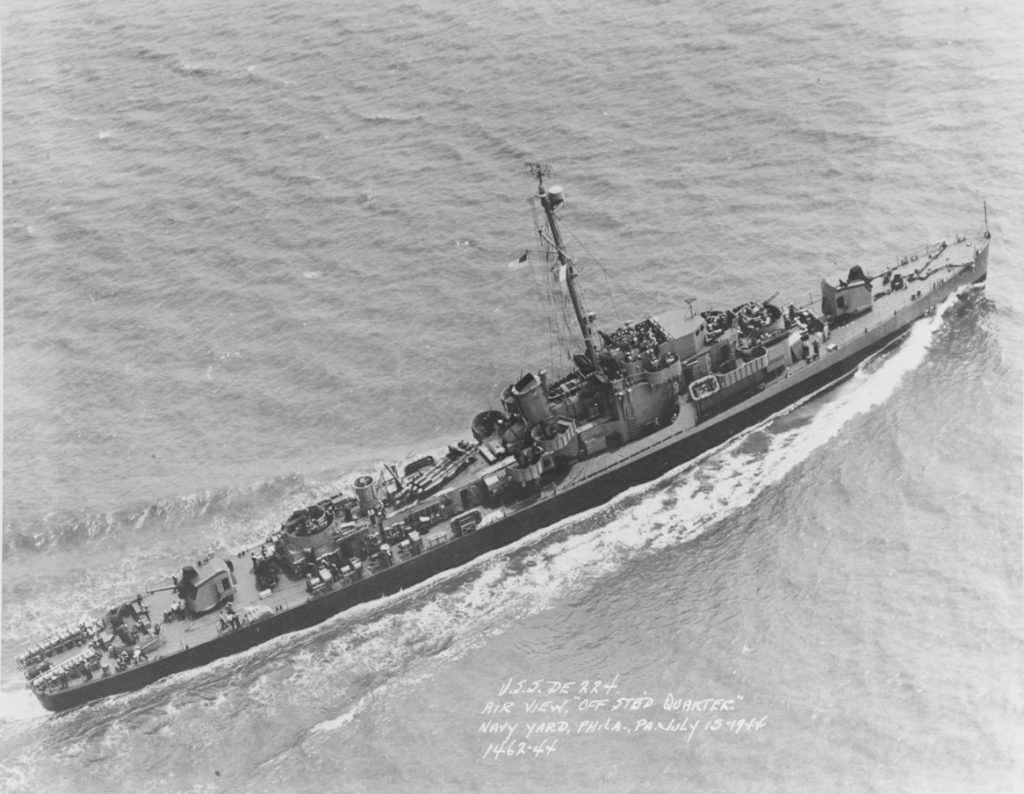 r>Destroyer Escort (DE) was the original US Navy classification for ships designed with endurance to escort mid-ocean convoys of merchant ships. During World War II their missions evolved into vital parts of hunter-killer groups where in combination with escort carriers (CVE) they were to play a significant role in winning the Battle of the Atlantic. The designation Destroyer Escort (DE) continuously applied to many post-war designs up until 1975 when they redesignated as frigates (FF) at the direction of the Chief of Naval Operations (CNO). Their primary functions were to defend against aircraft and detect, pursue, and attack submarines. The ships reached speeds ranging between 21 and 24 knots, therefore, they were unable to keep up with the fast carrier battle groups. However this speed was more than adequate for anti-submarine patrols, and the ships had a tighter turning radius than the fleet destroyers.

The original design was in response to a request from the United Kingdom under the Lend-Lease Act, which passed into law in March 1941. The UK asked the US to design, build, and supply an escort vessel that was suitable for anti-submarine warfare (ASW) in deep open ocean operations. The US came up with a design they referred to as the British Destroyer Escort (BDE). A little-known fact was that the first five ships of the class (DE 1, 2, 3, 4, and 12,) were transferred directly to the UK with this designation where they became the Captain-class Frigates. These ships, built at the Boston Navy Yard, all entered service in early 1943. The first ship to enter US Naval service as a DE was USS Evarts (DE 5) which entered service in April 1943. Over the next three years over 500 of these ships were built with 440 remaining in US service and a total of 78 transferred to the UK where they would serve as the Captain-class Frigates.  During the war, 95 DEs were converted into high-speed transports (APD).

There were six different ship classes built under this program. A significant difference between the ship classes was the use of four different propulsion systems which included:

In general, these ships all had similar hull characteristics. As a result of lessons learned with the first at 289.5 feet. Evarts-class ships, all of the remaining ships had 306 ft. lengths. Design displacement varied between 1430 and 1740 tons. In general, the steam powered ships (TE, TEV, and WGT) has designed speeds of 23 to 24 knots while the diesel powered ships (GMT, DET, and FMR) rated at 21 knots. On the other side of the coin, the diesel powered ships had high maintenance requirements and were subject to breakdowns. Another significant difference was that the main gun batteries on the Rudderow and John C. Butler-classes consisted of a pair of 5”/38 mounts while the earlier ship classes had three 3”/50 mounts.

The hunter-killer groups played a significant role in winning the Battle of the Atlantic. There has been a tendency to overlook their importance because the groups were no longer needed and most of the escort carriers were decommissioned because they could not handle more modern jet aircraft.  The remaining DEs were assigned to reserve training; anti-submarine coastal patrols and radar picket duties.  At least four turbo-electric drive ships came outfitted with amidships cable reels allowing them to serve as floating power stations. A separate article entitled “Going Ashore: Naval Ship to Shore Power for Humanitarian Services” described them. In the mid-1950s, twelve ships were converted into radar picket vessels (DERs) where they operated in conjunction with 16 Guardian-class radar picket ships (YAGR) which were converted from Liberty ships. Their mission was to extend the Distant Early Warning (DEW) line on both coasts. A total of 43 of the ships transferred to foreign navies under the Mutual Defense Assistance Program.

By the mid-1960s, most of the World War II DEs had been decommissioned. The last one to remain in active service was the Rudderow-class USS Parle (DE 708)  with was decommissioned in July 1970. Two ships are still in museum service: the USS Slater (DE 766) in Albany, NY and the USS Stewart (DE 238) in Galveston, Texas.

USS Parle (DE 708) The last in service (via NAVSOURCE)

The first post-World War II escort ships built for the US Navy were the Dealey (DE 1006)-class destroyer escorts. These ships were only slightly larger than their predecessors. They had only a single screw driven by a geared steam turbine rated at 20,000 SHP. This addition gave them a design speed of 25 knots. They ship included twin three-inch guns, ASW rockets, and six depth charge launchers. The ships had a large bow mounted SQS 23 sonar dome and they had hangars and landing pads for drone anti-submarine helicopters (DASH). The 13 ships of the class entered service between 1954 and 1958. Unfortunately, the DASH helicopters proved to be very unreliable, and this contributed to the limited life of the class. All had been decommissioned by 1973. There were also four ships of the Claud Jones (DE 1033)-class that was essentially diesel powered versions of the Dealey-class ships. Four diesel engines driving a single screw rated at 9240 SHP propelled Dealey-class ships, which gave them a rated speed of 21-22 knots. These ships entered service between 1956 and 1959 and they only had limited service lives for the same reasons as their predecessors. All had been decommissioned by 1974.

The second generation of the post- World War II escorts was the Bronstein-class ships. These are considered by some to be developmental ships. They were substantially larger than all of their predecessors. However, only two ships of the class were built. The USS Bronstein (DE 1037) and the USS McCloy (DE 1038) entered service in 1963. They were re–designated as frigates (FF) in 1975. Both ships were decommissioned in 1990 and sold to the Mexican Navy. Garcia-class frigates succeeded them and were the last ships designed to handle the DASH drone helicopters, which by then had proven to be a failure due to their unreliability. 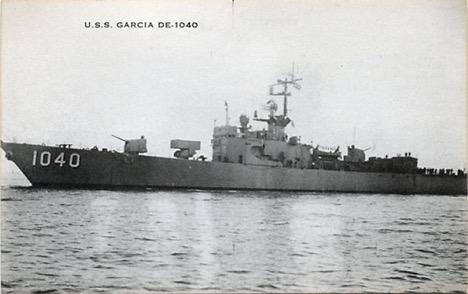 The Garcia (DE 1040)-class ships were a larger follow-on version of the two Bronstein-class ships. They incorporated some upgrades over the previous ship classes including the capability to accommodate the manned SH-2 LAMPS (Light Airborne Multi-Purpose System) helicopters. The ships were considerably larger than any of their predecessors being 414.5 ft. in length. The sing screw ships came equipped with large SQS 26 bow mounted sonar domes and fin stabilizers. Their armament consisted of a pair of single 5”/38 gun mounts, ASROC (Anti-Submarine Rockets) MK 32, and MK 37 torpedoes. The 11 ships of the class commissioned between 1964 and 1968 and they served up into the late 1980s. One ship of the class, the USS Glover (AGDE 1) commissioned as a research and development ship. There were six additional ships of the Brooke (DEG 1)-class which was virtually identical to the Garcia-class ships with the exception that they carried the Tarter Guided  Missile system, which replaced the after 5”/38 gun mount. Both ship types had 35,000 SHP single screw steam turbine plants which gave them a design speed of 27 knots. A feature peculiar to both classes was that they came with pressure-fired boilers which supplied steam at a design pressure of 1200 psi and a temperature of 950 Deg. F. These boilers fitted with supercharger units which consisted of a gas turbine which operated on exhaust gas driving an axial flow compressor which supplied combustion air to the boiler furnace at pressures up to approximately 70 psi. The superchargers fitted with auxiliary steam turbines were required to be used at low firing rates. The boilers were cylindrical in shape and equipped with top mounted burners. They took up far less space than conventional boilers of the same rating. Nevertheless, they were plagued with numerous problems due to reliability, logistics, and training and were never used on any subsequent ship classes. The follow on Knox (DE 1052)-class ships came fitted with conventional boilers. All of the Garcia and Brooke-class ships redesignated as Frigates (FF) in 1975.

In general, it can be stated the most significant problems encountered with all of the post-war designs up until this time were a failure of the DASH helicopter systems and difficulties with the pressure-fired boilers. The Knox (DE 1052)-class ships were a follow-on design which incorporated many of the lessons learned discussed in this paper. The purpose of this post was to review the factors that led up to the conception of the Knox-class ships. The Knox-class ships themselves will receive mention in depth in a later article. The 46 ships of the class constituted the largest group of ships commissioned in the post-World War era as Destroyer Escorts.