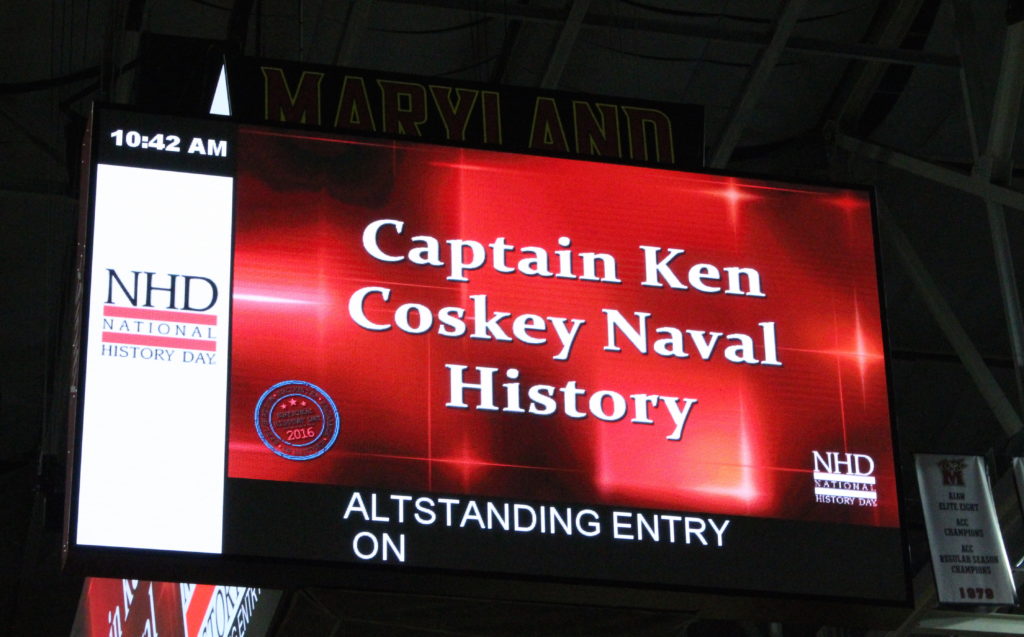 It is always refreshing to see young adults learning and interpreting history with passion and dedication. With so much emphasis on science and technology in our school systems today, one might wonder if a fire for the liberal arts still burns in our country’s young minds. In no place is that fire burning brighter than at the annual National History Day academic competition at the University of Maryland in College Park. Thousands of middle and high school contestants and families from around the world came together for a riveting awards ceremony at the close of the event on 18 June.

The event is the culmination of a busy week for these young scholars. Students in middle and high school showcase their history projects, ranging from a variety of topics and presentations, to a group of expert judges. Awards are given according to type of presentation and subject matter, including naval history.

Naval Historical Foundation staff member Matthew Eng attended this year’s event to help hand out the Captain Kenneth Coskey Naval History Prize. The prize is named for the late Captain Ken Coskey, a Vietnam War combat aviator and Prisoner of War, and former Executive Director of the Naval Historical Foundation. Rosemary Coskey, wife of Captain Coskey, presented the award and generous $1,000 cash prizes to the junior and senior division winners. Thanks to the Coskey family’s generosity, awards were given to both high school and middle school representatives for the best naval history projects in their category. Captain Coskey was a longtime supporter of National History Day up until his death in 2013. 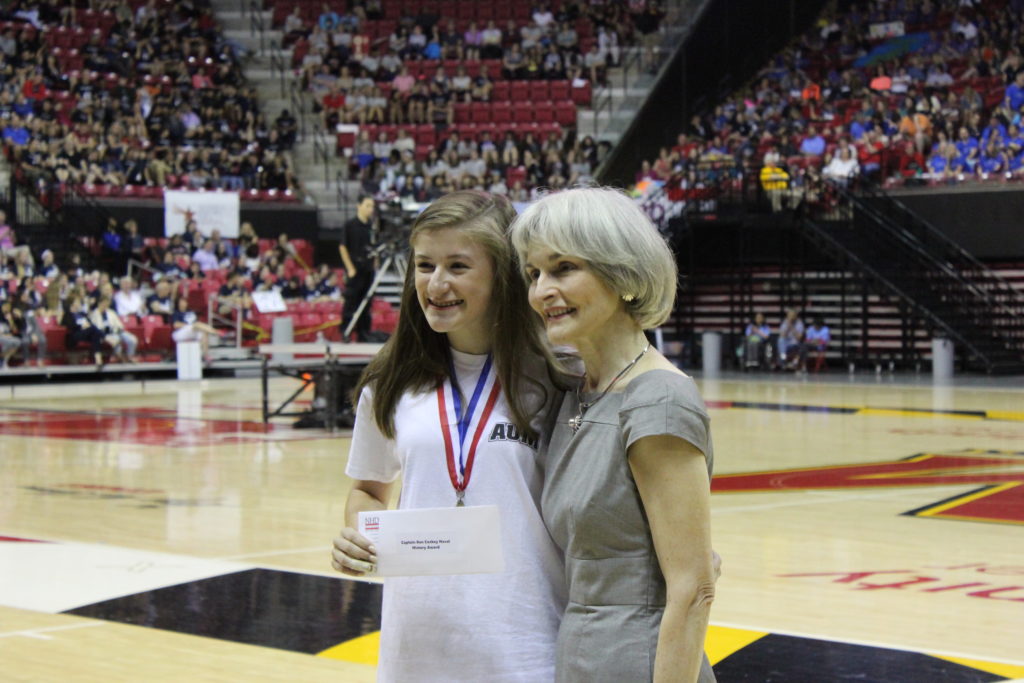 The Junior Division Award was given to Cassi Taylor of Mobile, AL, for her Junior Individual Website titled “Exploring the CSS Alabama: Encounters of the Confederate Raider and the Fiery Exchange with the Kearsarge.” For Cassi, a naval topic was a “natural choice.” She used her location along the Gulf Coast as inspiration for her NHD Project. “The Gulf Coast area has an important place in our nation’s history, particularly that of the Civil War,” Cassi said in an email interview. “I love to learn about my hometown.” Interestingly enough, the Gulf Coast brought up the research topic of Semmes and his encounter with Kearsarge, all the way across the ocean off Cherbourg, France:

“As I was preparing my project in 2015 on the Battle of Mobile Bay, I realized that many residents believe Admiral Semmes was part of that Battle instead of a separate effort.  I knew early on that I would like to start 2016 with this topic and see where the research would lead.”

Cassi wanted to know more about Raphael Semmes and why he was “so notorious” in the eyes of many in the Union. Research and an urge to discover more about history is what makes the National History Day competition great. According to Cassi, “one thing led to another,” and soon she discovered just how complicated a character the intrepid Semmes was. Her research led her discovering more about Semmes as well as the arduous Alabama claims process. Her hard work is clearly evident on her website.

As a lifelong student of history who now builds and updates websites, the work is verifiably impressive. Cassi’s work is cohesive, thorough, and well written. Her visual biography of Semmes includes poignant quotes, as well as a small section visually highlighting Semmes’ legacy in Mobile and beyond. What is more impressive is her outlook on history and historical scholarship in relation to naval history:

“History, and in this case, naval history, is our story.  It’s why we are where we are, and influences where we go in the future.  The saying goes that history often repeats itself, and while it usually doesn’t repeat exactly, the characteristics are so similar that we can really learn about what mistakes not to make again…if we pay attention.”

Cassi will attend Baker High School next year in the 9th grade. She hopes to return to National History Day in the senior division next year. 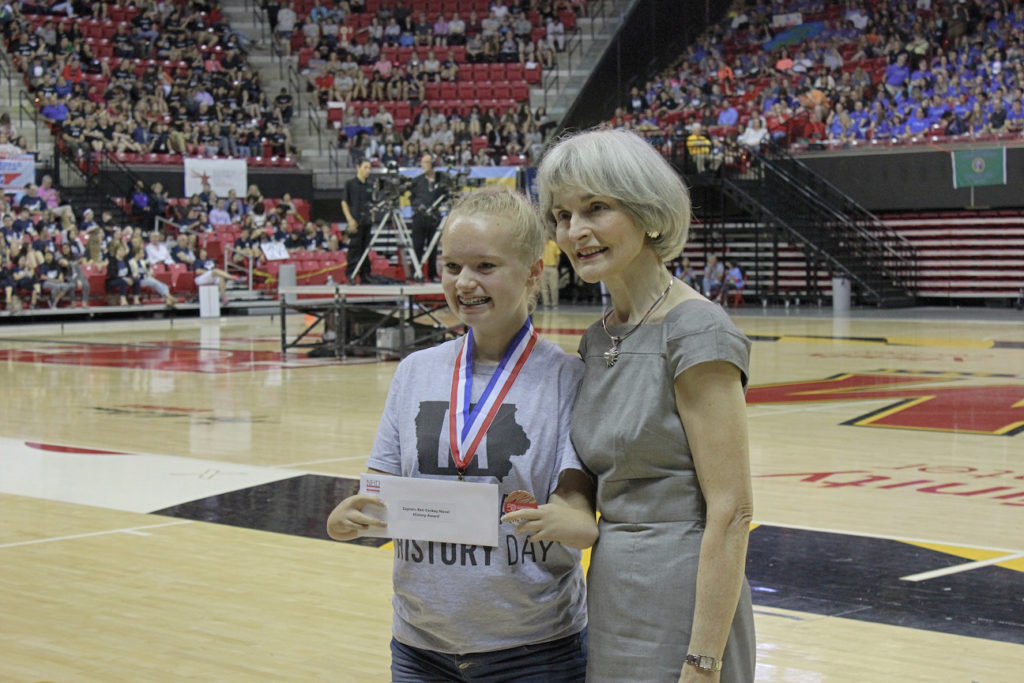 Allie Tubbs of Johnston, IA, is no stranger to National History Day.

She is a seasoned veteran in National History Day’s Junior level competition, specifically in the individual performance category where she shines. In 2014, Tubbs won the Junior Individual Performance category with her presentation titled, “Lou Hoover’s ‘Tempest in a Teapot’: Changing African American’s Rights and First Lady’s Responsibilities.” This past year, she won second place for “Jacobus tenBroek: A Leader with a Vision of Equality for the Blind and a Legacy of Constitutional Equality for All.” Her performance this year on the topic of Grace Hopper (“Grace Hopper Dared to Explore Computer Coding, Encounter the Glass Ceiling, and Exchange Intellectual Concepts”) helped her earn a sixth place finish in the Senior Division, and most importantly, this year’s Coskey Prize for Naval History.

Allie heard about Grace Hopper after reading several women’s history books while looking for a topic for this year’s theme of “Exploration, Encounter, and Exchange.” “When I heard of this year’s theme,” she said, “I immediately thought of Grace Hopper.” Over the course of the project’s rigorous demand for research, rehearsing, and study, Hopper became an inspiration to Tubbs. She further discussed why Hopper why she fit into NHD’s theme:

“Grace Hopper explored computer code when it was just being invented. In a male-dominated math field, Hopper became well respected for her hard work and intelligence. Hopper exchanged not only programming ideas but created communication between the vastly growing computer users at a time when many hardware pioneers were looking to patent every new idea.”

Like RADM Hopper, Allie identified with her hard work and dedication. It shows. This is the third year in a row that Tubbs walked away with an award from NHD. We can only expect the same next year. Her outlook on history echoed Taylor’s sentiment of hope and cautious understanding – two things the world desperately needs instilled in young minds today.

“All history is important to create an understanding for the future. Being able to know about many aspects of the past allows you to interact in an intellectual setting appropriately. You are able to form opinions on current events based on what history has taught us. Without the knowledge of the past we are doomed to repeat ourselves.”

The Naval Historical Foundation is looking forward to next year’s amazing projects! A special thank you to the families of Cassi Taylor and Allie Tubbs for coordinating the online interviews included in this piece. Best of luck to both of you in the future.