If war is hell, then undersea warfare during the Second World War must be at its centermost point.

Smithsonian Channel’s new series Hell Below bring viewers an up-close look at the grit, stale air, and darkness characteristic of undersea warfare during the Second World War. Submariners on both sides of the conflict endured hardships and miserable conditions for cause and country, making their wartime patrols a new style of horror beneath the waves.  The six-episode program developed by Parallax Film Productions in Vancouver aired its first episode, “The Wolfpack,” last night. The episode was a perfect introduction to the deadly chess game played by the Axis and Allied navies throughout the harrowing Battle of the Atlantic.

According to the Parallax Film Production website, filming for the series began last year. The production team wanted to keep the documentary as authentic as possible, and as such recorded many of the show’s segments on WWII-era warships. They shot interior and exterior scenes of the American submarine USS Cod in Cleveland, Ohio, German U-boat U-995 in Laboe, Germany, and HMCS Sackville, a Flower-class corvette, in Halifax, Nova Scotia. These specialized shots helped bring about a dramatic realism often lacking in many historical series today. Because of the cramped conditions, many interior shots were shot with a handheld camera. Viewers can almost smell the oil and sweat in the clothes of the sailors as they are seen running through cramped corridors. The dark ambiance and stunning contrasts between light and dark would satisfy any fan of Frank Miller’s cinematography. Warfare is never pleasant, and the reenactors portrayed in this episode gives viewers a chilling reminder of what submariners endured.

The episode centered around German U-boat Ace Kapitänleutnant Otto Kretschmer and his storied career as the commanding officer of U-99, a type VIIB U-boat and workhouse of the Kriegsmarine. Despite his limited career during the war, Kretschmer became the most successful U-boat commander of the Second World War, sinking 47 ships and over a quarter million tons of Allied war materiel. There is no mistaking why one naval historian on the program referred to Kretschmer’s “killer instinct” when it came to offensive submarine warfare: the tenacious leader believed in a “one shot, one ship” methodology. He and U-99 often stayed right to that guiding principle and raked in multiple kills in nearly all of her eight wartime patrols.

The series opens with the story of Kretschmer and U-99 on a solo mission south of Ireland on 8 July 1940. That evening, U-99 attacked ships of convoy HX 53, sinking the British merchant ship Humber Arm. It only took a short time for the hunter to become the hunted. In response to the attack, Royal Navy vessels attacked the submarine with depth charges, a primitive yet lethal device of anti-submarine warfare. The Flower-class corvettes, converted from commercial whale catchers, were dispatched to the sole purpose of sinking U-boats like Kretschmer’s. Each concussive blast beneath the water meant life or death for the German crew. The show’s producers did a masterful job telegraphing the pregnant moment for viewers. With little else to do in the water, the only viable option for U-99 was to ride the attack out. As the program pointed out, Kretschmer had a problem: the batteries keeping the ship powered underwater ran on limited time they already so desperately needed. Low on oxygen and out of options, Kretschmer remained calm and collected for his crew until they resurfaced nearly 12 hours later with no enemy fleet in sight. In all, 127 depth charges were dropped on U-99 by the HX53 escorts, with the ship coming out of it unscathed. His quit wit and calmness under pressure made him a name within the German Navy seemingly overnight.

German leadership back in Berlin knew their navy could not withstand this offensive onslaught alone, so Vizeadmiral Karl Dönitz decided to devise a new offensive strategy called “the Wolfpack,” where many U-boats banded together to strike convoys “like a vast driftnet of submarines.” With the fall of France, submarine bases in Lorient, Brest, St. Nazaire, and La Pallice made the disbursement of Wolfpacks even easier and most cost effective for fuel, leaving more time to hunt. The tactic proved immediately useful. Alongside his rival Joachim Schepke and U-100, German submariners managed to wreak havoc in the Atlantic in the late summer and early fall of 1940. At the end of September, Kretschmer and Schepke attacked convoy HX-72 headed for Liverpool. U-99 remarkably snuck through the convoy undetected on the surface. The impressive CGI graphics helped viewers understand just how bold and remarkable a strategy this was for the period. As one historian pundit explained, ASW technology of the day (ASDIC) was only beneficial for ships sailing beneath the waves, not on its surface. This new and daring tactic allowed Kretschmer to sink and destroy three ships from HX-72 with relative ease. His rival Schepke defeated seven during the engagement. The same surface submarine action was accomplished a month later against SC-7. The Wolfpack managed to sink twenty ships totaling nearly 80,000 gross register tons. Both U-boat commanders returned to Germany as national heroes. In a world at war, Kretschmer and Schepke were celebrities du jour in the Reich. With France in the hands of the Axis and the British Isles standing alone solely dependent on the convoys for supplies and war materiel, the situation seemed bleak for the Allies. 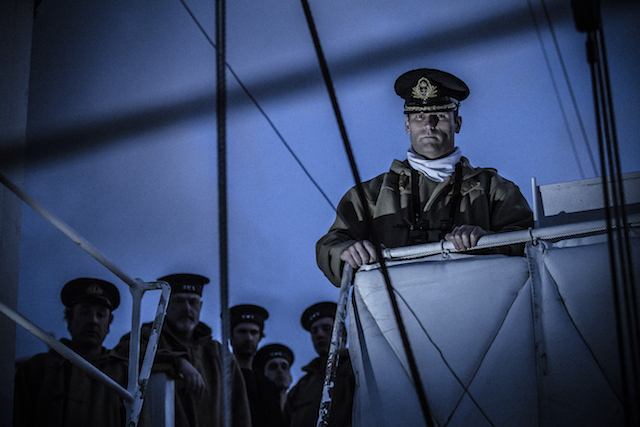 Royal Navy officials were desperate to find any way to stop the steady flow of convoy losses. Seeing the U-boat as a fundamental threat to the overall war effort, Britain decided to take vessels off the coast of the country and assign them to attack German submarines. They also began equipping some of their ships, including the Flower-class corvettes synonymous with the hunter-killer motif, with unidirectional radar capable of detecting enemy vessels below the waves or on the surface. The Royal Navy also had Captain Donald MacIntyre, a young and dogged surface warfare officer intent on killing U-boats as his sole purpose. By the time Kretschmer and Schepke were receiving accolades in Germany, MacIntyre was given the responsibility of becoming Senior Officer Escort (SOE). MacIntyre’s first action as SOE and his newly organized escort group would become one of the most famous U-boat battles of the Second World War.

Kretschmer and Schepke returned to the Wolfpack in February 1941 to search out new convoy targets. In March, they came across the North Atlantic convoy HX-112, including MacIntyre and his ship HMS Walker. Once again, U-99 sailed through the convoys defenses to attack, sinking four tankers and a freighter. Unfortunately for U-100, they were discovered by HMS Vanoc and was subsequently rammed and lost, killing Schepke and most of her crew in the process.

Walker and MacIntyre were able to spot U-99 using new radar technology and proceeded to depth charge it profusely. The attack forced Kretschmer to bring the ship to the surface where his crew surrendered, ending a reign of terror unprecedented in undersea warfare history. The loss of U-100 and capture of U-99’s crew became one of the most significant early victories for the British Navy in the war effort; one that gave them a better understanding of what would be required to quiet the demons from the hell below the Atlantic.

Smithsonian’s presentation of the story was well rounded, methodical, and kept the viewer both informed and entertained. The information included was enough to educate uninformed viewers without belittling the already informed. The episode’s actors, specifically the main character of Kretschmer, were expertly portrayed. He was also believable as that character, something often lacking in most period war documentaries. Thankfully, the production team was wise to shoot many of the scenes inside the submarine for authenticity.

With its unique blend of robust historical analysis, believable reenactors, biting contemporary footage, and stunning modern graphics, Hell Below is likely to become your favorite historical program of the summer. Ditch the garage sale pickers, ancient aliens, and storage shed hagglers this summer and enjoy a real historical program exploring the heroic tales of submariners and their war underneath the waves of World War II.

Matthew T. Eng is the Digital Content Developer at the Naval Historical Foundation. He also serves as the Digital Editor of the International Journal of Naval History and webmaster for the Society of Sponsors of the United States Navy.