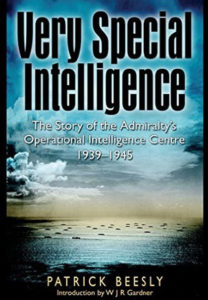 In June 1939, just before the outbreak of World War II in Europe, Patrick Beesly joined the Royal Navy as a Volunteer Reserve (RNVR) officer, became a Sub-Lieutenant (Special Branch), and was appointed to the Naval Intelligence Division (NID 2) in the section concentrating on France, Spain, and the Benelux countries. He subsequently became an Assistant to Lieutenant Commander (later Vice Admiral) Sir Norman Denning in the Operations Intelligence Centre, OIC in July 1940. Beesly’s initial assignment dealt with the activities of armed merchant raiders, but from 1941 until the end of the war with Germany, he worked on submarine tracking as Deputy to Commander Rodger Winn. He was promoted to Lieutenant Commander and acted as Intelligence Officer to the Commander in Chief, Germany, at Flesburg and Minden.

Former British Royal Air Force (RAF) officer Frederick W. Winterbotham’s popular, unauthorized account The Ultra Secret: The Inside Story of Operation Ultra, Bletchley Park and Enigma (Orion Books Ltd, and Harper and Row, 1974) was the first to disclose the Allied success in breaking the German high command ciphers during World War II, and ushered in a new facet of historical investigation — the study of intelligence and its impact on military operations and international politics. Although mainly focusing on the distribution of intelligence (it was his task as a Group Captain during the war), it had been written from memory and shown by subsequent authors, who had access to official archival records, to contain inaccuracies. Since then, many World War II archival documents have been declassified and become available at the U.S. National Archives and Records Administration or NARA (Record Group 457) and the British Public Records Office (Classes ADM, DEF, and HW).

As an RAF officer, Winterbotham was not in a position that permitted his access to the actual activities carried out at the Royal Navy’s OIC, but his book would open a flood gate of subsequent publications. Among these was Beesly’s authorized “insider” writings that appeared in three articles in The Naval Review, subsequently collected and enhanced in Very Special Intelligence (Hamish Hamilton Ltd, 1977), which sought to set the record straight, corrected errors, and provided documentation (given the materials declassified and available to him at that time).  The Operational Intelligence Centre was the “nerve center” of the British Admiralty in World War II, and dedicated to collecting, analyzing and disseminating information from all possible sources which would illuminate on the intentions and movements of German Kriegsmarine (naval and maritime forces).  The term “Very Special Intelligence” referred to the decrypted German messages intercepted and decoded at the Code and Cypher Centre located north of London at Bletchley Park. The Kriegsmarine, unlike the Luftwaffe, regularly changed code keys and even by war’s end, some naval cyphers were remained undecrypted.

This “new” edition of Very Special Intelligence (Seaforth Publishing, Barnsley, UK, 2015) is valuable, in the main, because of a 13-page “Introduction” by naval historian W. J. R. Gardner and 22-page “Afterword” by cryptographic historian Ralph Erskine.  They update Beesly’s original narrative and augment his 1974 text and expand the “Bibliography” to 104 entries.  Beesly (27 June 1913-16 August 1986) passed away nearly thirty years earlier and Gardner and Erskine’s more recent contributions were written in 2000 when the present volume was initially published as a reprint with the two new essays (Greenhill Books, 2000). Beesly also wrote Very Special Admiral: The Life of Admiral J. H. Godfrey CB (Hamish Hamilton, 1980) and Room 40: British Naval Intelligence, 1914-1918 (Hamish Hamilton, 1982). W. J. R. (Jock) Gardner is a historian in the Naval Historical Branch of Naval Staff of the Ministry of Defence where he has worked since 1994 following a naval career, specializing in antisubmarine warfare and intelligence. His interests are 20th century naval history and intelligence, and Gardner’s books include Decoding History: The Battle of Atlantic and Ultra (US Naval Institute Press, 2000) and The Evacuation from Dunkirk: ‘Operation Dynamo’, 26 May-June 1940 (Routledge, 2000).  Erskine and Michael Smith have written Action This Day: Bletchley Park, new ed. (Bantam, 2002) and most recently The Bletchley Park Codebreakers (Biteback, 2011).

In the “Introduction,” Gardner discusses three types of postwar historical volumes: 1) official histories of the events, 2) reminiscences of the participants, and 3) literature written from a background of considerable knowledge.  The first is exemplified by Stephen. W. Roskill’s The War at Sea, 3 vols.(HMSO, 1961) which deliberately omitted Ultra; the second by Ladislaw Fargo’s The Tenth Fleet (Obolensky, 1962), and Donald McLachan’s Room 39: Naval Intelligence in Action (Weidenfeld & Nicholson, 1968), and Winterbotham’s 1974 book; and the third by Beesly’s volume, F. H. Hinsley’s multi-volume British Intelligence in the Second World War (HMSO and Cambridge University Press,1979-1990), and David Kahn’s Seizing the Enigma (Houghton Mifflin, 1991). Gardner also comments that Beesly himself noted that because of Cold War security reasons, some of the most significant and useful OIC material did not survive into the postwar era. Correctly, Gardner noted that Beesly focuses on the Battle of the Atlantic and not the Mediterranean, Far East, or Pacific theaters of war.

Beesly begins with a chapter “Astute men” which is an overview of World War I naval intelligence when Room 40, a top secret British unit made significant strides in decoding German codes and war plans but was unable to put these findings into operational use. The Battle of Jutland is the classic example of this flaw; he elaborates this story in his 1982 book.  The initial twelve months in 1939-1940 were “lean times” for Allied codebreaking but significant strides were made from October 1940 to May 1941.  Beesly documents actions against the U-boats, but one of the more significant stories about the daring German plan – and British failure to intercept – is getting Scharnhorst, Gneisenau, and Prinz Eugen from Brest, France through the English Channel to Germany in 1942. The sinking of the Bismarck and Operation Paukenschlag (Drumbeat) are likewise recounted as is the story of Convoy PQ 17.  Some activities in the Indian Ocean are recounted, and the demise of Scharnhorst and Tirpitz are detailed.  The Battle of the Atlantic and its climax (January-May 1943 and June-December 1943) and Dönitz’ final attempts with the U-boats are recounted.

The “Epilogue” focuses on a number of important issues: 1) accounting for U-boats (every one of the 1,170 built from 1935-1945 have been accounted for and documented); 2) the importance of intelligence team efforts; and 3) the Admiralty. Beesly notes that the OIC acted as part of a highly coordinated maritime effort with Bletchley Park, Bomber Command, the Joint Intelligence Committee, and Special Operations Executive (SOE).  [Sidebar: The latter is the considered within Sir William Samuel Stephenson’s The Secret History of British Intelligence in the Americas, 1940-45 (Fromm International, 1999), see: Charles C. Kolb, H-NET REVIEWS/H-DIPLO (Diplomatic History), an electronic book review, 17 pp.  Published on 3 December 1999. www.h-net.org/reviews/showrev.php?id=3623 .]  In the Admiralty, Erskine details the operational functions and responsibilities of the OIC, the organization and composition of the Board of Admiralty and its responsibilities and relationships to the Naval Staff regarding ship allocations, and the Bomber, Fighter, and Coastal commands and the Navy’s Fleet Air Arm.

Erskine’s “Afterword: Codebreaking in the Battle of the Atlantic” reviews topics such as Ultra and the role of Bletchley Park’s cryptanalysis and Hensley’s important history before focusing on breaking the Kriegsmarine Naval Enigma (an explanation of the Enigma cypher machine, the valuable contributions of the Polish cryptologists, Alan Turing, and Gordon Welchman). Other SIGINT is also reviewed: HF-DF stations, TINA, AFH, American efforts in breaking Enigma (ECM MK II better known as SIGABA), and German success in February 1942 in breaking US Naval Cypher No. 3 dealing with convoy traffic. He also discusses Cyphers No. 4 and No. 5, and American contributions to SIGINT, notably the Purple cypher machine and breaking the Japanese JN-25 code.  German cypher security and their failures in codebreaking are attributed to their uncoordinated and fragmented efforts (p. 284).

In spite of its age and the two augmentations in 2000, this very well-written volume remains a classic in cryptologic history and the naval war during WW II.

Dr. Kolb is now an independent scholar (National Endowment for the Humanities, Ret.).