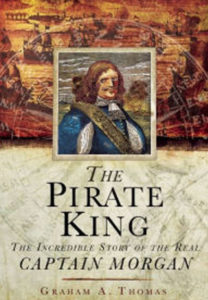 Henry Morgan was a “pirate” (the author used “pirate,” “buccaneer,” and “privateer” virtually interchangeably) whose rampages in the Caribbean and on the Spanish Main were the stuff of legends. Many authors, both contemporary to Morgan and modern, have written copious tales of buccaneers in the Caribbean, and more particularly, Henry Morgan. Thomas has rehashed most of them, offering little new or particularly insightful in this volume. It appeared to me that he did little research of his own, using (and crediting) others for their efforts to that end. I find the use of secondary and tertiary sources in a non-fiction account fraught with issues, some of which become perilous to the credibility of the author. From the bibliography, it would seem that the only primary source material investigated was available “on line,” specifically, British History Online, which Thomas credits in his acknowledgments. For the rest, Thomas used the previous books by Dudley Pope, Steven Talty, and Terry Breverton. One contemporary (to Morgan) writer, Alexander Esquemiling (also shown as “John”), is quoted often, while less often we see reference to a book (1740) by Charles Leslie, A New History of Jamaica.

The story of Henry Morgan is one that deserves more than a rehash of previous works. He was a larger than life character in the 17th century Caribbean and, it could be said, responsible for Jamaica remaining in British control. (While currently independent, Jamaica is still decidedly wearing her British heritage.) Morgan was loyal to his king, focused on the survival of Jamaica in the face of Spanish, French, and even Dutch threats, and, while surely lining his own coffers with plundered booty, always paid the mandated fair share to the Crown and the governor of Jamaica. He would have been not a pirate, but a privateer, always sailing under a commission or letter of marque from the governor, and always against the enemies of Jamaica. While one of the writers of contemporary accounts (Esquemiling) accused Morgan of barbarous acts of torture on prisoners, Thomas discounts them as an effort to discredit Morgan by someone not quite an admirer of the man. In point of fact, Thomas points out that Esquemeling, who sailed as surgeon on some of Morgan’s adventures, is known to have exaggerated these acts of barbarism. That observation comes from Dudley Pope, on whom Thomas relies most heavily for his information, opinions, and observations.

While Graham Thomas is known for his military non-fiction, much of it is centered on World War II and British aviation. He has two other books on pirates, one on Capt, Kidd and one on the pirates of Africa. These “pirate-oriented” efforts could perhaps explain his often labelling Morgan as a pirate. He is further not totally conversant with the nomenclature of the sea and ships, frequently mentioning “large guns” and “small guns” without reference to their size i.e. “sixteen pounders,” or “four pounders.”

Where Thomas does shine, however, is in the later chapters when Sir Henry “swallows the anchor” and assumes the role of lieutenant governor and governor of Jamaica, though he gives short shrift to Morgan’s knighthood, offering only a passing mention of it. Political rivalry has Morgan sent to England as a prisoner, but he ends up with a knighthood and assignment as lieutenant governor. His take on the political rivalries, back-stabbing, and pandering to the Crown are excellent, giving the reader a keen insight to the competition for recognition so distant from the “mother country.” Weak political sycophants are Morgan’s main rivals, and he “eats them alive” for the most part. Continual changes in the relationships between England and Spain, France, and the Dutch kept one constantly alert and untrusting when a foreign flagged ship hove into view from the lookout at Port Royal. Any treaties that were executed had to travel for several months before they could be implemented in Jamaica, and often were already out of date. Small wonder Morgan maintained his fleet of buccaneers in Port Royal; they were often the only protection the island had.

While a strong editor would have been of much help to this effort, likely removing such repetitive phrases as “we’ll look more closely into that in later chapters,” some of the contradictions, and some largely tautological instances, Thomas has produced a generally readable, though not terribly revealing, treatise on Sir Henry Morgan and his tenure in Jamaica. I, for one, would have enjoyed learning a bit about how Morgan came to be a leader of the “Brethren of the Coast.” All in all, I can only recommend this book to a reader with no previous knowledge of the subject.

White wrote this from his enclave at West Bay, Grand Cayman. An accomplished author of early 19th century historical fiction, his works can be found on www.seafiction.net .