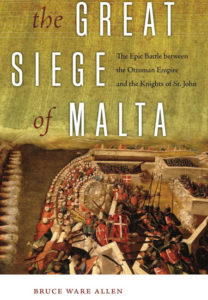 By Bruce Ware Allen, ForeEdge: An Imprint of the University Press of New England, NH, (2015)

On May 18, 1565, a Turkish fleet of 193 ships arrived off the arid, searing hot island of Malta, at the crossroads of the Mediterranean between Africa and Sicily. Its target was the Knights Hospitallers of St. John of Jerusalem, the last surviving remnant of the international orders of knighthood born during the Crusades. Over the centuries, the Knights had evolved from caring for the sick, to defending pilgrims, to a naval force, the most consistent and effective opponent to Ottoman Turkish control of the Med – and to the piracy of the North African corsairs, endemic over twelve centuries. The Turks expected a walkover. Their force, estimated at 35,000 to 48,000, included 15,000 Spahis and Janissaries – crack Ottoman imperial troops, the rest being corsairs and volunteers, Jihadis from around the Muslim world. Opposing them were 500 Knights, 2500 professional soldiers in their employ, and 3,000 men of the Maltese people, behind the walls of a handful of fortified positions. There they resisted bitterly throughout the summer, hoping for relief by a Spanish force being assembled in Sicily. Meanwhile, all of Europe held its breath; as Queen Elizabeth of England said: “If the Turks should prevail against the Isle of Malta, it is uncertain what might follow to the rest of Christendom.”

This battle had the potential to be a sweeping turning point of history away from the course we know – like Gettysburg or Midway. Instead, the Knights won, and this represented the high water mark of centuries of steady Turkish expansion that swallowed up the Eastern Roman empire and Europe from Greece to Hungary, reaching its climax under Suleiman the Magnificent, the Ottoman Empire’s greatest Sultan, who ruled from 1520 to 1566.  Bruce Allen’s “The Great Siege of Malta” tells, and tells brilliantly, how this victory was achieved. Allen is an independent scholar, and the book is a labor of love of many years. It is also a remarkable piece of scholarship, using original sources and modern scholarship in Latin, Spanish, French, Italian, German, and translations from Turkish and Arabic. He uses this knowledge to create a rich tapestry of the times, the place, the day-to-day development of the battle, the experience of the men involved. He does justice to the courage and sacrifice of both sides, and makes the situation so vivid and real one can taste it. Above all he gives a very perceptive and persuasive sense of what the leaders on both sides were planning and thinking during the battle, their tactics and leadership in this contest of wills. This is truly fine writing and fine history.

Of course, nothing is more conducive to great history than great sources. This was a highly literate age and numerous contemporary accounts are extant, in particular the personal journal of the siege by Francesco Balbi da Coreggio, soldier and participant, and the knights’ official historian of the siege, Giacomo Bosio. Ernle Bradford’s excellent “The Great Siege; Malta 1565” (1961) is based on his translation of Balbi, but Allen casts his net wider for sources and scholarship. The chief interest for the military historian is the question of how this particular magic trick is done, that of winning a defensive battle against apparently hopeless odds. A large part of the answer lies with the leadership and determination of Jean de Vallette, Grand Master of the Knights.

At the beginning, the Turks seemed to have everything in their favor, numbers, unlimited supplies, seasoned leaders, freedom of maneuver, and the tactical initiative. Spain was unlikely to intervene unless the Turks visibly faltered. And yet the Knights won – but how? They endured the heaviest artillery bombardment thus far in history (130,000 cannonballs) which reduced the walls of their forts to rubble, and endured repeated mass assaults. Yet they cost the Turks perhaps 35,000 casualties. (Turkish archives indicate 10,000 of the officially listed Turkish army troops – Spahis and Janissaries – were lost.) This is versus the loss of about 150 Knights, 800 of their soldiers, and about 2000 of the people of Malta. The Turks made some errors, but no individually disastrous ones. So what advantages did he Knights have? Essentially two things: themselves and a strong defensive position. The Knights were hardened by a lifetime as professional fighting men, sworn brothers defending their religion, fighting for the existence of their 542-year old Order. They were also, unlike the Turks, heavily armored. And Malta’s Grand Harbor was blocked by the small Fort St. Elmo, weak and flawed in design, but supported by forts St. Michael and St. Angelo further inside the harbor. St. Elmo had to be taken first, but the assaults on its walls had to be made under the covering fire of the heavy guns of St. Angelo. And essentially these men were motivated by something – call it the spirit of the last ditch defense – where there is absolutely no choice but to hold, endure, fight, and die if need be, buying time and perhaps life for your cause and your comrades.

An illuminating example of how leadership is an essential element in this situation is Allen’s description of the handling of an appeal from St. Elmo in the final stages of its reduction. Its defenders explained that its fall was inevitable, and begged to be allowed to abandon it and retreat to St. Angelo where they could fight on. De Vallette had to make it plain to them that what he needed was for them to buy as much time and Turkish casualties as they could – in short, to fight and die to the last man. He did so, in one of the most powerful moments of the book.

The Turks, of course, could afford to be prodigal with lives, and were. Repeated failures only increased their prodigality, as assault after assault and stratagem after stratagem failed, and they grew desperate to win before the summer campaigning season ran out. Sometimes the attacker has vast resources to expend, but wasting them on failure makes defeat into a disaster.  Military history provides many interesting parallels, for example the North Vietnamese assaults on the South Vietnamese strong points of Hue, Kontum, and An Loc during their 1972 Easter Offensive. This was a concerted effort to topple the S. Vietnamese government, and the loss of these positions would have made S. Vietnam strategically indefensible. The North assembled a massive force of infantry, artillery and armor – 200,000 men, the largest military offensive since the Chinese invasion of Korea in 1950 – to overwhelm the small and more poorly equipped garrisons of these positions. But during their armor and human-wave infantry assaults, the North Vietnamese were concentrated targets for US air power and naval gunfire, which cost them ruinous losses – much like the Turks at St. Elmo. Meanwhile the South Vietnamese troops held on, except at Quang Tri; it was the quality of their leadership that made the difference. The North lost over 100,000 casualties (plus about 750 tanks) versus about 35,000 for the South; like the Turks, the North was prepared to expend lives on massive scale to win, but failure turned these losses into a disaster, the beginning of a year of military and political setbacks. Of course, the North Vietnamese themselves held out, endured, rebuilt their forces, and came back three years later when the political situation had shifted in their favor. Suleiman the Magnificent likewise intended to return to Malta, but died in 1566, and under his less competent son Selim, the offensive was never renewed, and the balance of power shifted to the modernizing West, with its new mastery of oceanic trade and exploration.

It is the privilege of the reviewer to lecture the author on how to make a good book even better; and I think this one could benefit from a bit more explanation of some specific technical areas, such as infantry tactics in the pike-and-matchlock age, galleys and their tactics, and principles of fortification (in particular why the design of St. Elmo was flawed). The author talks about these things in the context of his narrative, but an occasional digression of a couple of brief analytical paragraphs to make these things clear would be useful to the newcomer to 16th century warfare. I personally also think the book would benefit from a few pages that explicitly answer the questions of: “Who were these Turks? And why were they so much to be feared?” A phenomenon in history, these tough and warlike nomads from the Central Asian steppe, recent converts to Islam, flooded into the declining Arab world around 1000 AD and revitalized its efficiency and aggression. Their target was the Eastern Roman Empire, which had resisted Arab aggression for centuries, and by the 12th century they had taken Anatolia (the Crusades were intended to resist this), and in 1354 they crossed into Europe, and quickly conquered much of the Balkans, reducing Byzantium to little more than the city of Constantinople itself – still a great metropolis and powerful fortress. But in 1453, the Turks used the new weapon of powerful artillery to breach its great walls, bringing some 2300 years of Roman history to an end. This was followed by Suleiman’s conquest of Serbia and Hungary and unsuccessful sieges of Vienna in 1529 and 1532. This check in central Europe and his success in driving the Knights from their earlier stronghold at Rhodes in 1522 led him to expand into the Mediterranean with naval support for the resurgent North African corsairs – as well as fighting the Portuguese for control of the Indian Ocean and invading Christian Ethiopia, Persia, and the Caucasus.

By the 1500’s, the Ottoman Empire was geographically vast, containing 20 to 30 million people, and waging a true world war against its fragmented opponents. It represented a remarkable combination of a largely European successor state to the Byzantine Empire, plus the Islamic Caliphate established by Mohammed’s successors stretching from Morocco to Mesopotamia. Its genius lay in developing unique institutions to simultaneously conquer and exploit its European subjects, while establishing its influence and authority over the Muslim world. Key to its organization for war and expansion was the institution of the Sultanate itself, which provided a centralized, undivided, and absolute military command.  It had many unusual features, such as the “devshirme” or child tax, which obliged all Christian households in the Empire to contribute a son at ten-year intervals. These boys became slaves of the Sultan and were taken to Constantinople to be trained as soldiers – the Janissaries – or educated to fill most positions up to the highest in his government.

What would the fate of Europe had been, if Malta and/or Vienna had fallen, followed by the invasion of central Europe, Italy, and still-Muslim southern Spain (which revolted with Ottoman support in 1568). A united Christendom, fighting with its back to the wall? Not likely; the probable result would have been a divided and dependent Europe, its cultural Renaissance and oceanic expansion short-circuited by the struggle for survival. Mr. Allen tells us how France had already begun its long anti-Hapsburg alliance with Turkey in 1525, cooperating with them in military operations and permitting a corsair fleet to base at Marseille and Toulon in 1543-1544, from which it raided Spain and Italy. Well – the first rule of politics is “the enemy of my enemy is my friend”, and who they are is less important than who looks like winning.

This book offers many excellent things: it’s a gripping read, and its scholarship opens a window onto a fascinating world. It provides deep insights into the nature of war and battle – or perhaps one should say into human nature – as well as providing some very thought-provoking parallels with today’s geopolitical situation. Highly recommended to all readers.