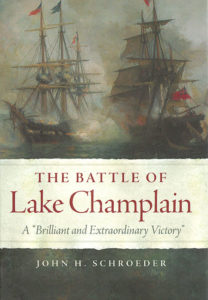 Like the Korean Conflict, the War of 1812 is often glanced over in many American history survey courses, which is too bad because one of the most significant naval battles in American history occurred near the end of the war on Lake Champlain. John H. Schroeder provides a wonderful, thorough, and easily read volume on the significance of the battle fought just off Plattsburgh, New York’s shores in September 1814. Offering far more than a description of the blow-by-blow conflict between United States Navy Commander Thomas Macdonough’s four warships and ten gunboats and Royal Navy Captain George Downie’s four warships and eleven gunboats, Schroeder deftly demonstrates the importance of the battle and its impact on the negotiations at Ghent, Belgium. Using archival materials and excellent primary sources, the author also looked at the classic histories of the War of 1812, including Reginald Horsman’s The War of 1812 (1969).  The book contains excellent illustrations, four detailed maps, and a table of the naval squadrons at the battle.

Putting the battle into the broader context of the British-American conflict, the author explained how the British hoped to win concessions from the United States, such as redrawing the border between the United States and Canada and a buffer between the Americans and the Native Americans loyal to the British. Particularly excellent is the balance that the author used in his approach to writing military history. Schroeder divided the book into the diplomatic and political reasons for the conflict, the military strategies used by the two sides during the war, and an account of the naval battle at Cumberland Bay. Schroeder did not ignore the army side of the conflict and well described the efforts of Brigadier General Alexander Macomb’s 1,800 man army against Sir George Prevost and the 8,000 members of his group, including 2,600 men who had fought with the Duke of Wellington against Napoleon.

While the naval battle lasted only two and a half hours and involved Macdonough winding his flagship, Saratoga, Schroeder explained the strengths of the commanders and the vessels for both navies that fought on September 11. The British commanders in the Navy and Army largely had superior qualifications to the young and relatively inexperienced men who commanded the American Army and Navy. Schroeder explained that the Americans won because of both skill and luck. For example, while both Captain Downie and Commander Macdonough had served in their respective navies since the 1790s, Downie’s experience included commands during the war with Napoleon, while Macdonough had never commanded in a battle prior to Lake Champlain, although he had served in the Barbary Wars and in the Quasi-War. Macdonough and Macomb got along well and cooperated with one another, as demonstrated when Macomb sent some of his men to help crew Macdonough’s undermanned vessels. On the other side, Prevost and Downie had only met briefly before Downie took command of the British squadron just before the battle and neither assisted the other prior to the conflict. Downie’s HMS Confiance carried 37 guns, including 27 24-pound long guns that functioned best at a range of more than 1,000 yards, while Macdonough’s USS Saratoga carried only 26 guns with only 8 of them being 24-pounders. While the British had greater firepower, Macdonough’s group had the advantage because he forced Downie to fight at close range as the Americans had lined up their ships close to Plattsburgh’s shore in Cumberland Bay, making Downie’s 24-pounders ineffective.  In another turn of bad luck for the British, Captain Downie died instantly just after the start of the battle when a shot from Macdonough’s flagship knocked a British gun off its carriage hitting Downie. After that, the British officers failed to act in a unified fashion in their attacks on the U.S. Navy. While the conflict also involved a land assault on Plattsburgh, Prevost had poorly planned for the battle and choose to retreat as soon as he heard of the Royal Navy’s defeat.

The results of the battle took only a few days to get to New York City and Boston, but four weeks to travel to London and five to Ghent. The American victory restored confidence in Madison’s administration, kept New England in the United States, and brought great praise to Macdonough and Macomb. In Ghent, the British negotiators had expected a total victory, but upon hearing of the loss at Lake Champlain, the British quickly dropped demands for redrawing the United States/Canada borders, as well as dropping the idea of an Indian buffer zone. Even though American losses continued after the Battle of Lake Champlain and Plattsburgh, Macdonough’s victory was the turning point in the war and ultimately in American history.

Schroeder convincingly argued that the United States Navy and Army cooperated better, fought better, and communicated better than their counterparts resulting in a significant victory for the United States. People interested in naval history will be well rewarded for reading this book.