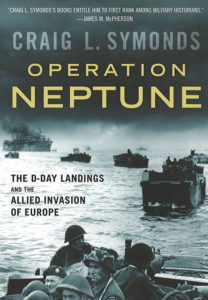 Professor Symonds has done it again! This splendid book starts with the assertion, “During World War II, a dearth of shipping was the key logistical constraint in Allied decision making and because of it, the most important Anglo-American decisions of the war were less a product of what they wanted to do than of what they could do.”  From there, he justifies his proposition describing the strategic debates and tactical operations that led to the Normandy invasion in June 1944. He makes the case that the LSTs were the most important ships of the war; detailing occasions in which assignment and allocations of these vessels were a major subject in conferences of heads of state.

Symonds begins his history sketching the European war before Pearl Harbor then continues with increasing details until the fall of Cherbourg in July 1944. Two facets of his easy to read narrative stand out – people and ships. No historian since Samuel Eliot Morison exhibits as competent a grasp of the sea and operations on it. His profiles of individuals from admirals to boatswain’s mates are depictions of character and personality. Those who have served at sea can easily recognize and appreciate the personalities and foibles of the main characters in this under-recorded aspect of World War II.

Most exciting are his detailed descriptions of the not well known destroyers’ action at Omaha Beach. With the landing force pinned below the cliffs, two destroyers independently closed the beach to open direct fire on the German positions. Sensing the crisis, their squadron commander led five others into shallows to hammer German fortifications, to open the beach exits and to rescue the landing force. Here were ships operating at good speed with no more than a foot or two of water under keel while firing every gun, including some small arms. This chapter alone is worth many times the price of the book and will inspire every seaman who reads it.

Professor Symonds continues his highly regarded career as a recorder of American naval history. Operation Neptune is his best yet and belongs in the library of every veteran of the Navy, Coast Guard and merchant service.

Rear Admiral Holland is a former Vice President with the Naval Historical Foundation.