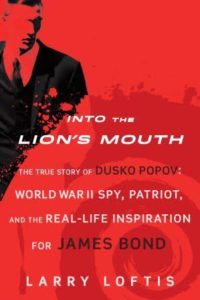 Lawyer and author Larry Loftis accomplishes three things in his new book Into the Lion’s Mouth: The True Story of Dusko Popov: World War II Spy, Patriot, and the Real-Life Inspiration for James Bond. He does an excellent job in documenting – virtually day by day — the activities of double-agent Duŝan Popov in World War II, the center of the legendary TRICYCLE network of supposed German spies really working for Britain. Loftis accomplishes this via the outstanding integration of memoirs and archival material. Second, he advances the view that Popov was the role model for James Bond. He builds this case on evidence that, even if well documented with archival sources, in the end inevitably remains circumstantial. Thus, he ably reaffirms Popov position on the list of individuals (at least 15 by one count) who are claimed to have served as inspiration for Ian Fleming’s character of James Bond. Third, and of specific interest to naval historians, he renews an argument introduced in the 1980s about Popov, German intelligence, missed warnings and Pearl Harbor.

In this third area he provides near-definitive evidence of two major findings. The first, demonstrated with impressive use of archival sources, is that agent Popov provided information that the Germans were interested in Pearl Harbor to FBI Director J. Edgar Hoover in August 1941. This centers on a questionnaire from the German Abwehr, about one-third of which involves a request for intelligence regarding the defenses (including against torpedo attack) at Pearl Harbor. His second finding, again backed by impressive evidence, is that Hoover neglected to send this intelligence on to FDR or other officials, for whatever reason. These arguments have been raised before, as Loftis himself clearly indicates, but this latest work is almost certainly the most compelling summary to date.

The naval historian hopes ultimately for additional evidence that, had Hoover forwarded Popov’s evidence of German interest in Pearl Harbor, it might have made a difference in preparing the U.S. for the attack and could have shaped the outcome of events in 1941. Of course, it is dangerous to try to prove any counterfactual, and perhaps wisely Loftis does not go there. Instead, Loftis implies, but does not state, that this information, nine months after the successful British attack at Taranto in November 1940, would have sufficed to alert the U.S. Navy to the danger of an impending Japanese attack.

Loftis has prepared the ground for others to deepen this line of inquiry. For example, the U.S. Navy was well aware of the attack at Taranto and implications for Pearl Harbor but generally believed in error that the shallow waters at Pearl Harbor ruled out such an attack there. Would the Popov information have changed that view? At the time, the Japanese consulate in Honolulu was able to gather much of the intelligence requested on the questionnaire on its own by direct observation, and indeed was busy doing so. Would this German questionnaire itself force the Americans to conclude that the Japanese were suddenly keen to gather information on Pearl Harbor? U.S. analysts and leaders certainly were aware of the potential for conflict with the Japanese, but didn’t put Pearl Harbor high on the list of targets. Would this questionnaire have redirected their attention, or were similar intelligence inquiries being directed against the Philippines, Australia, India, Guam or other potential targets?

Stylistically, the book is a pleasant and interesting read, though one filled with tremendous detail that some will skip over. This reader wished the author would not switch back and forth continuously between code names (e.g., DREADNOUGHT), first names (Ivo) and last names (Popov) when identifying the many players in the book, often done within the same paragraph. It forces the reader to cycle back and forth between the content and the very helpful guide to “who’s who” provided at the front. Finally, regardless of whether an error originates in the source material or with the author, a correction in the footnotes would be appreciated. For example, HMS Queen Elizabeth was a battleship, not a submarine.

In the end, the lack of full resolution by Loftis of the Pearl Harbor issue, which encompasses perhaps only 10% of his book, shouldn’t detract from his broader mission: the excellent integration of primary and archival sources to document ably the workings of the TRICYCLE intelligence network in World War II. It is highly readable book and an excellent introduction into challenges in living the life of a double agent.

Marty Bollinger is the Vice President of the Naval Historical Foundation.