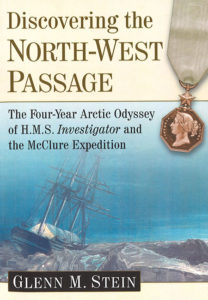 Most people who are only slightly familiar with the history of the high-latitudes will know the story of John Franklin’s Lost Expedition searching for the North-West Passage (1845), as well as of Roald Amundsen’s first transit through the passage during his 1903-1906 expedition with the Gjøa. In comparison to these two well-known expeditions, Robert McClure’s expedition with HMS Investigator (1850-1854) is nearly forgotten, known only to those with a special interest in Arctic history.

Polar historian Glenn M. Stein’s new book Discovering the North-West Passage brings not only the story of McClure’s expedition to the light, but provides a meticulously researched account of the expedition based on a wide variety of primary and secondary sources and highlights that it actually was McClure, not Amundsen, who completed the first transit of the North-West passage. Of course, Amundsen was the first who completed the transit all the way on a ship, while McClure and his men travelled the central section on foot after the loss of HMS Investigator.

While McClure and his men had failed to achieve a complete transit by ship, they established the existence of a North-West Passage during one of their sledge journeys in the late Summer/early Fall of 1850 when they observed a strait between Banks Island and Melville Island. Thus, they provided the needed knowledge that enabled the first successful passage by ship a half a century later.

Stein’s book deserves credit for bringing the story of the McClure expedition to center stage and pointing out that the great names of the heroic age of polar research built their accomplishments on previous knowledge. The history of the Northwest-Passage is much more complex than just Franklin’s Lost Expedition and Amundsen’s success.

One of the largest challenges for any polar historian dealing with the exploration of the Arctic in the Victorian period is the limited number of first-hand accounts. Reconstructing the history of a journey like the HMS Investigator is a major challenge, which Stein mastered extremely well. Beyond providing the factual history of the expedition, his book sheds light on the tensions among crew-members and provides an extremely detailed insight into the microcosm to be found on any expedition ship operating for extended periods of time in remote areas. Organized chronologically, the book provides a readable account of the complex history of the expedition, yet never fails to discuss topics in analytical detail. Stein’s main tool for reaching high scholarly quality and maintaining readability are the appendices that allow him not to overburden his main narrative for the casual reader while providing the details for the scholar.

For example: In Appendix 2, Stein provides an extremely detailed discussion of the few diaries and journals available for research on the McClure expedition, a most useful tool for future polar history research and a best-practice example of how such materials can be successfully integrated into such a research project.

Indeed, some of the seven appendices might be of equal relevance for polar history research than the main text of the book.  For example, Appendix 3 isn’t just the standard crew list to be found in many books about the history of Arctic exploration, but a set of well researched short biographies that allows to reconstruct the social fabric onboard the ship and to understand that some of the conflicts between the members of the crew and McClure actually could be expected even prior to the HMS Investigator even setting sail, in particular when realizing that a small portion of the crew had substantial Arctic experience, while most crewmembers including some of the officers had no Arctic experience at all.

Appendix 5 details the various sled parties and Appendix 7 discusses the history of the creation of the Arctic Medal as a story that is nearly as complex and interesting than the story of the expedition itself – at least for any historian interested in phaleristics.

Published by McFarland, the book is of the usual high technical quality to be expected. A good number of contemporary illustrations will help the casual reader as well as the specialist to get a better grip of the topic and to develop a feeling for polar research during the Victorian era. While there are a number of charts included in the book, mainly contemporary area maps, a map showcasing the whole area and the whole expedition is unfortunately missing. For the reader familiar with the Arctic this might not be a big deal, but for any other reader, such a map would have been a most helpful tool to understand the complex geographic setting of the historical events discussed in the book. Adding such a map should not have required too much effort by the publisher.

Altogether the book is a most welcome addition to the literature about early polar exploration, regardless if for the specialists in the field of polar history or for a naval historian interested in the Arctic activities of the Royal Navy or even for a more casual reader interested in another story besides John Franklin’s lost expedition. In addition, with the North-West Passage as well as other Arctic Routes having gained increased public attention throughout the last years and today even cruise ships transiting through the North-West Passage on a more or less regular base, Stein provides a most welcome and enjoyable historical background story that also needs to be recommended to all those debating the legal status of the Northwest-Passage today.