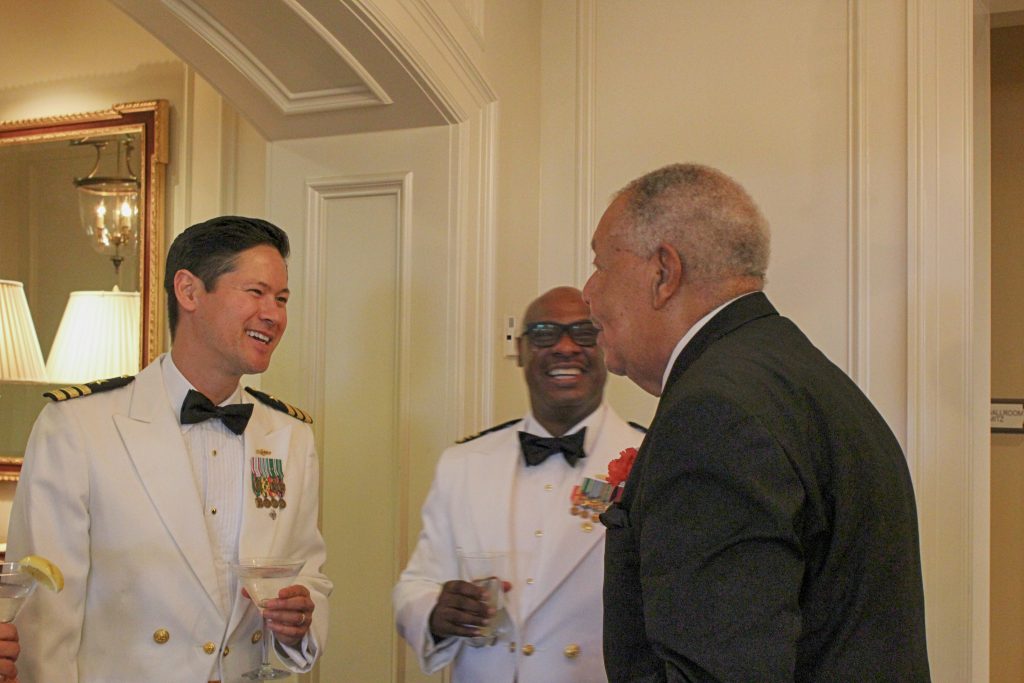 This year marked the 74th anniversary of the Battle of Midway, one of the most pivotal events of the Second World War. VIPs, invited guests, active duty military, and veterans once again braved foul weather to attend the annual Battle of Midway Celebration Dinner at the Army Navy Country Club in Arlington, VA.

This was the 16th year that Navy organizations came together to honor and commemorate those who fought in the historic event so many years ago. In 1999, then Chief of Naval Operations Admiral Jay Johnson sent a message to the Navy to commemorate both the 13 October Navy Birthday and the 4-7 June Battle of Midway. Organizers quickly banded together to help make the commemorative occasion a fitting testament to the honor, courage, and commitment of an outgunned and outnumbered American fleet displayed that would eventually turn the tide of the war. Years later, Navy commands around the world continue to gather each year to remember the service and sacrifice of Midway sailors in what Admiral Chester W. Nimitz called, “a glorious page in our history.” The dinner itself has grown since then to become an annual hallmark within the academic, military, and veteran communities in the Washington, D.C. metro area.

The real honored guests were the Midway veterans, all in their 90s. Thankfully, five veterans, all of which have previously attended Battle of Midway Commemoration Dinners in the past, were able to attend. Guests were more than honored with their presence, with each individually recognized amidst a roar of thunderous applause. Junior officers and Sailors flocked by their sides before the official program began to hear their stories of service and sacrifice. These types of interactions are important to the development of our young officers and Sailors as they begin their own careers in leadership. The five Battle of Midway veterans present were (seated L to R): 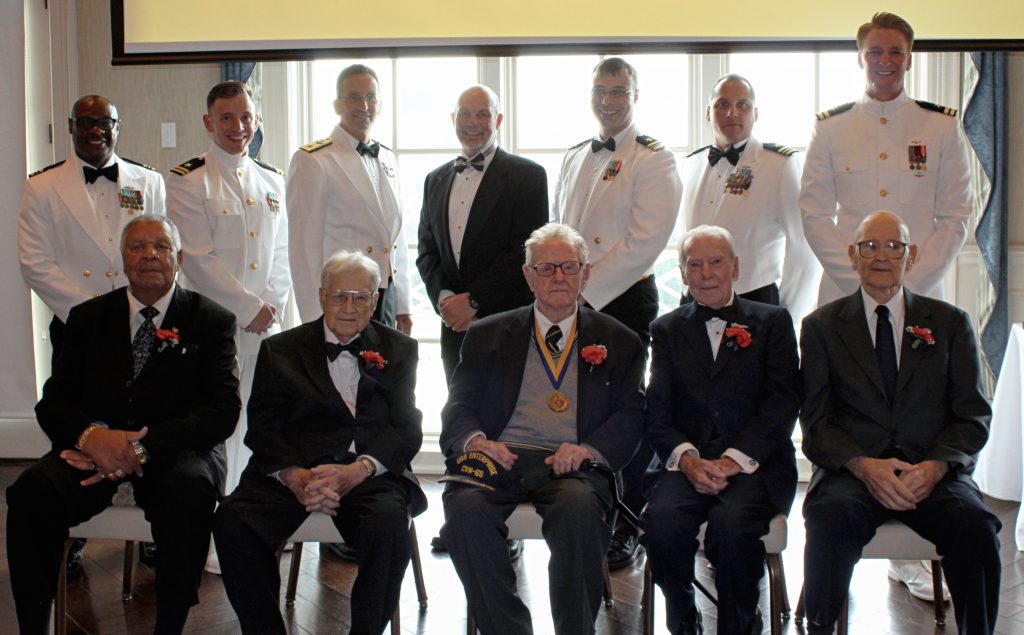 Although never a guest at the Washington, D.C., dinner, the committee felt it appropriate to also remember Captain Jack “Dusty” Kleiss during the introductions. Kleiss passed away in April this year at the age of 100. He was the last surviving SBD Dive Bomber from Midway. As a member of USS Enterprise’s VS-6 “Scouting Six,” he earned the Navy Cross for scoring hits on the Japanese carriers Kaga and Hiryu on 4 June, as well as the Japanese cruiser Mikuma on 6 June. In honor of Captain Kleiss and his heroic actions, the Naval Historical Foundation produced a brief video commemorating Kleiss. The video was produced in coordination with Kleiss biographers Dr. Timothy and Laura Orr and our partners at the Hampton Roads Naval Museum in Norfolk, Va.

Before the dinner  began, International Midway Memorial Foundation (IMMF) President and Founder Dr. Jim D’Angelo made a special presentation to speaker David Jourdan and Dr. Jim Delgado, who is the Director of the Maritime Heritage Program at NOAA’s Office of National Marine Sanctuaries. For their tireless work preserving the memory of the Battle of Midway D’Angelo presented Jourdan and Delgado with National Midway Memorial coins.

The Search for the Japanese Fleet 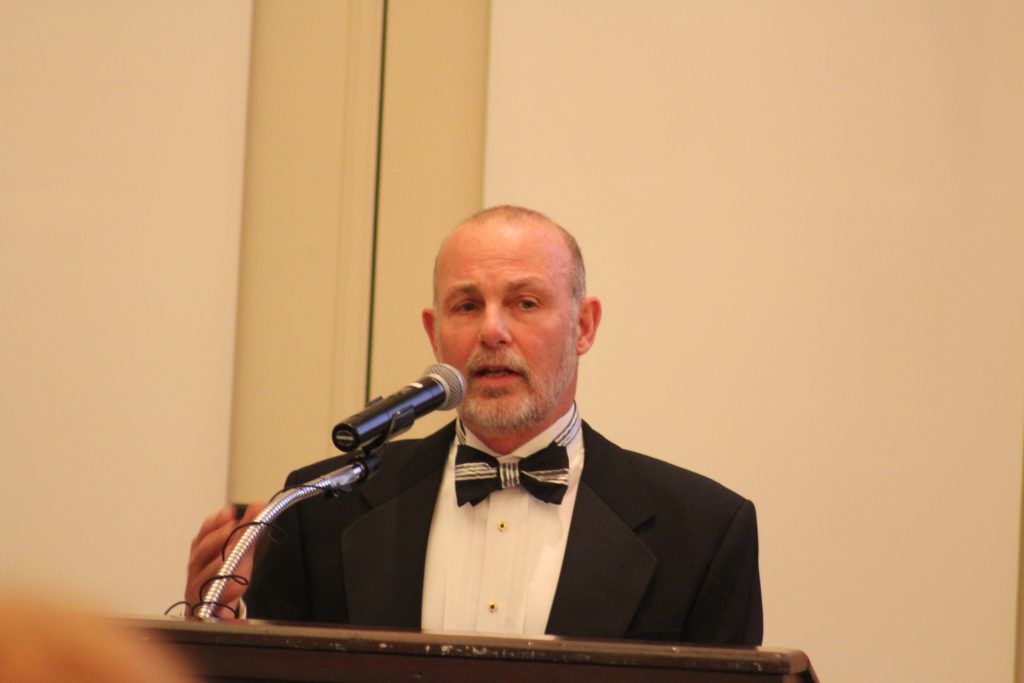 Marine explorer and author David Jourdan rounded off the evening’s festivities with his talk, “The Search for the Japanese Fleet.” This year’s lecture built on the intelligence theme of last year’s event, which Jourdan admitted was a “significant part of the story.” Using his knowledge as an underwater explorer and researcher, Jourdan based his informative talk on his 2015 book of the same name. Jourdan has become an expert on the battle and the heroic exploits of submarine USS Nautilus. His resume is fitting. A 1976 Naval Academy Graduate and career submariner, Jourdan is best known as the President and Founder of Nauticos, a company devoted to the exploration of the deep ocean.

Jourdan used his expertise as an engineer and physicist to show the audience a different perspective of the battle – the silent war that raged beneath the water. Jourdan masterfully set the stage for the conflict, explaining why Nautilus’s participation, albeit overshadowed by the heroic actions of the carrier fleet, was nonetheless critical to the overall success of the battle. These submarines, crammed with nearly 100 men working in a space “no larger than a four-bedroom house,” had the will and determination to detect and engage the Japanese fleet which outgunned and outnumbered the American Navy.  Nautilus takes precedence here, due in large part to her then-commanding officer, Lieutenant Commander William H. Brockman, Jr. He operated the submarine aggressively over the course of the battle, including counterattacking the Japanese destroyer Arashi, which, as she sped back to rejoin the main Japanese attack force, led the still-searching American aviators (led by USS Enterprise VB-6 Air Group Commander Lieutenant Commander Wade McClusky) straight to the heart of the Japanese fleet:

“Then he saw a Japanese destroyer the Arashi. The Arashi had been left to finish off the Nautilus and at some point it had been called back to the fleet and had headed in a bee-line for the fleet. McClusky followed it and lined up their planes. They were soon rewarded by masts on the horizon.”

The rest, as they say, is history. Their aviators were able to put an end to the carriers Kaga and Akagi, both of which played a heavy hand in the attack at Pearl Harbor just six months before. Both McClusky and Brockman received the Navy Cross for their actions at Midway. 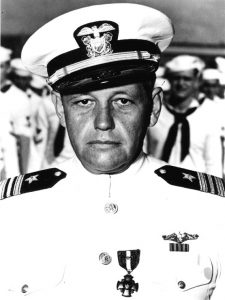 The most interest aspect of Jourdan’s lecture was his discussion of the effect of depth charges aboard USS Nautilus during the Battle of Midway. Over the course of the battle, Nautilus experienced 42 such charges, all of which came during their very first war patrol and first engagement. These weapons, which Jourdan noted were the “most dangerous enemy” of the submarine, had the potential to cause the swift destruction of a submarine from the power of the hydraulic shockwave it produced.

Most of the depth charges Nautilus experienced came from the IJN Arashi. Using his background and knowledge of physics, Jourdan accurately explained the science behind depth charges. Jourdan could only comment in hindsight after talking to a few veterans that it must have been truly “an awful experience:”

“When a depth charge explodes, it creates a bubble of gas and a million pounds of pressure in that little bubble. This creates a shockwave, meaning the water was moved so fast that it propagates a lot of energy away from that explosion faster than the speed of sound. When that hit the ship, you would hear a click or ping like a hammer blow on the hull, and you would feel it. The next thing that happened is the deafening blast that moved to you at the speed of sound. Quite often that bubble would collapse and rebound and you’d have multiple reverberations.”

In the end, all you could really do is sit and stare at your shoes and hope you’d make it through it. As Jourdan said, “you didn’t want to see another man’s fear in his eyes.” Unlike most historians, Jourdan does not feel that luck played a key factor in the victory at Midway. To him, it was more a case of relentless brave attacks by American airmen and submariners on the fleet that caused the Japanese to be out of balance and without time to retaliate.

He ended his talk with a brief overview of the 1999 exploration Nauticos conducted in coordination with the U.S. Naval Oceanographic Office to search for the lost Japanese aircraft carriers.

By reconstructing the Nautilus patrol through their meticulous notes and deck logs, they were able to positively identify wreckage from the Japanese carrier Kaga using deep-tow sonar devices. Because Brockman had attacked that ship, Jourdan and Nauticos knew exactly where to search. Like Dr. Bob Ballard and the Ocean Exploration Trust, Jourdan’s myriad contributions to the field of underwater archaeology today are a reminder that the understanding and exploration of the Navy’s past is as important as it ever was. As we begin to celebrate and commemorate the 75th anniversary of the Second World War later this year, these contributions will not go unnoticed. Stay tuned to the Naval Historical Foundation for updates.

Looking to the 75th Anniversary