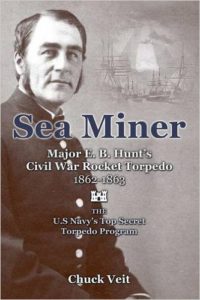 Chuck Veit is something of a master in recreating the world of Civil War America and the personality of real individuals of that time through contemporary newspapers, letters, speeches, and diaries. In The Yankee Expedition to Sevastopol, he did a remarkable job of bringing salvor, inventor, and self-taught engineer John Gowen to life. In Sea Miner, he takes aim at a potentially even more interesting character, Major Edward B. Hunt. Graduating second in his 1841 West Point class, Hunt was a member of the Army Corps of Engineers and a husband of the poet and advocate for the American Indian, Helen Hunt Jackson. He was also an accomplished mathematician and physicist, with many written contributions to scientific journals, as well as the professional literature of Army engineering. While in command of the construction of Fort Taylor at Key West in 1862, he submitted a proposal to Navy Secretary Gideon Welles for a new weapon he called “Sea Miner,” promising it “will totally revolutionize sea warfare and become our main resource for defense.” Sort of a predecessor to the self-propelled torpedo, it was a rocket launched from an underwater tube, intended to travel under water and penetrate the hull of an enemy ship below the waterline. Welles was obviously sufficiently impressed to meet with Hunt and then authorize him to construct and test his weapon at the Brooklyn Navy Yard.

Throughout history, ships have often proved very difficult to sink with gunfire. In the age of sail, ship duels typically ended with boarding and capture, not sinking. During World War II, we have the cases of the Bismarck and the Hiei, battered to bits by enemy shellfire but still floating. This resistance to gunfire damage was greatest at mid-19th century with the invention of the armor clad warship, as the 1862 fight between the Monitor and the Virginia or the 1866 Battle of Lissa showed. In both cases, ironclads pummeled each other for hours without doing much damage. Significantly, the most valuable ironclad actually sunk at Lissa was due to ramming; the solution to sinking a warship outright was breaching the watertight integrity of its hull. During the Civil War, stationary “torpedoes” or mines, and spar torpedoes employed by steam launches and primitive submarines, as well as ramming vessels, were developed for this. They had occasional successes, as did the “automobile” torpedo later in the 19th century. However, mechanical delicacy, inaccuracy, short range, low speed, and the vulnerability of the torpedo boat to gunfire made them largely ineffective against a warship under way and defending itself on the open sea, at least until the 20th century.

Would the Sea Miner have worked any better? Would it have worked at all? Indeed, how was it supposed to work? Plainly, Hunt was a man of the highest intelligence and character for Welles to give him his immediate full support, but did he grasp the details necessary to turn his idea into a practical weapon?

At this point Veit’s research runs into several serious roadblocks. The first is that Hunt left behind almost nothing of a description of his ideas, his invention, and his own process of conceiving and working it out – no notes, diaries, detailed explanations in letters. We know more about his invention (and personality) from the recollections of his wife and associates than from the man himself. Next, the secrecy of the project meant that “all plans were destroyed as soon as they had served their purpose. Veit had to use careful detective work to reconstruct what the Sea Miner actually was, and the gaps in factual knowledge had to be bridged with conjecture. For example, Veit created his own equipment, a “balancing board”, to model and understand Hunt’s ingenious device for maintaining the rocket’s center of gravity as its fuel was consumed.

The first test of Sea Miner ended in failure and the end of the project – an oversight led to an explosion and Hunt’s death. But would it have worked anyway? I believe Veit mistakenly extrapolates from data for early Whitehead torpedoes to obtain a very misleading estimate of the range, speed, and penetrating power of Hunt’s rocket torpedo. “If we apply the simple ratio of one horsepower to two knots from the Whitehead to Hunt’s final 12-inch torpedo, the result is an incredible 1,520 knots (1748 mph) – a number that beggars belief.” But if I (another amateur) am correct, doesn’t surface friction drag rise exponentially, at the square of the velocity, and so speed and range would be much less?

As a writer on naval technology, I understand how easy it is to be tripped up by my own incomplete understanding of engineering. In our defense, most scientists never tell their own stories, but depend on us historians and wordsmiths to do so. (And the problem works both ways; scientists often commit similar howlers when pronouncing on subjects such as history or philosophy of which they know little.) But could it be that Veit isn’t aware of this because Maj. Hunt wasn’t either? Serious study of ship hull resistance seems to have begun with William Froude about 1861, who began towing models and constructing the first towing tank facility in the late 1860’s. So it seems quite possible that Hunt wouldn’t have appreciated the problem. Capt. Cowper Coles, the inventor of a revolving gun turret, designed the HMS Captain, laid down in 1867, to combine the fighting qualities of a low-freeboard turret ship with the seagoing endurance of a full rig of masts and sails. He apparently ignored Froude’s work on the effects of hull form on stability published in 1861, and indeed, Captain capsized in a gale in 1870. This was a period when the engineering imagination often preceded the science necessary to explain it; engineering often proceeded by empirical trial and error, and disastrous failures were not uncommon, in an age when the confidence in the power of technology to solve any problem seemed unlimited.

This book contains many good things. The guided tour Veit gives us of the Brooklyn Navy Yard in 1862 is well worth the price of admission – its workshops, docks, ships under construction and repair, as well as the crowd of gawkers, newspapermen, and potential foreign spies who were free to enter and poke their noses into just about anything that was going on there. But as a story, this book is rather disappointing; Sea Miner remains at the conclusion still incomplete, little understood, and probably ill-conceived. Still, researchers in the field of early underwater weapons should be aware of Hunt and his work. Veit provides a valuable contribution also by summarizing in good detail the work of a number of Hunt’s contemporaries who pursued similar concepts of underwater rockets and guns. Like Sea Miner, their purpose was fore sighted, to provide a simple and easily produced device to serve the tactical function of the torpedo, in the period before the successful but mechanically complex Whitehead torpedo was developed.

Robert P. Largess is the author of USS Albacore; Forerunner of the Future and articles on the USS Triton, the SS United States, the development of the towed sonar array, and the History of Lighter-Than-Air.