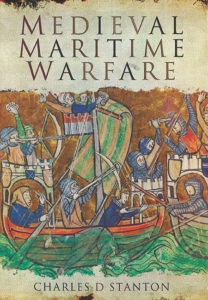 As a former US naval officer and airline pilot whose research has been in medieval Mediterranean history, Charles Stanton is well equipped to undertake the task of writing a comprehensive introduction to medieval naval warfare. With several well-received articles in scholarly journals about the Norman conquest of Sicily and Southern Italy and a previous book on Norman naval operations in the Mediterranean, this book represents an expansion of his areas of published expertise. At 292 pages of text, followed by extensive scholarly footnotes and a thoughtful selected bibliography that ought to encourage further reading in the subject for interested readers, Stanton demonstrates his knowledge of existing research into specific aspects of medieval maritime history while providing an overall study that ought to encourage further research in the field.

The book itself is organized geographically, with a short introduction about the transition between Roman and Medieval naval history, and with ten chapters divided slightly unequally between Southern Europe (the Mediterranean and Black Sea) and Northern Europe (the North Sea, Baltic Sea, and English Channel). While examining the history of medieval naval warfare in Southern Europe, the author draws upon the history of the Byzantine-Muslim struggle for supremacy, Norman naval expansion in the Central Mediterranean, the Crusades, the Genoese-Pisan rivalry for supremacy in the Western Mediterranean, the war of the Sicilian Vespers between Angevin (French) and Aragonese sea power, and the Venetian-Genoese competition for control of trade routes in the East. In discussing the history of Medieval naval warfare in Northern Europe, Stanton divides the period into Viking raids and conquests, the Norman Invasion and the rise of Anglo-French warfare during the early Plantagenet period, the Hundred Years War, and the military operations of the German Hanse, followed by a conclusion that points to the age of discovery as marking a transition between Medieval warfare and more modern warfare based on ship-destroying canons and centralized state navies, using the Ottoman conquest of Constantinople and its immediate follow-up as a case study in this transition.

One of the striking aspects of this book is that it does not ignore any aspect of naval warfare.  Each chapter of the book contains a detailed case study of the specific area of Medieval maritime warfare in question, ranging from the siege of Constantinople in 717-718 to the Battle of Acre in June 1258 to the Battle of Sluys in June 1340 to the strange voyage of the Saint-Pierre de La Rochelle between 1462-75, which shows concerns of tactics and strategy. The author peppers his work full of specific language, and occasional drawings, that show the technology of shipbuilding in Medieval Europe, as well as maps of battles and theaters of operation, along with a few photos of tapestries and geographic landmarks towards the end of the book. Yet neither does the book neglect less familiar aspects of naval warfare, pointing out the immense achievement of William the Conqueror in using strength in logistics to give him an advantage in his conquest of England, and the pervasive use of blockades and other logistical warfare in the struggles of the Hanse against rivals for control of the Baltic Sea trade, and pointing out the demographic results of massive military losses like the decisive crippling of Pisa’s power after the disastrous Battle of Meloria and the French disaster at Sluys. The author also makes sensible comments on the larger geostrategic importance of seemingly minor matters, like the favoritism shown to the piratical Cinque ports of Southern England and the continual efforts by Normans and others to take places like Malta and the North African port of Mahdiyah.

Given the widespread lack of knowledge of the vital importance of sea power to Medieval military history, this volume provides its readers with a solid education in the campaigns, broader political and technological trends, and strategic aims of the maritime powers of Medieval Europe, the Levant, and North Africa. The author explores the relationship between trade and piracy, points out the rapid development of naval strength in the face of intense competition, and comments as well on the demographic importance of having a well-trained body of seamen with political loyalty to the ruling regime, a factor that could not be taken for granted among Coptic crews of Muslim-led fleets, for example, or untrained landlubbers impressed into naval service without adequate training before being forced into disastrous battles against rival powers.  Whether one’s interest is in the technology of medieval naval warfare, the strategy and tactics of engagements and campaigns, or a study of the complex interaction between naval institutions and the societies that they served and preyed upon, Stanton has crafted a thoughtful work that should encourage more research and writing into the fascinating field of medieval maritime warfare.

Nathan Albright resides in Portland, OR.