DISCLAIMER: This post is related to the 6th Season, 9th episode of the HBO series Game of Thrones titled “Battle of the Bastards.” Although the historical content of the five naval battles included are accurate, its ties to the HBO series remain wholly fictional. [SPOILERS AHEAD] Read a recap of the episode at EW.

The views and opinions represented in this post are personal and belong solely to the author. They do not necessarily represent those of the Naval Historical Foundation, Naval History and Heritage Command, or United States Navy, unless explicitly stated. If you have any questions, please contact our Digital Content Developer, Matthew Eng, at meng@navyhistory.org.

The Story Behind Blood, Bravery, and Intrepid Ships
If you have perused social media within the last week or so, you are likely aware that television history was made. The wildly popular HBO television series Game of Thrones aired their episode “Battle of the Bastards” to over 7.66 million anxious and excited viewers. It was an epic showdown between the armies of Jon Snow and Ramsay Bolton for supremacy of the North. Amidst all the chaos, Jon Snow and House Stark prove triumphant, once again displaying the banner of the dire wolf at Winterfell.

Many reviewers online are calling it the most elaborate battle sequence in television history. The battle itself was meticulously planned and executed, requiring countless stuntmen, extras, and shooting days. Beneath the battle, there is deeper meaning. Can we draw any historical parallels of a battle of pure fantasy with the true wit, heroism, and sacrifice of the men and women of the United States Navy?

Surely. Ready a raven, Lord Snow. You might want to write this down and let the others in the seven kingdoms know.

Real life battles are spontaneous and chaotic, but no less epic. Indeed, history is never so nice and neat to be wrapped up in a one-hour episode. Sets are battlefields, directors are commanders, and eyewitnesses give us the only glimpse into a camera’s eye view of the events that transpired. Battles rage on, casualties rise, and victories are made at a high cost. Our collective knowledge tells us that knock-down, drag out fights have occurred throughout the history of the United States so wars could be won and the freedom and protection of the United States secured. In a figurative sense, the men and women of the United States military have made sure that the banners of our great nation remain intact. The United States Navy plays a key role in that narrative – no extras or stuntmen required.

Here are five epic engagements that give “Battle of the Bastards” a run for its money. READ PART I

“Thousands of men don’t need to die, only one of us. Let’s settle this the old way. You against me.” – Jon Snow

Not all battles end in victory. Some are chalked up to a draw, leaving the historians and enthusiasts to wage new wars over their memory. Battles that end in a draw do not, however, make that specific conflict no less ferocious. After all, it’s not like there was a giant monster on your side to help win the battle (RIP Wun Wun). That is, unless you are the Confederate Navy during the American Civil War. Then you would have the “rebel monster:” CSS Virginia.

As far as naval battles go, no other engagement exemplified the “bloodied nose” aesthetic between pitched combatants like the punishing display of firepower demonstrated by both Monitor and Virginia during the second day of the Battle of Hampton Roads. Think about the fight between Ramsay and Jon in the Winterfell courtyard in the “Battle of the Bastards” episode, but with ships.

At least that is what many newspapers in the North and South waxed eloquently about in the months leading up to the famed Battle of Hampton Roads. For months, both the Union and Confederacy had known about each’s respective design for an ironclad warship, a new and relatively untested form of naval warfare. The new style of warfare brought about new fears from the public and policymakers alike: Virginia could hold Washington, D.C. for ransom, while Ericsson’s “cheesebox on a raft” might be powerful enough to uphold Scott’s “Great Snake” along the southern coastline. Only time would tell.

Like Jon Snow, CSS Virginia was resurrected from death to do battle once again. The rechristened CSS Virginia was built around the lower hull and machinery of USS Merrimack, which was intentionally burned to the waterline and sunk to avoid capture when Confederates took Gosport Navy Yard in April 1861. Swedish engineer and inventor John Ericsson, long known as a pariah to the United States Navy for a mishap involving the death of Secretary of the Navy Abel Upshur in 1844, eventually agreed to build his revolutionary design to meet the Confederate behemoth within 100 days. 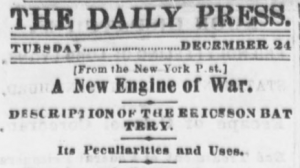 A 20 December 1861 article included in the Memphis Daily Appeal called Ericsson’s design a “terrible engine of destruction.” Ericsson himself made no plan to make his design secret. He wanted everyone to know, including the Confederacy, exactly what they were up against. In turn, Virginia would be slow but powerful, complete with a casemate design of ten cannons and ram to puncture wooden warships in two. By then, Virginia was nearly six months into construction, her designers confident that Ericsson’s design could not penetrate her iron casemate armor and two feet of wood to protect it.

Nobody knew how well either “Ericsson’s Battery” or the “rebel monster” would perform. One thing was clear: they would find a way to meet on the battlefield. That chance came in early March 1862 in the waters off Hampton Roads.

The first day of the Battle of Hampton Roads fared as well as the opening conflict for Snow’s forces in “Battle of the Bastards.” In all, it became the single greatest loss of life for the United States Navy until Pearl Harbor. Virginia steamed out from Norfolk to meet the Union blockade head on. She managed to sink USS Cumberland, force the surrender of USS Congress (ultimately leading to her demise later that night), and badly damage USS Minnesota after she ran aground on a sandbar.

In the middle of the night, Monitor arrived in a panic, still largely uncompleted, to do battle with the rebel monster. Historian Craig Symonds referred to their first view of the battle’s aftermath as a “scene of devastation.” What transpired the next day made history: the first duel between ironclads.

“You suggested one-on-one combat didn’t you. I’ve reconsidered I think that sounds like a wonderful idea.” – Ramsay Bolton

Virginia made her appearance known the morning of the 9th to finish off Captain G.J. Van Brunt and his wounded Minnesota. It was at that moment that Lt. Worden and Monitor made their grand entrance into the fray, promising Van Brunt that he would “stand by you to the last” as he did so. Hollywood could not write a better line. Monitor Executive Officer Lt. S. Dana Greene explained the pregnant moment:

“Our captain…made straight for the Merrimac, which had already commented firing; and when he came within short range, he changes his course so as to come alongside her, stopped the engine, and gave the order, ‘Commence firing!”

Franklin Buchanan and Virginia responded in kind, quickly scoring hits on Monitor’s armored turret. The center held. Virginia’s point blank shot did not penetrate, and the tower remained intact as it continued to rotate and fire. Lt. Greene later commented that the fire between the two vessels soon occurred only a few yards away. This deadly dance continued to rage on for hours. Neither ship managed to cause irreparable damage. 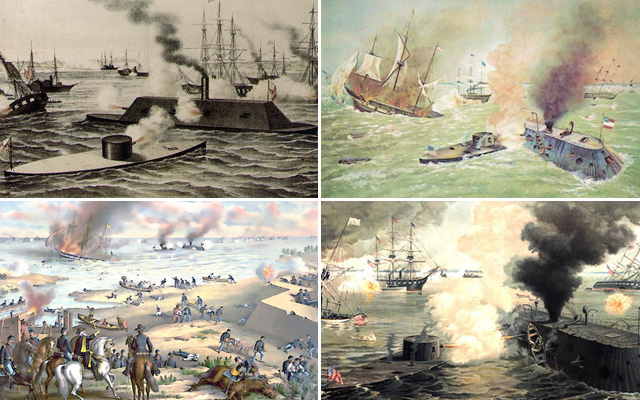 Many paintings depicting the battle have a tendency to summarize the entirety of the two-day conflict in one complete image, thereby showing the destruction of Cumberland and Congress alongside the duel between ironclads. The more realistic paintings show the two ironclads in pitched battle with the surrounding sailors and soldiers watching them in the middle of the water in what Craig Symonds compared to an “amphitheater” akin to the Roman Coliseum.

The fog of war inside Monitor’s turret was as cramped, congested, and terrifying as the scrum of warriors huddled together fighting against the Bolton Army’s shields and lances in the latest Game of Thrones episode. The clang and clamor of shots inside reverberated and echoed loudly, causing some sailors’ nose and ears to begin bleeding who stood too close to the concussive pressure from blasts. And still, both sides continued to fight on in what Tom Cutler called “a determined fury.” One bystander from the shore likened the fire from Virginia to Monitor like “pebblestones thrown by a child.”

Cramped at the Battle of the Bastards and Inside the Turret. At least 18 men were inside Monitor’s turret while in operation. (HBO/MaritimeTexas)

Around noon, a shell from Virginia’s cannon struck Monitor’s pilothouse. Eyewitness accounts place the shot not ten yards from each other. Monitor commanding officer Lt. Worden was standing in the pilot house when the shot struck, causing him to be stunned and temporary blinded. Cutler included a description of the scene of chaos in A Sailor’s History of the United States Navy:

“Worden had taken much of the blast full in his face, and his eyes were filled with smoke and burning powder. He staggered back, his hands to his face, and cried: ‘My eyes. I am blind!’ With blood pouring down his face, Worden was taken to his cabin.”

Monitor disengaged from battle to regroup after the shot to the pilot house. Buchanan and Virginia saw this as their cue to end the day’s fighting. By the time Lt. Greene returned to engage, Virginia was gone. After four hours of intense close-quarters fighting akin to hand-to-hand combat, both steamed away to lick their respective wounds, each claiming victory in the first duel between ironclad combatants. Both vessels did not survive the year, never to face again. Virginia was scuttled and destroyed off Craney Island in May 1862 just before the Battle of Drewry’s Bluff, and Monitor sank off the coast of the Outer Banks on New Year’s Eve. Although history was not kind to the fate of these vessels, their memory and place in the annals of naval history is still secure today.