DISCLAIMER: This post is related to the 6th Season, 9th episode of the HBO series Game of Thrones titled “Battle of the Bastards.” Although the historical content of the five naval battles included are accurate, its ties to the HBO series remain wholly fictional. [SPOILERS AHEAD] Read a recap of the episode at EW.

The views and opinions represented in this post are personal and belong solely to the author. They do not necessarily represent those of the Naval Historical Foundation, Naval History and Heritage Command, or United States Navy, unless explicitly stated. If you have any questions, please contact our Digital Content Developer, Matthew Eng, at meng@navyhistory.org.

If you have perused social media within the last week, you are likely aware that television history was made Sunday night. The wildly popular HBO television series Game of Thrones aired their episode “Battle of the Bastards” to over 7.66 million anxious and excited viewers. It was an epic showdown between the armies of Jon Snow and Ramsay Bolton for supremacy of the North. Amidst all the chaos, Jon Snow and House Stark prove triumphant, once again displaying the banner of the dire wolf at Winterfell. 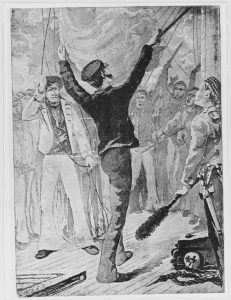 Many reviewers online are calling it the most elaborate battle sequence in television history. The battle itself was meticulously planned and executed, requiring countless stuntmen, extras, and shooting days. Beneath the battle, there is deeper meaning. Can we draw any historical parallels of a battle of pure fantasy with the true wit, heroism, and sacrifice of the men and women of the United States Navy?

Surely. Ready a raven, Lord Snow. You might want to write this down and let the others in the seven kingdoms know.

Real life battles are spontaneous and chaotic, but no less epic. Indeed, history is never so nice and neat to be wrapped up in a one-hour episode. Sets are battlefields, directors are commanders, and eyewitnesses give us the only glimpse into a camera’s eye view of the events that transpired. Battles rage on, casualties rise, and victories are made at a high cost. Our collective knowledge tells us that knock-down, drag out fights have occurred throughout the history of the United States so wars could be won and the freedom and protection of the United States secured. In a figurative sense, the men and women of the United States military have made sure that the banners of our great nation remain intact. The United States Navy plays a key role in that narrative – no extras or stuntmen required.

Here are five epic engagements that give “Battle of the Bastards” a run for its money.

Symbols have an important place in U.S. naval lore. Ask any sailor, and they will name a few. The anchor and chains. The dolphin. Wings of gold. Every sailor, both officer and enlisted, wears a symbol to denote their rank and/or rating.

These symbols are worn as a sign of pride and a marker displaying allegiance. After all, why does every ship in the U.S. Navy today have a seal or crest? Are things so different in the world of Game of Thrones? Bloggers and critics worldwide are still debating the symbolism of Jon Snow’s use of the House Mormont shield to deflect his enemy’s expertly aimed arrows in the most recent episode of Game of Thrones. The shield has meaning, just as medals do to sailors. These symbols become much more than painted images on flags, shields, and steel. Their imagery also helps boost the morale and fighting spirit of combatants during battle. This was the case during the Battle of Lake Erie when a young and daring commander named Oliver Hazard Perry used five words to rally his rag tag group of sailors and volunteers to the Navy’s most decisive victory during the War of 1812: Don’t Give Up the Ship. Like a sigil on a shield, “Don’t Give Up the Ship” became a powerful message the U.S. Navy adopted and continues to use today.

Things did not look hopeful for Oliver Hazard Perry in the Summer of 1813. After receiving the order to take command of naval forces along the NW frontier of Lake Erie earlier in the year, he set about the arduous task of securing or building ships for battle. His orders were simple enough: defeat British forces and gain control of Lake Erie. The only problem was that he didn’t have any ships to fight with. Engagements along the lake remained stagnant at best in the winter and spring of 1813. While the rest of the Navy fought in epic ship-to-ship conflicts in the high seas to the delight of American newspapers, the war in the Northwest remained relatively quiet until things began to heat up with the coming summer months.

Perry’s British adversary on Lake Erie, Commander Robert Heriot Barclay, was no Ramsay Bolton. A battle seasoned naval officer who cut his teeth at the Battle of Trafalgar during the Napoleonic Wars, Barclay took command of a detached squadron of British ships on Lake Erie. During the beginning of the summer, Perry and Barclay sat at their bases of operation on the lake, calculating the best time to strike. Procuring ships to fight, however, proved no easy task. If there ever was an early version of an arms race in the young Republic, it first occurred along Lake Erie during the War of 1812. Perry and the Navy set about building ships and procuring men and materials to help protect his base of operations at Presque Isle shipyard. By the middle of the summer, Perry’s shipbuilding plan seemed to work. He built a fleet of two brigs, three gunboats, and a pilot boat that outnumbered the British fleet. There was only one problem: manpower. Added to the stress and confusion for Perry was the news that his good friend James Lawrence, commanding officer of USS Chesapeake, was killed in an engagement with HMS Shannon near Boston. Perry used his friends dying words “Don’t Give Up the Ship” as motivation to press on, eventually using it as his personal battle flag made for him. As an added honor, he named one of the brigs built as his flagship after his friend, Lawrence. On the other side of the water, Barclay took the opportunity to continue to blockade Perry in at Presque Isle at the end of July.

Eventually, the blockade was abandoned, allowing Perry and his ships to escape. Soon, men and materiel from the east, along with a small continent of Major General Harrison’s Army of the Northwest, swelled Perry’s meager ranks at Put-in-Bay, Ohio. Barclay, now unable to move at Amherstburg, had little choice but to meet Perry’s makeshift in battle. 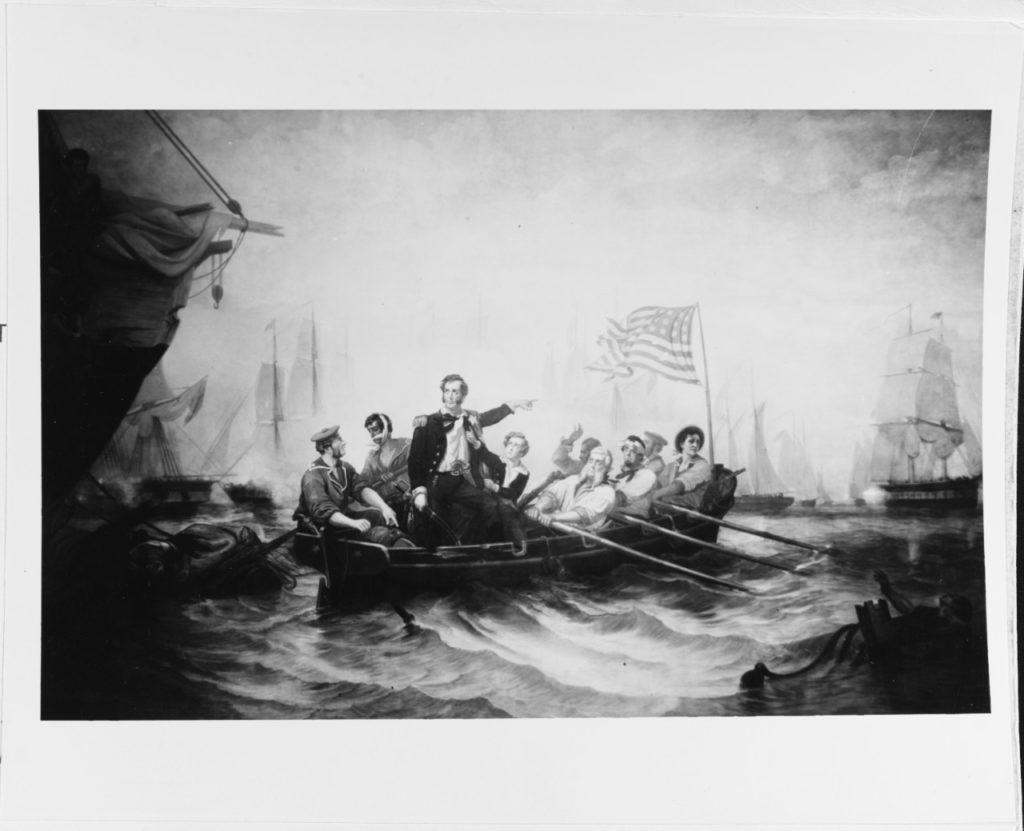 Painting by William H. Powell, depicting Commodore Oliver Hazard Perry transferring his flag from the disabled U.S. Brig Lawrence to the U.S. Brig Niagara, at the height of the action. (NHHC Photo $# KN-621)

The battle began in the late morning of 10 September. Perry discovered Barclay coming down from Malden harbor with purpose to attack and immediately set out from Put-in-Bay to fight with the flag of his friend’s immortal words high atop the masthead of Lawrence. One account stated how “every heart was electrified,” with crews cheering as they sailed to battle. Both squadrons lined up in line of battle formation when the first shots were fired around 11:45am. Unfortunately, the wind soon favored the British. Perry intended to take advantage of the carronades and avoid the British long guns at a half-mile distance but failed to do so. Like a barrage of long arrows, the long ranged fire from the British began. HMS Detroit opened a heavy barrage of her long guns onto Lawrence for nearly twenty minutes, inflicting heavy damage and causing many casualties. Naval surgeon Usher Parsons referred to the first shot of the battle as an “electric shock.” Detroit and Queen Charlotte, two of the biggest British ships, wasted no time and steadily pounded Lawrence into submission. Things looked grim for Perry and his fleet at the outset. Like Jon Snow, the tide needed to be turned, and quickly. An American eyewitness described the carnage:

“The loss of the Americans was severe, particular on board the Lawrence. When her flag was struck she had but nine men fit for duty remaining on her deck [. . .] Her deck, the morning after the conflict [. . .] exhibited a scene that defies description- for it was literally covered with blood, which still adhered to the plank in clots – brains, hair and fragments of bones were still sticking to the rigging and sides.”

“In proper time however as it proved, the dogs of war were let loose from their leash, and it seemed as though heaven and earth were at logger-heads. For more than two long hours, little could be heard but the deafening thunders of our own broad-sides, the crash of balls dashing through our timbers, and the shrieks of the wounded.”

With four fifths of his crew either killed or wounded, Perry decided to transfer his flag to Niagara, flag in tow, gallantly rowing through heavy gunfire while Lawrence was surrendered. Although the American fleet was battered, their British counterparts didn’t fare any better. Both Detroit and Queen Charlotte were badly damage from the battle, with most of their crews killed or wounded. Barclay himself was wounded from the engagement.

The “Sansa/Little Finger cavalry” moment that saved the day came when Perry, once safely aboard Niagara, chose to steer his remaining ships into close action with Barclay’s battered vessels. By this time, Detroit collided with Queen Charlotte, giving more opportunity to Perry to strike. Barclay mistakenly believed Perry would take his bloodied fleet back to Put-in-Bay to lick their wounds. But wind was finally in Perry’s favor, and he used it to his advantage to break through the British link and fire crippling broadsides against them. Detroit and Queen Charlotte could do nothing and surrendered by 3:00pm. The remaining British ships attempted to escape but were soon captured. Perry turned the tide. The surrender took place on the recaptured Lawrence. In the end, symbolism proved true: Perry did not give up battle, or the ship named after his dear departed friend. Perry took a moment to pen after the battle to pen his famous message to General Harrison:

We have met the enemy and they are ours. Two ships, two brigs, one school and one sloop.

Americans controlled Lake Erie for the remainder of the war. What will Jon Snow’s success mean for the future of Winterfell?