“The tide rises for all of us as we help build a strong future for the heritage and maritime community.” – Capt. Jim Noone, USNR (Ret.), NMAD Co-Chairman (Photo courtesy Joe Rudinec/Rudinec and Associates/Released)

The National Maritime Historical Society (NMHS) and Naval Historical Foundation (NHF) hosted a gala event at the National Press Club on 21 April to honor the achievements of three individuals who have made lasting contributions to maritime and naval heritage. Formerly known as the Washington Awards Dinner, the newly rebranded National Maritime Awards Dinner has grown to become a signature event in Washington, D.C. in recent years to celebrate those who have made significant contributions to broaden our nation’s maritime and naval heritage visibility.

For those who could not attend NHF’s  90th Anniversary event back in March, the dinner also provided the opportunity for NHF Chairman Admiral William J. Fallon, USN (Ret.)–who took over the helm from Admiral Bruce DeMars, USN (Ret.) in December of last year–to describe NHF’s mission and accomplishments.

Over three hundred guests, many representing organizations that promote maritime and naval heritage, enjoyed an evening of shared commitment and camaraderie overlooking the White House and downtown Washington. Throughout the night, the theme of support and giving came up often. Contributions from generous donors are critically important for these two nonprofit organizations to continue to thrive. This support was clearly evident in the many individuals who bid during the silent auction held before the dinner. The auction offerings included spectacular nautical memorabilia, artwork, VIP insider tours, and vacation packages.  Each successive bid was a commitment to preserving and honoring this nation’s rich and storied maritime and naval legacy. An engaging live auction was also held during the dinner itself, which included a chef’s dinner at Philip’s Seafood for eight and embarkation for a parade of sail aboard the schooner Sultana. The most sought-after prize of the evening, however, was a fantastic 10-night trip cruise package for two to Cuba aboard Pearl Sea Cruises. A number of individuals also directly contributed to the educational programs of NMHS and NHF, which will continue to underwrite a broad range of initiatives carried out by both organizations. A special thanks to all of the auction donors involved in the dinner! 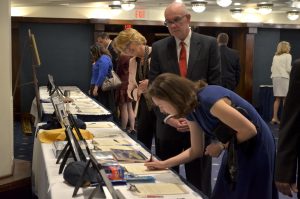 Dinner Co-Chairman Captain Jim Noone, USNR, (Ret.), a member of the NHF Board of Directors, opened up the formal awards program with a brief summary of the three individuals being honored: Philips Foods and Seafood Restaurants owner Stephen B. Phillips; American Cruise Lines and Chesapeake Shipbuilding founder and CEO Charles A. Robertson; and Executive Chairman of Enterprise Holdings Andrew C. Taylor.  As Noone suggested, each of the recipients received their awards in front of “representatives from virtually the entire spectrum of the maritime community.” Through their dedication and philanthropic spirit, each recipient gained stature in the maritime industry and professional world through hard work, and a core dedication to understanding and supporting this country’s deep connection to the sea.

Stephen B. Phillips and Charles A. Robertson received the National Maritime Historical Society’s Distinguished Service Award. Both recipients embody the spirit and core mission of NMHS through their lasting contributions to the maritime industries of the United States. Stephen Phillips deflected attention from his own accomplishments and instead accepted the award on behalf of the men and women serving our country today at home and abroad. “Even the lowest pay scale in the Navy today deserves this honor more than I do,” he said. American Cruise Lines CEO Charles A. Robertson accepted his award and spoke about the evening’s theme of support:

“I know the importance of maritime history and the important work that the National Maritime Historical Society does for the nation [. . .] It’s a wonderful thing to be involved in preserving this heritage.”

For the Naval Historical Foundation, the highlight of the night was the presentation of this year’s NHF Distinguished Service Award to Enterprise Holdings Executive Chairman Andy Taylor. Andy was introduced by Admiral Sandy Winnefeld. Recently retired as the Vice Chairman of the Joint Chiefs of Staff, Winnefeld was the commanding officer of USS Enterprise (CVN 65) during her 20th deployment, at the opening of Operation Enduring Freedom following the September 11, 2001 terrorist attacks on the US. Admiral Winnefeld talked briefly about “the remarkable connection that the Taylor family has with the United States Navy.” Andy Taylor’s father, Enterprise Rent-A-Car founder Jack Taylor, was a combat pilot who flew F6F Hellcat fighters from USS Essex (CV 9) and USS Enterprise (CV 6) during World War II. He eventually named his new car rental company after the Enterprise. 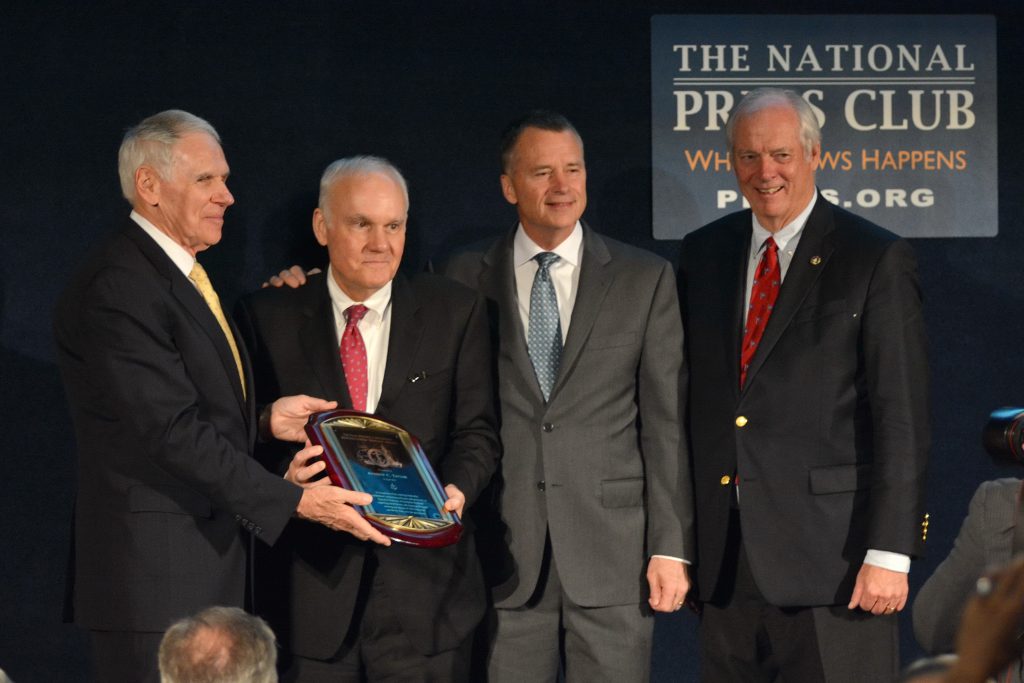 Although his son Andy did not serve in the military, the business practices and ideas distilled from his father have helped Andy grow the company to its worldwide prominence today, and to help those who have served and continue to serve their country in the military. Enterprise is a universally acknowledged supporter of military veterans, and continues to actively hire men and women rotating out of their military careers. That fondness and respect for the U.S. military is a core reason why Andy, the Taylor family, and Enterprise Holdings is so deserving of this award. Among other philanthropic contributions, the Taylor family set up the USS Enterprise student scholarship administered through the Wings Over America Scholarship Foundation, and continues to help build Fisher House accommodations around the country to support wounded veterans and their families. Although CVN 65 is no longer in service, the Taylor family is engaged in promoting the “Big E” legacy for future generations—particularly now that Secretary of the Navy Ray Mabus has announced that the the name Enterprise will be bestowed on CVN 80, which should join the fleet in the mid-2020s. “Of all things,” Winnefeld closed with, “(Andy) is a great American patriot and businessman quietly making great things happen with other people.” 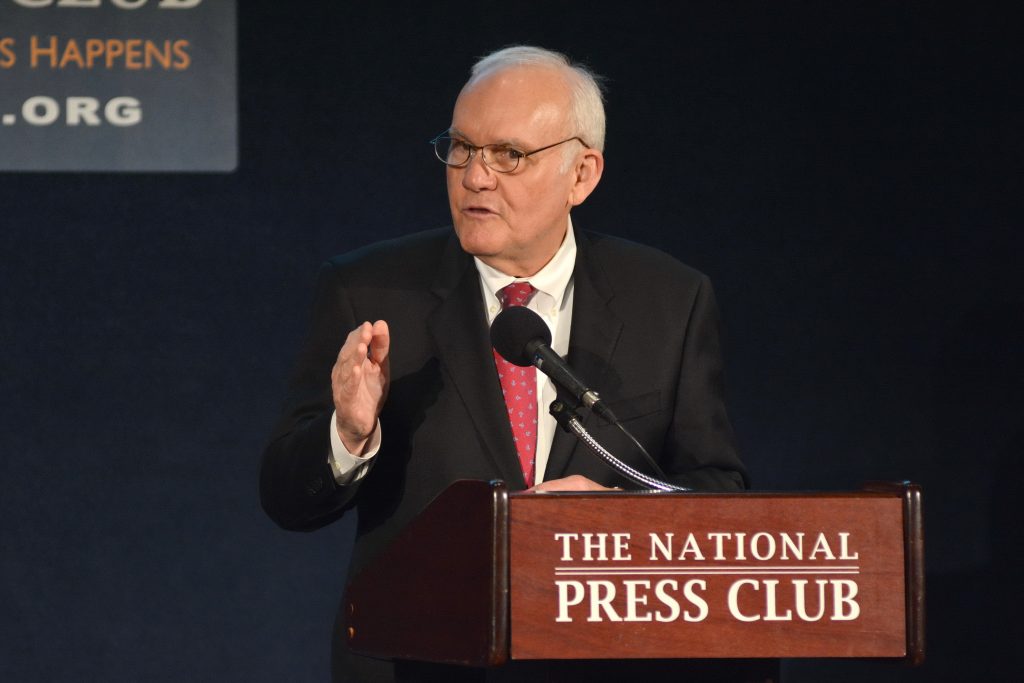 As a tribute to the Taylor family patriarch Jack Taylor’s World War II service, NHF Chairman Admiral Fallon presented Andy and his family with several framed photographs of Enterprise (CV 6).  Andy Taylor spoke briefly about the honor of the award. “I am proud to continue my father’s Navy legacy,” he said in his acceptance speech. His final remarks about his father echo the unique way naval history comes together, and continues to enthrall us today: