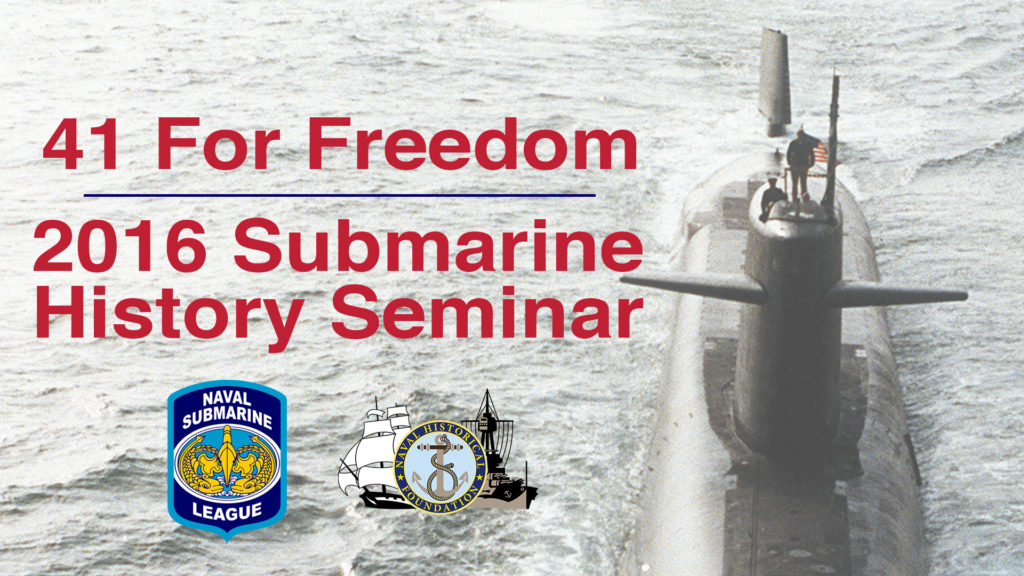 “I don’t give a damn whether it is a ballistic missile or an air breathing missile, or both, so long as it will go about 1500 miles and hit the target with a warhead capable of doing the job.”

The United States Navy kept busy during the Cold War. Between the “hot conflicts” in Korea and Vietnam, the United States Navy created the Fleet Ballistic Missile (FBM) program to meet the need for a credible sea-based deterrent. Under the consistent threat of nuclear war, the United States needed to act fast, and did so accordingly. Its chosen platform for the missiles was the nuclear submarine. Both swift and silent, these newly classified ships could fire submarine-launched ballistic missiles (SLBMs) against any foreign threat with remarkable accuracy and at great distances.

In the span of seven years (1958-1965), forty-one nuclear-powered ballistic missile submarines (SSBNs) were built in four shipyards around the United States. The U.S. Navy accomplished the nearly impossible task of creating the sea-based deterrent ahead of schedule. Both more accurate and less expensive than the intercontinental ballistic missile  (ICBM) , the SLBMs included in each of the aptly titled “41 for Freedom” submarines greatly increased the Navy’s own capabilities and the country’s need for nuclear deterrence. Veterans, scholars, active duty military, and members of the Naval Submarine League and Naval Historical Foundation met last Wednesday for the annual Submarine History Seminar honoring the men and machines that protected all Americans within our shorelines throughout the Cold War. 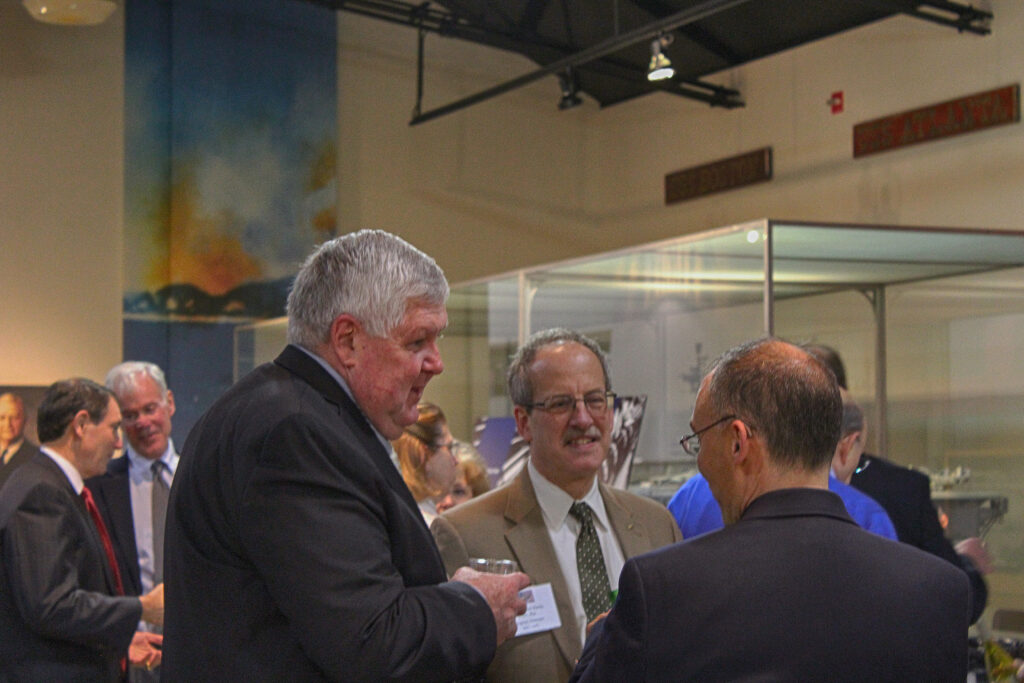 Guests socialize during a reception held in the Cold War Gallery before the Seminar began. (NHF Photo/Matthew Eng/Released)

This year’s program built on last year’s seminar which focused on US-UK strategic missile and submarine development and cooperation over the course of fifty years. Part of that cooperation over that time period included the development of the POLARIS, POSEIDON, and TRIDENT missile systems, which were featured prominently on the “41 for Freedom” boomers before their retirement.

Dr. Rosenberg envisioned presenting attendees with a well-rounded approach to understanding­­ the vast and multifaceted world of ballistic missiles – from their creation and construction to the maintenance and performance of the Navy’s great underwater force for peace. Unlike previous seminars, several presentations were recorded before the event ­due to the rigors of travel for our speakers to and from the Washington Navy Yard.

The formal presentations opened with a brief video explaining the historical antecedents of the Fleet Ballistic Program from the point of view of the organization tasked with creating the weapon system itself, Special Projects, now the Strategic Systems Programs office.

The video came from the archives of SSP, which Dr. Rosenberg remarked was “a piece of 30-year old history itself.” It was narrated by former SSP Director Vice Admiral Ken Malley in honor of SSP’s 35th anniversary in 1990. The video included rare interviews about the FBM program from Admirals Arleigh Burke and Hyman G. Rickover.

“For practically unlimited distances under the water, I consider that she’s a new weapon, and that she may have as profound an effect on naval tactics and strategy as the airplane has had on war.”

The video details the impressive feat done by SSP and their brilliant and innovative leader Vice Admiral William “Red” Raborn to create an operational system five years ahead of schedule. The video is posted below.

Dr. David Rosenberg – Polaris: Why, What and How 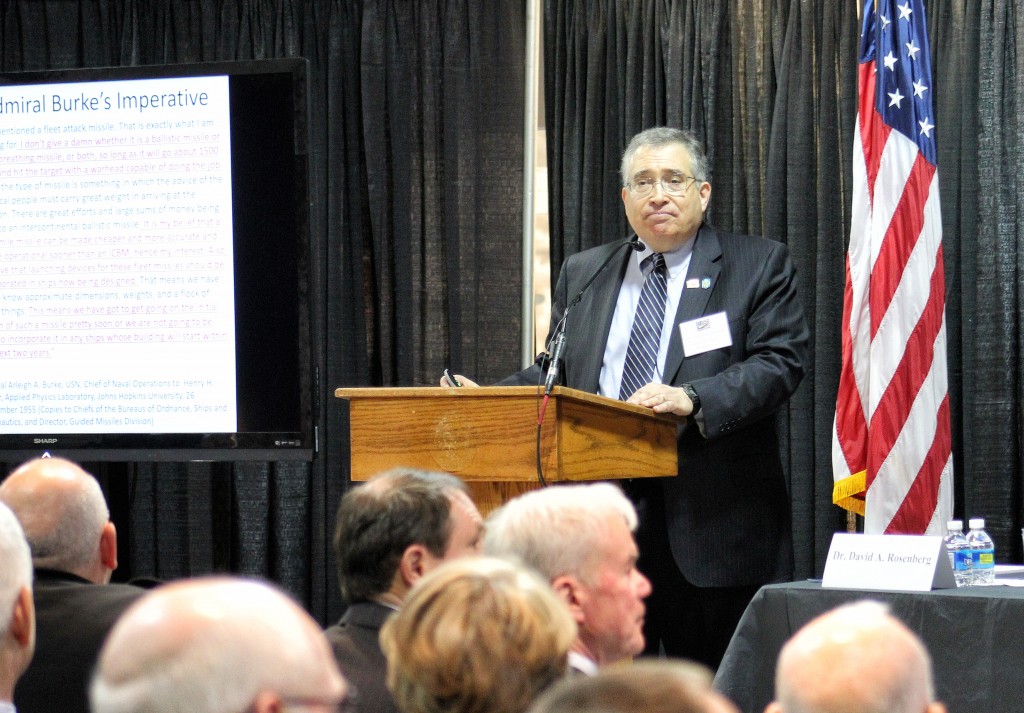 Dr. David Rosenberg next educated attendees with background to the Navy’s POLARIS missile as a weapon of deterrence and its inclusion in the FBM program under the direction of Admiral Arleigh Burke. Burke, a naval officer who “knew technology,” helped the Navy toward a path of adopting ballistic missiles. In the words of Rosenberg, an expert on Burke, Admiral Burke wanted to develop a program before the rival Air Force because he felt it was unwise to “put all missile deterrent in one land-based basket.” Thankfully, Burke was right. He knew that submarines [then SS(G)N)] would be the “optimum launching vehicle in terms of survival and economy of force.” As a man who was as wise as he was opinionated, he also understood the importance of leadership, which is why he chose former WWII Aviator “Red” Raborn to lead the program.

Rosenberg talked briefly on Burke’s own leadership style and direction. His dry humor is clearly evident in the last line of what Rosenberg called then Rear Admiral Raborn’s 2 December 1955 “Hunting License:”

The next report on this should be made by somebody who is enthusiastic, who gives evidence of his enthusiasm, and whose knowledge demonstrates that he has a thorough grasp of the problem and is pushing ahead a little bit faster than anybody else could.

He ended his talk with a discussion of the first operational patrols of SSBNs with POLARIS A-3 missiles in 1964 and 1965 in the Pacific Ocean. These patrols helped make POLARIS a name synonymous with the “41 for Freedom” ballistic missile submarines.

The next presentation came from a recorded oral history interview with former shipbuilding supervisor Captain Patrick G. O’Keefe (Ret.) and former ship superintendent of Portsmouth Naval Shipyard Rear Admiral Millard S. Firebaugh, USN (Ret.). O’Keefe and Firebaugh approached the history of the “41 for Freedom” ships from a construction, maintenance, and modernization perspective. Both men played a heavy hand in each integral part of the SSBN life cycle. O’Keefe had notable experience for the job, as he took part in the first nuclear refueling of USS Nautilus, a feat never done before. Laughing reminiscently to himself, O’Keefe remarked after discussing the refueling of Nautilus that the “next big jolt” was the conversion of an SSBN, once again never before done in history. As he later said, the SUBSAFE overhauls specifically were always “full of adventures” due to the “tremendous amount of ripout” required to safely and properly outfit the ship for operation. These first SUBSAFE overhauls, nuclear refueling, and conversions Rear Admiral Firebaugh mentioned could include anything from messy cleanups due to a runaway sanitary tank hose to middle-of-the-night shouting matches over pipe fitters. Captain O’Keefe helped put all of that necessary work performed at the shipyards into perspective:

“At that point, we were scared to death of what the Russians were doing, and we needed SSBNs on station. When they put one into a shipyard [. . .] you gotta get it out on time and it’s got to work, so the pressure was pretty severe.”

Firebaugh ended the video with a commentary on the growth of the program from the early days. At the time, only a small contingent of leadership existed, which “intensely coordinated” all of the necessary activities for boomers. “In that era of NAVSHIPS,” he said, “there was one engineering duty Captain responsible both new construction and overhaul and maintenance of those ships.” Today, there are two completely different organizations that run these tasks, complete with Flag officer and staff members. “It’s a commentary on what happens to programs as they mature,” he said.

Captain James C. Hay, USN (Ret.) discussed the performance of the “41 for Freedom” submarines from the command and operational perspective over the course of his illustrious career in his video interview. Hay commanded two SSBNs from 1967 to 1972, USS Daniel Boone (SSBN 629) and USS George C. Marshall (SSBN 654). Interestingly enough, Hay had never stepped foot onboard an FBM submarine until he took command of one! From a command perspective, Captain Hay had interesting remarks about the “BN business” in the U.S. Navy. After the previous discussion about their maintenance and construction by O’Keefe and Firebaugh, it is easy to understand why Hay had such a glowing review of the FBM subs:

“The 640s were beautiful ships. They were easy to drive, easy to run, and they were all built as POLARIS A-3 boats. Everything ran well in the FBMs at that particular time. The first five (Washington-class) had to pioneer what was to be done and what the meaning was of ‘full readiness:’ every second ready once you were on alert. Things got much better as the boats improved through the 608s [. . .] Finally with the 640s, it was very well done and everything ran beautifully on the ships.”

But things didn’t always go smoothly for the SSBNs. Hay’s personally recalled a situation on one of the Benjamin Franklin-class submarines when both of the Ship’s Inertial Navigation System (SINS) went down. “You are really in a big problem when that happens,” Hay said. The executive officer of USS Stonewall Jackson, then LCDR Bob Bovey, went into the software himself to examine the equations for earth rotation. He personally found an error and corrected it, bringing up both SINS. There is certainly a reason why Hay referred to Bovey as “one of the smartest guys in the United States Navy.”

Although he had initially requested command of a fast-attack submarine, Hay felt SSBNs were “exhilarating,” and felt there was an awful lot to know and teach to his sailors. In his words, he “did not lack for something to do on patrol, nor did any of our guys.” 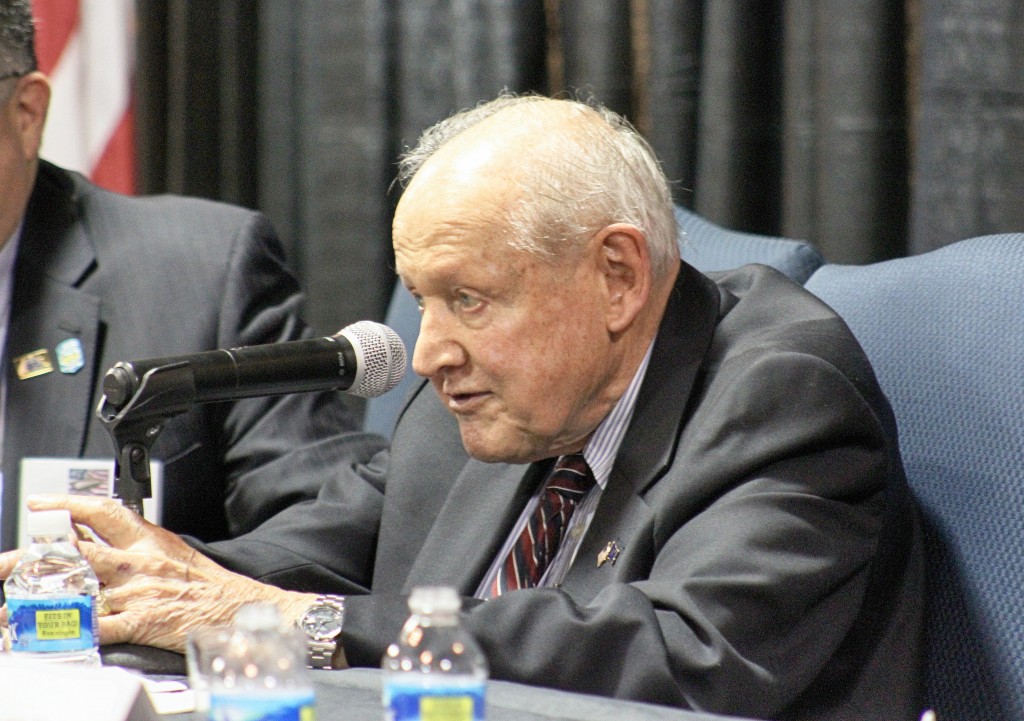 The final presentation of the night came from the personal experiences in command by Vice Admiral James A. Sagerholm, USN (Ret.). Vice Admiral Sagerholm did not take the normal route to the Navy’s gateway to the SSBNs, the U.S. Naval Nuclear Propulsion Program. After enlisting in the Navy in 1946 and graduating from the Naval Academy in 1952, Sagerholm served in the surface fleet aboard cruisers, minesweepers, and destroyers. It was not until 1963 as a LCDR did he finally go to submarine and nuclear power training. Interestingly enough, his first introduction to the nuclear power program  came from then Captain James L. Holloway III. Holloway was in Washington and set to become the commanding officer of USS Enterprise, the first nuclear-powered aircraft carrier. Holloway sat down with Sagerholm before his infamous selection interview with Admiral Rickover to tell him the ropes of the dreaded sit-down. “Whatever you do,” Holloway told him, “make sure you answer his questions completely.” Sagerholm did. According to him, he was asked how long he had been married. After a verbal tug of war between the young LCDR and fiery Admiral, Sagerholm answered him to the hour correctly, thus earning him a spot in the coveted program.

After completing the nuclear training program, Sagerholm was amazed by the level of cooperation and sophistication given to the submarine fleet. Like Hay, Sagerholm had nothing but good remarks to make about the “brilliantly constructed organization” of the nuclear fleet. “Unlike the surface fleet,” said Sagerholm, “you had everything available to you.”

The 2016 seminar was filmed for the Naval Submarine League (NSL) by Empire Media Group, and will be available through the NSL as are recordings or transcripts of all past Submarine History Seminars.  The seminars began with the 29 April, 2000 three session: “Rickover, Submarines, and the Cold War” at the Navy Memorial Theater and Heritage Center: Nuclear Power Comes of Age, Designing and Building the News Subs and their Payloads, and Silent and Stealthy Sentinels-Their Contributions to Cold War Victory.  All past seminars were summarized in our Spring 2014 issue of Pull Together.